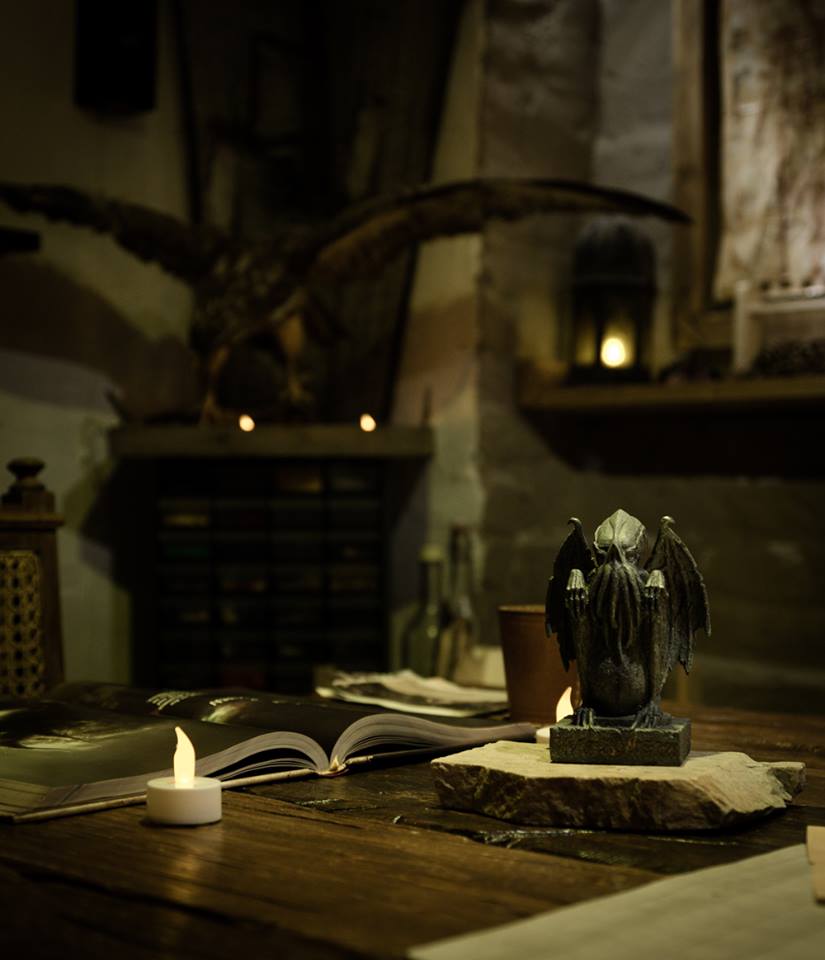 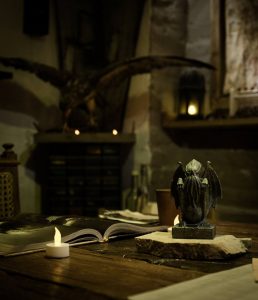 Recently I’ve found myself playing a lot of Call of Cthulhu at conventions.  I suspect perhaps the Old School fad is simmering down, and there are some cons I attend that simply don’t have anything old school at all.  The one stand-by that appears at every convention that does appeal to me though is Cthulhu.

I’ve played enough by this point to know that I’m not terribly impressed by the official system.  And I’ve certainly played in several games that use a totally different system or invent their own.  When I think Cthulhu, I think more of tone and content than any specific rules system.  It seems the point really is to find a system minimalist enough to get out of the way of the roleplaying and story telling.

In my opinion, a Cthulhu game is only successful if I go insane or die horribly by the end.  I only play it at conventions or as one-offs, so I don’t really understand the idea of a Cthulhu campaign, and convention games that don’t end in one extreme or the other feel a bit tepid to me.  My goal in playing is therefore to watch my character confront horrors unknown to man, and delight in how it causes him to either un-hinge and/or jump head first into doomed heroics.  Thinking of the game analytically, I came to the realization that Cthulhu is probably the most demanding style of roleplaying in terms of pacing.  Assuming all players at the table have the same desire for their characters, the GM must very carefully pace out the content to allow each player to have a satisfying arc.  For this to work for even 4 players, never mind 6 or 8 seems impossible.

This problem was percolating in my head during the drive home from the last Carnage on the Mountain, and I started to devise an idea for an insanity mechanic that would put more power into the player’s hands to pace out their decline themselves.  What I came up with is the deck of cards pictured here.  There are only five different cards in the deck: Anger, Obsession, Paranoia, Delusions, and Fear.  They describe broad reactions a character might have to confronting unspeakable horrors.  Each card then lists five levels of the particular reaction, in order of ascending severity.  For example, here’s the first three levels for Paranoia:

1. What Was That? – You have a vague feeling like something is watching you. Sometimes you glance over your shoulder and think you see or hear something when nothing is really there.

2. My Things! – Pick a small object in your possession to misplace. Discover it is missing and assume someone stole it. Start asking probing questions to try and ferret out who took your missing possession.

3. Not Sure About That Guy – Pick one player or NPC that you suspect is working against the group’s best interests. Subtly try to convince others of his guilt.

You’ll notice each level tries to list some specific examples of behavior a player can evoke in his roleplay.  I also made an effort to encourage players to involve others at the table in their insanity, as you can see in #3 above.  The point is to give some solid direction to the player so they feel like they’re losing control, while leaving it open enough for them to take it whatever direction they find inspiring.

So here are the mechanics on how the deck works.  Each player starts with a hand of 2 or 3 cards, I’ve tried both, I’m not sure which is better yet.  When the GM decides a player should take some sanity damage, he instructs the player to draw cards from the deck.  Maybe 1 card for a sort of normal but horrible experience, like witnessing extreme violence, or 2 to 3 cards for witnessing supernatural horrors.  The player must then play cards onto the table in front of him until his hand is back to the original starting size.  Cards can be played in one of two ways:

The idea should be that players can pace their progression towards insanity themselves.  They can strive to get all 5 cards face-up and spread out their face-down cards amongst them, thus absorbing the damage and keeping their sanity relative in-tact, save for a few minor odd behaviors.  Or they can go all in right away and just dump cards into a single stack to go off the deep end.  Or maybe they start by spreading it out, and as they see the evening is coming to a close they switch to dumping cards underneath their favorite insanity.  The GM then controls the pacing at a coarser level, just keeping an eye on how many cards each player has and trying to find opportunities to hand out more.

I’ve run this a couple of times and I think it works pretty well.  I use Savage Worlds for an underlying system to give me stats, skills, and combat mechanics, but I rip out a lot of standard Savage World stuff to keep it as simple as possible.  (For those that know the system, I ditch bennies entirely, as well as the Shaken status, just moving on directly to wounds.)  I chose Savage Worlds mostly because I wanted something I’ve used a lot that would be very easy for me to rule off the cuff without looking up anything in a book.  The funny thing is originally I also ditched exploding dice, but later I added those back in.  I actually kind of like the idea that the system allows for wild success in mundane tasks.  Oh, you’ll still quickly become overwhelmed by things far too powerful for you, and die horribly or go insane, but hey, why not enjoy those couple early successes before we get there?

The other thing I found I really like about this mechanic is that I don’t have to break into play to resolve an insanity.  It’s all on the table right in front of the players, and they probably even had a little time to plan how they would roleplay out the specific insanity they are working towards.  And frankly, I’m often surprised myself at the result, as I don’t really pay attention to whose playing which cards, until suddenly someone starts asking me what the voices say, or where they can find a deadly weapon.

If anyone reading this has played in one of my games, I would love to hear your opinions on how it worked.  Or if anyone tries this themselves please do report back.

UPDATE: You can now buy the new version of these with fancy graphics and more cards here at the game crafter!