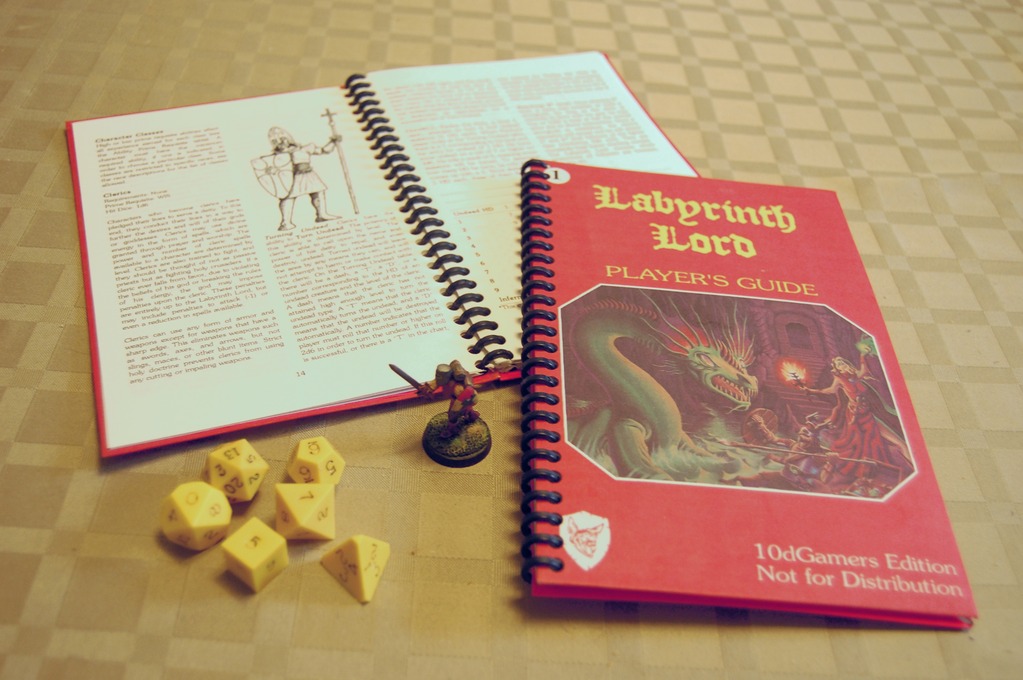 I’ve been house ruling my game a lot recently, enough so that I was starting to worry that I was really trying my players’ patience.  I don’t think they mind so much my mucking with the rules, but they do like to know where to look for the correct rules, and we were starting to collect quite a pile of printed house-rule sheets around the table.  Last weekend was a long weekend with not much to do, and so I created this little crafting project to solve my problem: custom player guides.

Basically I took the LL text, reformatted it into booklet size, and edited it to incorporate all my house rules.  Much of this was house-ruling back stuff from B/X, including the original spell list and armor types.  That’s why I went with a style that’s clearly aping the original B/X style.  I also wrapped in my recent reinterpretation of the silence spell, as well as my custom rules for race/class division.  Also I inserted a couple of the brave halfling classes we’ve been using.

Actually, the fact that I had already produced a booklet of the B/X spells was a big part of the reason I did this, figuring I had already done half the work.  I only included the first five sections of the LL text, and these I edited down a bit in places to get the page count down to a nice trim 64 pages.  I created the covers by simply wrapping paper around some cereal box cardboard, and bound the thing using this device bought on Amazon, which has the added benefit of being re-openable so I can replace pages if I need to edit it more.

All in all I’m pretty happy with the outcome.  I know I’m probably stretching “fair use” a bit with the art and whatnot, but I figure these books basically live at my table and I purchased all the original works, so it’s probably OK.  I stuck a “Not for Distribution” warning on the front there just in case.

We played with them last night, and I think we’re still getting used to it, but it was nice to have everything in one spot.  In any case, at least my players will now be too distracted by the pretty packaging to notice all the mucking about with the internals I’ve done.