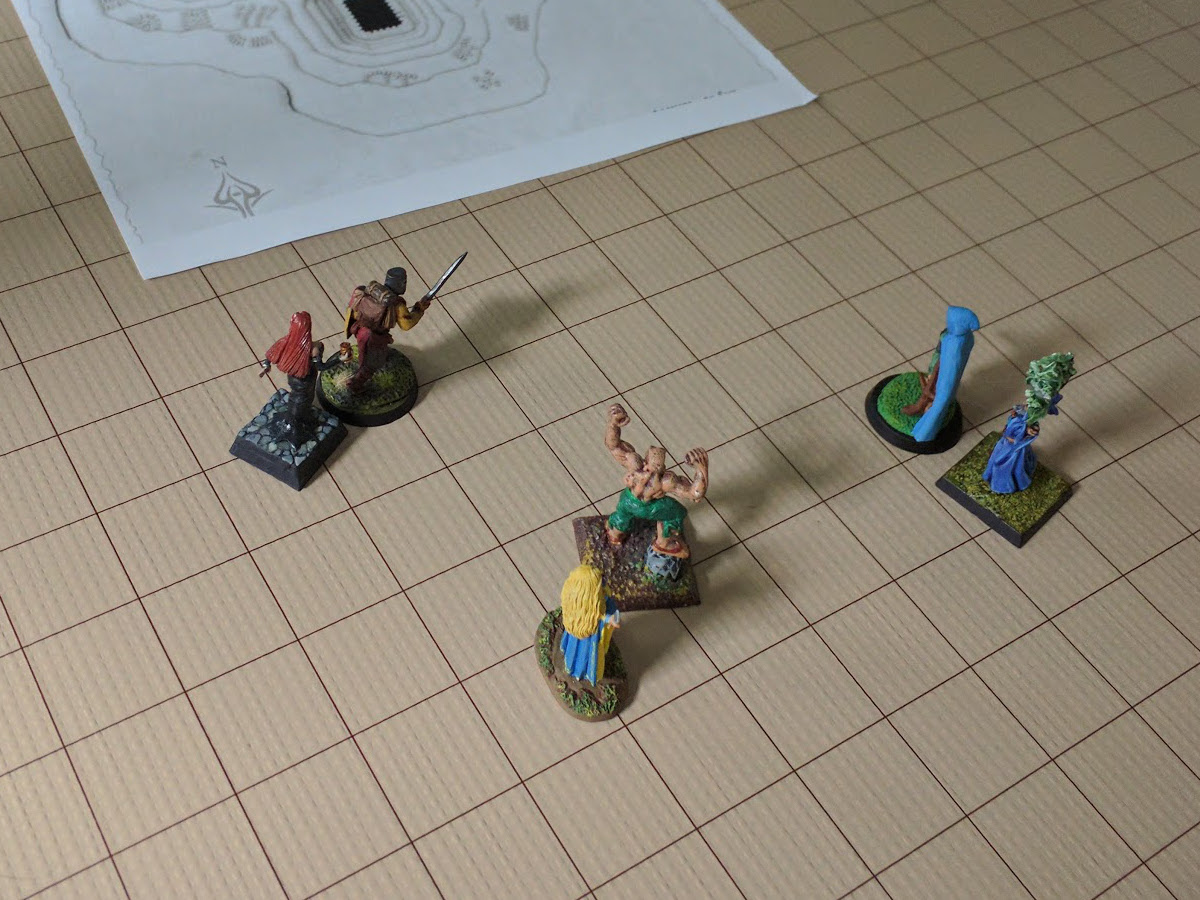 I love collecting and painting miniatures, but I don’t use them in my D&D games.  Except when I do.  And even then I don’t really.  What the heck am I talking about?  Well, it’s complicated…

As mentioned before, I like my combat in D&D to be fast and loose.  I like complicated scenery for the players to bounce off of, and I feel like keeping it descriptive rather than playing with minis and a board makes it feel more immersive and cinematic.  Especially for quick combats, like fighting a couple goblins in a hallway, there’s not much need for complicated positioning and I think it just slows things down.  So when I started running old school D&D I ditched the minis and have never regretted it.

Now, the one tactical piece of info I do find minis useful for at every session is marching order.  Sure, I’ve played it plenty of times with the players writing their order down on a piece of paper, but it’s just always slower to write out names, erase them when you want to move them around, etc.  Having a handful of minis at the table makes it very easy to quickly shuffle into a new formation that immediately conveys for the entire table how the player are marshaling themselves.

I think this also plays well into the nature of minis.  We all dream of a tale full of beautifully painted minis in our games, but the reality is that we often have stand-ins, partially painted minis, or even just a die to hold the place of a thing we don’t have the perfect model for.  This is especially true for monsters – players at least tend to hang on to their characters longer and perhaps care enough to find the perfect mini.  On the DMs side of the screen variety is key, so making a special mini for something that’s going to last one session rarely feels worth it.  Limiting the minis on the table to just the players really helps keep the visual quality up.

Now, once there are minis on the table I’ll often push a little past marching order and use them for rough grouping.  This comes up naturally when say the party splits (always a mistake as we all know, and yet it happens so often).  We make two groups for separate marching orders separated by several inches of empty table space and everyone gets it.  Sometimes this also comes during combat even when the party hasn’t split.  If two or three fighters are holding a choke point while the rest of the party hangs back to sling spells and ranged weapons, it’s nice to push the two groups of minis apart.  As DM I can glance quickly and know generally which group any player is in, and when I want to choose targets for my bad guys I’m reminded of who is within reach and who is not.

We’re getting closer now to full on battle-mat and 5′ squares, but it’s still pretty abstract.  Sometimes I’ll have three or more groups of minis, if say this group is fighting these mooks over here while this other group has managed to close with the boss, and this magic-user is off on his own flying 50 feet above the battle.  I still find this method preferable to counting squares and moving minis around on a battle mat.

And yet sometimes the battle mat does come out, especially for big “set piece” combats, where there are lots of interesting tactical elements to the architecture (maybe a balcony or lava pits) and/or several different combat groups.  Positioning starts to become even more important (who is going to get hit by this fireball?) and the players practically demand the detailed positioning you can only get with miniatures.  Sometimes I’ll still resist and will draw things out on a white board and just jot initials of characters to say “you’re roughly here and he’s roughly there, but nothing in this drawing is to scale so don’t worry about it too much and let’s just move on.” I still think keeping it abstract makes it easier to imagine combat as a fluid moving thing rather than a bunch of static game pieces on a board.

And then there are the times I just know ahead of time I’m going to need the squares and so I put out the battle mat before anyone sits down.  This is the case for my Bossfight for Breakfast games at TotalCon.  With just two hours of play I totally trim it down to a couple of very complex encounters.  I break out those giant set pieces and say something like “you’ve been working your way through this dungeon for many hours and finally break into the room where the evil cult is trying to summon a greater demon… go!”  In this case I’m intentionally making a single encounter as complex as I possibly can to just give a little taste of a high action D&D game without the slower exploration parts.  I mean, I’ve got two hours, something has to be cut, right?

Recently I’ve taken to preparing for this using Gaming Paper.  It’s pretty nice to pre-draw out a more complicated architecture than I’d ever want to draw on the fly on a battle mat.  I’m finding that Rappan Athuk has many nice locations for this – rooms filled with crazy cliffs, bizarre platforms above bubbling lava pits, etc.  I’m hoping the players will be delighted with all the crazy detail and bring some exciting tactics to the table.

Of course, now I have to lug miniatures to the convention.  And I feel that foolish tug of “do I have exactly the right minis for every monster I’ll be fielding…”  Sigh, maybe this wasn’t such a great idea after all.  But it will help keep me organized with a big table of players and only two hours to play.  I guess this is the right time for it.  Maybe.

Like I said, it’s complicated.  See what I mean?