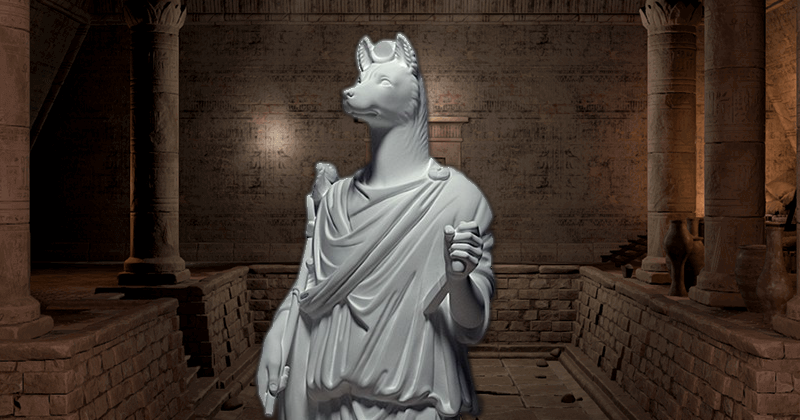 Here is the final edit of the Vile Crypt of the Reawakened Sisterhood. Despite being 36 rooms I managed to keep it down to just two pages which I’m pretty happy about. I even chucked a little extra art into it. Normally I’d keep this fairly vanilla with just the map and text, but since I knew I was going to post it for download on my site I thought I’d gussy it up for you guys.

The process for completing the content was pretty straight forward. I was particularly delighted with rooms 5-7, for which I rolled monster (ghouls), monster (ghouls), and a trap. The random generator giving me the same monster for two rooms that are already on their own vertical level immediately lead me to creating “the ghoul pits”, a nasty surprise for anyone that tries to invade the priest quarters without knowing the appropriate rituals.

Another atypical part of this was writing an intro text block, and a couple of paragraphs about the sisterhood. Normally I’d embed details of custom monsters directly in the room in which they appear, which is what I originally did here. Later I generated a couple rooms with acolytes in them, and I found I was creating a maze of references — rooms 12, 15, and 31 all referred to room 14 for the main description. Also I wanted somewhere to put the total number of acolytes, as they can appear in a couple different rooms or as wandering monsters. I like the idea of them kind of patrolling about the dungeon. So finally I yanked all that text out of the individual rooms and put it in its own section up front. Again this is not usual for dungeons I write this way, and most of them jump straight into the room key.

The wandering monster chart is a part of my standard template, and though the template has room for 20 entries I almost always trim this back to 6 or 8. In this case I took the table of 20 monsters I used to stock the dungeon and trimmed it down to 8 things I thought might make interesting encounters and made sense for something actually wandering around the crypt. The only oddity I think is the umberhulk, which we’ll have to presume is as much of an intruder intot he crypt as the PCs are.

Speaking of the table I made to stock the dungeon – it did eventually run a bit dry. Not every monster on that table made it in, but by the time I was at my last few empty rooms I was not happy with any of my monster rolls. Specifically I had a lot of trouble with rooms 29 and 30. For some reason all I could see in room 30 was a well, which doesn’t really make sense in a tomb, and once my head was there the doodles in room 29 really look like a bathroom. With a monster result in room 30 and not being happy with anything on the chart I eventually went back to the Level 6-7 wandering monster chart in my Expert book, and my first roll was perfect – a black pudding. Admittedly the idea of a black pudding living in water is stolen right out of Rappan Athuk. But I really liked the idea of a black pudding floating atop the well water and some human remains below of perhaps a failed tomb robber who left behind some treasure. Room 29 came up as empty, so after considerable effort I managed to convince myself the well was there for clean-up of ritual sacrifice preparation, and thus we get the sacrifice preparation table. I don’t think it’s my best work, but it was literally the last empty room and at that point I was just happy to complete the darn thing.

The final editing pass included creating a spreadsheet where I wrote down the XP value of all treasure and monsters, summed it, and divided by 6, to give a theoretical max XP award per-player. This assumes a party size of 6 and that they manage to kill every monster (but encounter no wandering monsters), and get every treasure. At first this pointed out that I had one room with a wildly out of scale treasure – I think I had managed to somehow have 40 pieces of jewelry worth 4,000 sp each in the mummy’s coffin, for 160,000 XP total. The next biggest haul after that was only about 25,000. Not only was this disproportinate, it also inflated the total XP for the dungeon to a much higher level than I wanted, so I trimmed that back to 35,000 – still the largest valued treasure in the dungeon. The totals gave me a max reward of 35,768 XP, which would be anough to bring a 6th level fighter to level 7, or a 7th level figher halfway to 8, which feals about right to me for this size fo dungeon.

I also noticed that I had rolled a ton of valuables and very little magic. The biggest magic item drop was the two +2 swords in the first room, which didn’t even come from a table – I put those in there intentionally. So I added a few more magic items into the mix, with a magic shield in the mummy’s coffin and a few items in the Sphinx’s nest, who originally had no treasure at all.

And with that final edit done, the Vile Crypt of the Reawakened Sisterhood was complete. I made this dungeon just for something to do over a long weekend, and now I kind of want to find an excuse to run it. Unfortunately it’s kind of big for a convention game. I’ve run The Vault of Zerduzan as a convention game which is only 22 rooms, and typically the players only make it through about half of it. Maybe I could run it as a two part game?