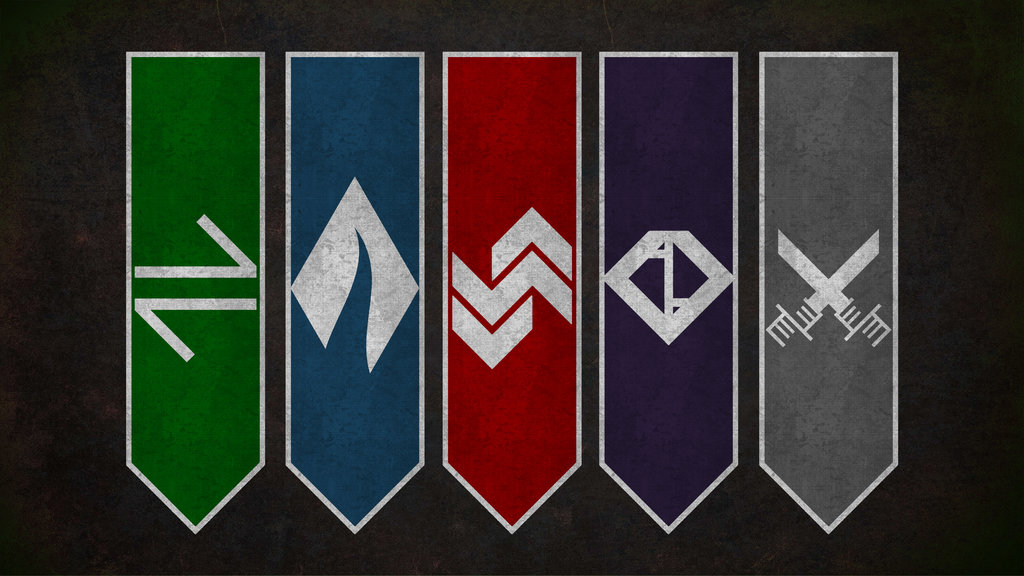 Another bit of analysis I did on Dyson’s Delve before running it was around identifying the various factions and their motives.  Like any good mega-dungeon, the Delve is full of various factions with alliances and rivalries, though given the incredibly brief one-page-dungeon style room descriptions they are not always obvious.  I wanted to create a rumor table with some hints about the factions so the players could form goals about whom to ally themselves with and whom to target for treasure raids.

So the first thing I did was write down the types of monsters in each level.  Then I put this into a spread sheet and colored them based on what faction I suspected they might be allied with.  Here’s what I came up with: 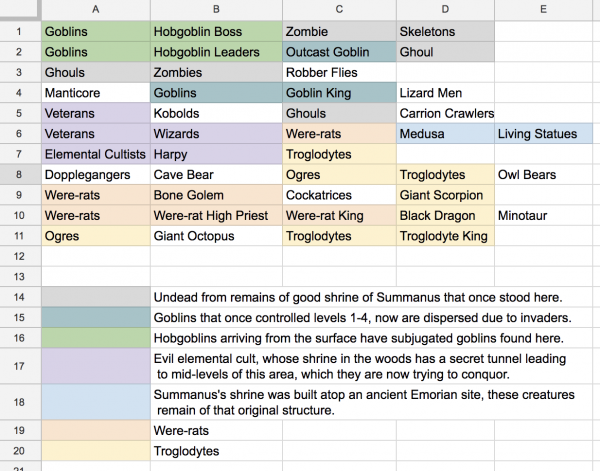 The lower level factions are easier to figure out, there’s basically the elemental cult, the were-rats, and the troglodytes.  Their relationships are hidden in the text as well, such as in level 6 room 11 where the first appearance of the were-rats states “A small group of wererats has snuck past the guards and is trying to sneak up on the treasure hunters in area 9.”  Presumably the were-rats are not very friendly with the elemental cult who are exploring this level.  Likewise the troglodytes in level 11 are described as “emissaries” and they are richly dressed and carrying a lot of wealth.  I assume this means there’s some bribery going on here – the troglodytes are either paying off or being payed off by the elemental cult.  In our game I interpreted this as the latter once the players killed off half the temple residents and then left for several days.  I figured the temple needed some protection and was willing to pay the lizard king for it.

The goblins are a bit more confusing.  In the lower levels you have the goblin king, but then there’s the weird third level and the presence of the manticore which creates something of a physical barrier between the two groups of goblins.  In the upper levels you also have some hobgoblins, though none in the lower levels, and finally the very strange room in level 2 titled “goblin outcast”.  This room is oddly outside the barricade made by the goblins in room 3 (presumably to keep the manticore out), and says simply that “a grizzled old goblin lives here alone.”

Once I had the above chart I realized there really are kind of two groups of goblins.  I interpreted this as originally being one unified group of goblins that originated in the deeper levels (level 4 where the king is), and sent some bands up to explore towards the surface.  Eventually the manticore came along and cut the upper level goblins off from their home.  Later some hobgoblins arrived from the surface and beat the upper level goblins into submission, basically turning them into slaves for their own purposes of raiding the nearby human roads, which the goblin king could no longer organize due to the presence of the manticore.

This worked pretty well for creation of my rumor chart, which has mention of the goblin raids being less numerous but more organized in recent years.  Also while the players were exploring I used another excellent chart by Jeff Rients, titled What Are the Goblins Up To?  Dungeons focused on goblins often have many rooms with a group of goblins in them, as is certainly the case here, and I like the extra bit of flavor and humor this chart adds to play.  Early on in the first level I rolled “debating the crisis of succession that would arise from the untimely demise of the current goblin king”, which is amusing given that there is a goblin king lower down.  Now none of the players actually spoke goblin, so I had the goblins actually drawing a family tree on the wall when the players showed up.  The players seemed pretty interested in this and copied it down for later translation by a sage, so I decided there was actually good evidence that the goblin king may not be the actual rightful heir.  Now I finally knew what was up with that grizzled old goblin in level 2 room 5 — clearly he’s the rightful king, stuck with the cut-off goblins, and trying to plan his return to the lower levels to reclaim his throne.  For some reason I also decided that instead of flammable oil he just had a bunch of bottles of liquor and was often drunk.

Back to the chart — the other thing I noticed while itemizing the monsters was that the troglodytes had a lot of treasure (compared to say the were-rats who have very little), and often bordered other odd monsters that didn’t appear to belong to any faction (eg. various groups of ogres).  I interpreted this to mean that the troglodyte king is a pretty crafty fellow, and willing to use his wealth to sway others or purchase extra muscle.  So you’ll see in the above charts that the ogres belong to the troglodyte faction, and in the rumors I made sure to make the “lizard king” a pretty attractive target, and hinted at his conniving ways.

Speaking of which – the rumor chart was the ultimate goal in mapping out the above factions, so I want to make sure I post that.  Before I do though, let me give you the other little bits of background that I invented back when I was running level 1 of this dungeon on its own as an intro game.  Back then I wanted to be sure the players had a solid and achievable goal in the first level, so I wrote the following intro text:

Scholars at the local abbey have recently translated an ancient text that indicates that the lost reliquary of Saint Ulther may be entombed in crypts beneath the shrine of Summanus the Immortal, god of nocturnal thunder. It is believed that shrine once stood atop a nearby hill, though if so little more than a foundation and crumbling walls is likely to remain. The forests in this area are known to be infested with goblins, making recovery of the reliquary a very dangerous task. The monks are not without resources though, and have offered a very generous reward to any who returns the reliquary to the abbey.

St. Ulther of course comes from level 1 room 8, which depicts him in a mural guiding fishermen to port during a big storm.  I added a storm god for him to hold back, and so lifted Summanus from the Ancient Romans.  Now I just needed a macguffin and somewhere to put it.  Dyson describes the small room off 10 as being sealed with wax and containing remains, so I expanded it to hold a reliquary and a good chunk of treasure thus:

10 (a). The small room to the west has a stone door sealed with wax. Inside is an ornate plinth covered with gold leaf and studded with gems. Atop the plinth rests an ornately carved oak box – the reliquary of St. Ulther. The reliquary is attached to the plinth by a thin wire. Lifting the reliquary without detaching the wire will trigger a trap firing d6 arrows from the south wall into anyone standing in the room. The gems and gold leaf can be removed from the plinth and have a total value of 5,000 sp.

OK, so with all that, I now give you the final rumor chart.  Players were given a free rumor at the start of the game, and subsequently could gain extras by spending an evening down at the tavern and making a charisma check.  They could buy +1’s to the roll at 5 silver each before rolling representing buying some rounds, and eventually the players realized the value of this and did so liberally.  Here’s the chart, with some extra comments in-line in italics:

8 thoughts on “Factions in Dyson’s Delve”