My last post has got me thinking about my own use of technology.  I mentioned a while back looking into getting the Asus T91 netbook to use at the gaming table.  I in fact did buy this machine, and have been using it for some months.  But I want to be sure it’s not just gratuitous technology, and that it actually is making my DMing better or faster.  Sure, I did pay a hefty sum for the thing, but that’s no reason I should force myself to use it if it’s not doing what I want, right?

So here’s what it looks like behind my screen now: 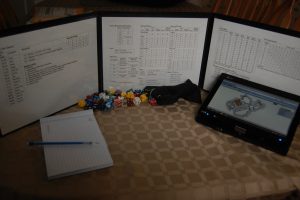 Well, certainly it’s streamlined how much crap I need behind the screen.  Originally I had planned rest it flat on the table, which would make it take roughly the same table space as that pad you see.  I had figured I would use it for the same stuff I use the pad for, given that it is a tablet.  However, I’ve found that writing on the screen isn’t quite responsive enough, making the pad of paper still better and faster at keeping quick tallies for stuff like monster HP or player XP earned.  Also, when set flat on the table the view angle isn’t very good, and it’s hard to see the screen.  So instead I keep it as you see it, slightly angled and using the landscape orientation.

Here’s what I run on it.  First, I’ve got my campaign notes up using tiddlywiki, and in fact I’ve converted some maps I use with my image map plugin (that’s what you see on screen in the picture).  I also have Adobe Reader running with my source books loaded up, as well as nbos’ Inspiration Pad for names and hirelings.

I find it’s pretty good for stuff like jumping around in the source book (hurray for PDFs with good bookmarks!) and my notes.  Also, the battery life is great, lasting well longer than the length of our usual gaming sessions.  However, adding new notes it’s not great at.  The handwriting recognition is still pretty clumsy and slow.  I could open up the netbook, which looks like this: 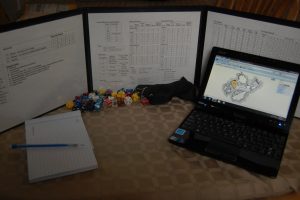 But I’m not crazy about the amount of space that takes up, and that tiny keyboard really is pretty difficult to use.  I’m thinking I might try getting a nice wireless keyboard, maybe one with a trackpad or other mouse-like device built in, and having that at hand.  It would be nice to pull over when I want to type, but then set to the side when I don’t want it.  Much easier than flipping the thing back and forth and dealing with the tiny keyboard.  That might be worth a try, before having to make the difficult decision between keeping it or switching back to the old three ring binder system. 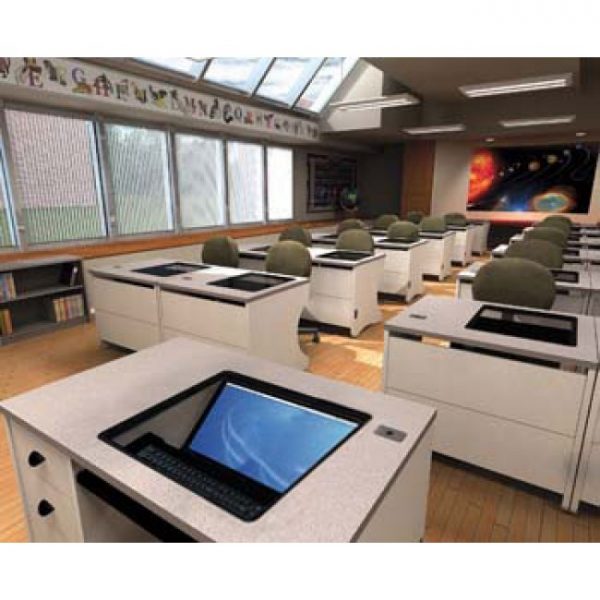 Wouldn’t that be awesome?  Computer access if you want it, but if not simply stack your stuff right on top and its as if it wasn’t there.  Anyway, that’s for someday.  For now, I need to figure out if what I’ve got is more  useful or annoying.

2 thoughts on “Technology in My Game”