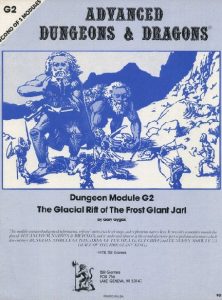 HelgaCon started with a bang for me on Friday night with Delta’s running of G2: The Glacial Rift of the Frost Giant Jarl.  Last year Delta ran G1 Steading of the Hill Giant Chief, and now it looks like he’s going onwards with the whole series, and I couldn’t be more excited.  OK, maybe I could be a little more excited — if only he were running these a little more frequently than once a year.  Still, some is better than none.

Seriously though, I love that Delta is running this series.  It’s a classic series of some very good modules, and best of all I somehow have managed to not read a single one of them.  Add in Delta’s own unique flavor of OD&D, and the whole experience really captures the mystique of D&D I felt when I was 8.  There’s something both familiar and foreign about these games, and it combines into a strange ephemeral feeling that I just can’t describe, but also makes my palm itch for a d20.

Also, I love Delta’s pre-generated characters.  We used the same ones as last year, and I got the same exact character as last year, a human fighter/wizard called Ezniak of the Myriad Rings.  My brother took the single-classed wizard, and while a level 9 vs. a level 10 wizard doesn’t seem like much of a leap, Delta really made the play between the two feel very unique via the contents of their spell books.  I don’t know if he intentionally planned it this way, but the multiclass character ended up with a lot of utility spells (read languages, fly, etc.) while the single-class wizard got the big guns (fireball, lightning bolt, etc.)  Combined with his wand of fireballs, the straight wizard really was the star wizard of the show, while my character filled a very interesting niche as not the best wizard and not the best fighter, but still a pretty awesome and powerful character in his own right.  It was a really nice balance and I really enjoyed it.

If I have one complaint about the game, it’s a minor one: Delta tried an interesting house rule of not allowing memorization of the same spell more than once.  At the time I just found it curious, but now looking back I realize I didn’t care for it very much.  What I love about wizards is their versatility, the ability to customize your powers each day based on what kind of situation you think you’re heading into.  This rule takes a little of that away, and I found myself packing a few spells I would have never taken otherwise, ones I knew would be of no use whatsoever in this module.  Mostly this is lower level spells like hold portal or sleep, useful spells to be sure when you’re low level, but when you’re level 10 taking on frost giants, they just feel like a waste.  I wouldn’t have minded an extra magic missile or two in their stead.

All in all though, a really solid game.  I got Delta to do his “big dumb chaotic creature” voice at least twice, which is a sure hallmark of a fun time.  I really can’t wait for next year.  Bring on the Fire Giants Delta.