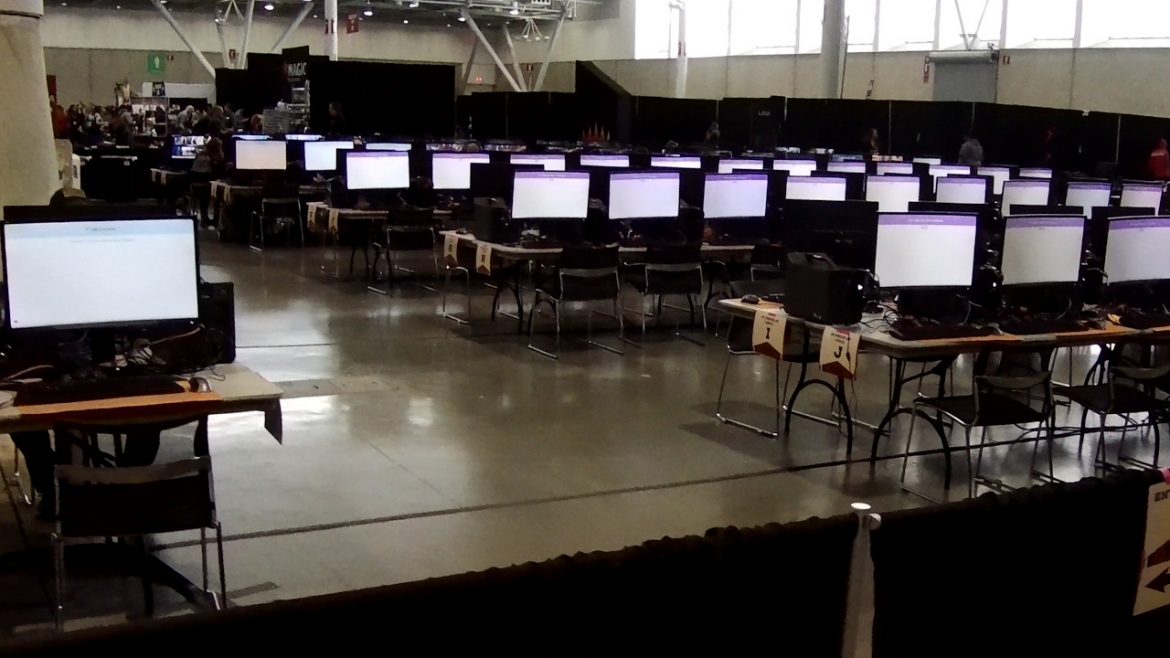 It seems like every major gaming convention is pivoting these days to do something online. From Origins Online and Gen Con Online to San Diego Comic-Con@Home, they all tout all the fun of the real thing, but without the lines and travel hassle. But is that true? Can attending an online convention be as fun as going to a real world one?

I don’t actually claim to have all the answers here, but I do have a couple experiences to share. I myself moved my little 30-person house convention online back in April, and I ran events and moderated a panel for Con of Champions over the Memorial Day weekend. I’m now in the process of seeing if I can put together some things for Gen Con Online. So how has the experience been so far?

I would say OK. Much like running individual games online, it’s really not as good as being face to face, but it is certainly better than nothing. Any convention I’ve attended has had its ups and downs, but typically at the end when I look back at the experience as a whole I’m very happy I went. For online conventions, I’d say it’s a bit closer to the line.

One very interesting thing about online conventions, which feels more organic than intentional, is the massive lowering of the barrier of entry. In addition to not having to deal with the expense and hassle of arranging travel, many online conventions have dropped the price of attending as well. Con of Champions was a fund raiser, so badges prices ranged from $2 to hundreds or even thousands, but the point was really just an excuse to donate towards keeping TableTop.Events alive. Likewise Origins Online badges are pay what you want, in order to “help support the hobby games industry during this worldwide crisis.” Gen Con Online badges are totally free, but they are charging $2 per ticketed event (a flat fee that is lower than usual for this convention), which I imagine is more about adding a financial incentive for players to show up that to try to somehow turn a profit.

And that’s the rub right there – these conventions are so easy to get into that way more people sign up than actually attend. While the discord server for Con of Champions was chock full of people leading up to the weekend, all my events were underattended. Even the ones that sold out saw half the attendees actually bother to show up for the game. Seminars and panels I think are even more difficult to drum up interest, as how exactly are these different at all from regular streaming activity?

Here we see the double-edged sword of the convenience factor. Since the convention is as easily at hand as your laptop, it’s very easy to drop in or out of activities as you like. But I’m reminded of the one time I attended Total Con without staying at the hotel. My house was less than 30 minutes from the convention at the time, so why not sleep in my own bed at night and the just pop over to the convention each day? The answer was, because it felt less like I was actually attending a convention.

There’s this interesting factor to conventions that you have all these people gathered in one place with little to do but attend events. And since they’ve put in the effort to be there, there’s a kind of “in for a penny, in for a pound” mentality that brings people to the table. Panels and seminars I think especially benefit from this. I can think of many cases of conventions I’ve been to where I found myself with an unexpected hour or two, and so I just walked into a nearby ballroom and watched what was going on. Would I do that if I was at home with a laptop, and it has to compete with all the other forms of entertainment readily at hand? It seems unlikely.

All that said, I still think it’s worth the effort to put these conventions together and try. We’re still in the early days here – we’re trying to adapt existing activities to new constraints. I have not yet seen new innovations rise to the forefront, but I think that’s just because we haven’t been trying for long enough yet. Will there be enough time for that to happen? Certainly there are many conventions chomping at the bit to get back to business as usual at physical locations. Look at Phoenix Con, which has already raised ten times its original goal and claims to be “ready to run an event as soon as the virus clears up.” But how soon can that actually be?

I suspect that crowded convention halls are going to be the very last thing to resurface. Unless some major event occurs (looking at you vaccine), I think a lot of folks will chalk conventions up as too much risk all piled up in one place. Sure, there are folks who will be willing to take the risk all too early, but I think enough people are on the other side of the fence that it will undoubtedly muffle an early resurgence. And all we need is one event that results in an outbreak to send everyone scuttling back to their computers for more online gaming.

Personally, I’ll continue to take what I can get, and also keep a careful eye out for anyone pushing the envelope. Necessity is the mother of invention, and I suspect it’s only a matter of time before someone comes up with some brilliant way to make an online convention work better than just hosting a discord server. Until then, I guess I’ll see you on discord.