In the comments to my first post about the A-series modules, Delta claimed that they represent a shift in design sensibilities from the earlier G/D series.  To which I replied:

The theory of a corporate (TSR) or cultural (convention go-ers) shift in design sensibilities is very interesting, and I wish we had more data points to prove or disprove it. The G series was originally run at Origins in 78, and the A series at GenCon 80. That’s a pretty short time frame for such a shift. Might not it also be possibly that this is just a style difference between Gygax and other module authors? Are there later works by Gygax that do not include the same naturalism as the G-series?

I decided a bit more research was in order, so I started looking for later Gygax designed modules.  I landed on S4: The Lost Caverns of Tsojcanth and WG4: The Forgotten Temple of Tharizdun, both printed in 1982.  These fit the bill very well, as the publication date is later than the A-series (82 vs. 80), and S4 was even originally designed as a tournament module for Wintercon V.  Unfortunately WinterCon V was held in 1976, so perhaps the publication date doesn’t do justice to the ‘period’ of this module, hence my also looking at WG4, which is considered a loose sequel to S4, and for which I have (so far) found no evidence of its existence prior to 1982.

While I have some PDF copies of these modules, I find it hard to read an entire module off the computer screen.  Not only do I not like reading large quantities of text off a monitor, but with modules it’s especially annoying to flip between the map and text on a digital copy.  It’s so much nicer to just have the printed book such that you can lay the map next to the text on your desk.  So I decided I had to get hard copies.

I tried e-Bay first, and found some to bid on, but alas got sniped at the end.  Next I looked at some eBay stores, which were a bit pricier, but at least I didn’t have to worry about snipers.  As long as I was looking there, I thought I might as well also try some Amazon resellers.  Interestingly I found both modules on Amazon, and slightly cheaper than on eBay.  And suprisingly, a copy of WG4 was actually available shipped from Amazon and thus covered by my Amazon Prime membership.  I don’t totally know how that works, but I’m tickled by the idea that Amazon actually has some old AD&D modules in their warehouses.  OK, I know that’s probably not true, but that’s how I like to imagine it.

My copy of S4 arrived in good time, well packed, and for some reason along with a copy of B2 and a little note saying a “free gift” had been included.  That’s a very nice sentiment and I will certainly praise the seller for it, even though I need another copy of B2 like I need another hole in the head.  As for WG4, well, take a look: 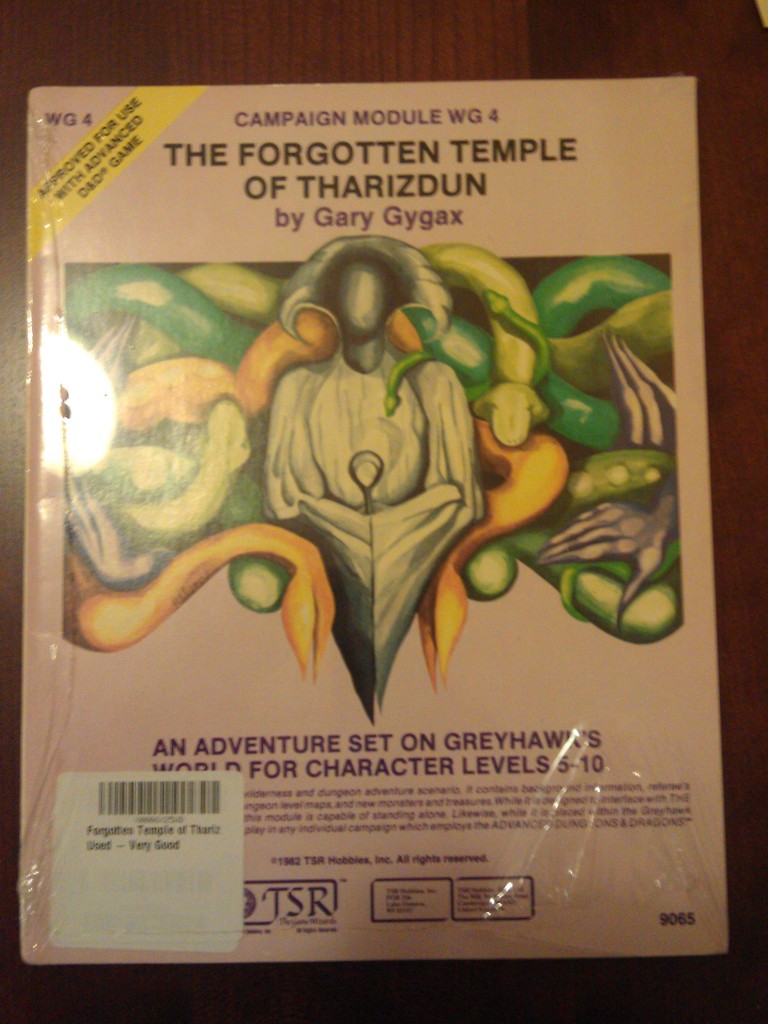 OK, I know to collectors “original shrink” is kind of big deal.  I personally hate it, as I then feel strangely guilty when I tear it off to read it.  On the other hand, keeping these things in their original shrink wrap seems just wrong, they were meant to be read and played with, not hidden away in a box wrapped in plastic in the vain hope that someday they might be worth a little extra money.

It’s such a big deal, that some people go through some strange efforts to mimic original shrink.  The funniest is the ones that are carefully wrapped in Saran-Wrap to look like original shrink from the front.  Others do a more professional job, like the one above.  Now I grant that this item was not billed as “original shrink”, so perhaps this is just an attempt at preserving the book rather than pulling a fast one on some collectors.  I certainly hope so, because they did a pretty poor job.  See that big sticker in the bottom left that says “Used – Very Good”?  That’s actually on the book itself, under the shrink wrap.  Doh!

Anyway, I found it very amusing and wanted to share a picture.  I’ll discuss the modules more closely after I’ve had a chance to read them.  And after I tear off that stupid shrink wrap and maybe pull the sticker off too if I can.

2 thoughts on “Modules from Amazon”