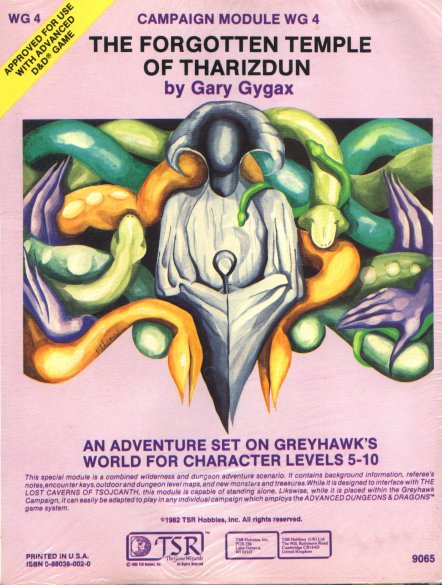 Not a tournament module, but worth looking into on my quest for just how “Gygaxian” Gygaxian Naturalism really is.  This module is ostensibly related to S4, in fact on the cover it says  it is “meant to interface with THE LOST CAVERNS OF TSOJCANTH”.  It’s hard to call this a sequel, given that the level range for this module (5-10) is actually less than that for S4 (6-10).  The module fascinatingly informs us that this is because “it assumes that there will have been some weakening of power due to adventuring.”  Really?  Why on earth would you assume that?  I can think of only one reason — because that’s what actually happened to Gary’s group in the original campaign that this module is based on.

The connecting point is a friendly settlement of gnomes in the mountains.  Like S4, WG4 includes a wilderness section that must be searched for the entrance to the dungeon.  While the players may have heard rumors of Tharizdun, they’re ostensibly out searching for some marauding creatures that now use the temple as their base and harass the friendly gnomes.  The temple itself consists of a two-tiered pyramid with dungeons beneath, and a super-secret mini-level at the bottom containing some very cool items hidden within some really nasty traps.

Delta has mentioned curiosity over what I think about this tendency towards hidden content.  In S4 the stairs to the second level are hidden under a huge pile of boulders.  In WG4, the path to the hidden treasure is behind some secret doors and layered with traps that requires some real lateral thinking to get past. Honestly, I’m totally OK with this kind of content in a campaign setting.  In a campaign the players have effectively infinite time, and presumably some clues as to the existence of some hidden treasure in these dungeons.  In the case of WG4, ultimately the players can accomplish their goal (free the gnomes from their attackers) without even finding the hidden treasure.

Heck, this exists in Skull Mountain, a module I’ve already incorporated into my own home campaign.  I found the effect really gratifying.  The players got some play from the dungeon, and took the opportunity when hitting the road block to go back and rest and then even move on to explore other parts of the world.  Always in the back of their heads though was the idea that some day they’d like to go back and figure out how to find what they missed.  This is great from a DM’s perspective.  Re-use of material can be a fun exercise.  I have tons of ideas of what’s now in the upper levels of Skull Mountain since the players left.

That said, I don’t think hidden content is as good an idea in a convention setting.  In this case the players have extremely limited time, and I’d hate to waste that watching them bang their heads against an impasse.  I think in a campaign game you really have to stick to Rient’s tennent of “keep the main thing the main thing”.  Hidden content is fine if its a bonus, but not great if the players feel like they ‘lost’ because they didn’t find it.

I think campaign content is where Gygax really excelled.  Every thing he’s written looks to me like it would play well in a campaing, and most of it would be easy to adapt into any existing campaign.  As for convention content, well, I think the A-series style is just a bit more conducive to that style of play.  I could imagine running the A-series at a con, I could not imagine running S4 nor WG4 in the same setting.

As for WG4 specifically, I really love the vibe it has.  The hidden temple full of dark secrets is really present here.  The most interesting thing in this module though, I think, is Gygax’s attention to the initial assault.  There’s a lot of text here on how various forces within the temple will react to assault and what they’ll do to defend the temple.  While I think this would be awesome to play in, it’s the kind of thing I have a lot of trouble trying to get straight in my head as to how I’d run it.  I think I’d have to re-read this a couple times and take some notes to really get it all right, and then the players may not even favor a direct assault like this.  What if they sneak in under the cover of night (or silent/invisible magics)?  Don’t get me wrong, I love the concept, it just sounds to me like it would be really hard to run.

I think in the long run I could imagine incorporating S4 into my home campaign more readily than WG4.  I have no immediate plans to do either, especially given that my current players are much too low level for it, but I will keep them both in my back pocket.  I think this is where Gary had it really right — for a home campaign, too much content is far better than not enough.

1 thought on “Module Review – WG4: The Forgotten Temple of Tharizdun”