Over a year ago I used Delta’s Book of War to resolve a major battle taking place in my campaign: the Battle of Restenford.  Next weekend I’ll be doing it again, and for this one the author himself is coming up to help me run it.  Expect to see more details on that in the future.  I invited some of the players to come and control the defense, which they’re excited to do, but a bit nervous about facing off against the creator of the game.  Some practice games were proposed, and so this afternoon I had two guest over for a little Book of War action.

Two players showed up, and for the first game I had them play just using the basic rules, 200 points a piece, just to get a feel for the rules.  We actually made a fair number of mistakes along the way, and I took pretty poor pictures of it, so we’ll just skip the review of that game.  The major point of interest was that it ended with one player down to just one unit of three horse archers, while the other had two units of cavalry, one medium and one heavy.  It was turning into a very slow game of cat and mouse, and so the horse archer player decided to just concede.  I think with two units the other guy probably could have eventually cornered those darned horse archers, though it would have taken quite a few turns.

For our second game we added in all the rules, and played a bigger game of 1 vs 2.  I had 500 points and my two opponents had 250 points each.  We wanted to play with wizards, and after cruising through the rules I decided it would be amusing to do a little law vs. chaos theme.  Here’s the board after initial setup, and the opponent has started moving some units:

My forces in the fore-ground from left to right include: 4 hill giants, 10 goblin archers (cleverly disguised as skeletons), 9 medium orc infantry with an embedded rank-2 wizard, 10 more orc medium infantry, and finally 10 more goblin archers (again disguised as skeletons).  For my spell I took Control Weather in hopes of avoiding bright sun penalties on all the green skins, but the weather roll came up cloudy anyway.  Still, worth the extra points I thought to ensure dark skies.

My opponents’ forces from left to right include: 3 horse archers, 3 light cavalry, 3 heavy cavalry, another 3 heavy cavalry, 8 pikemen, 5 archers, a wizard with 3 heavy infantry entourage, 5 more archers, 3 medium cavalry, and finally 3 more medium cavalry.  Yeah, that’s a lot of little units, which I’m not sure was an intentional strategy, but it did work in their favor as we will see.  The terrain includes a section of rough in the middle surrounded by lots of hills.  Amusingly most of those terrain placements are my own, as my opponents kept rolling “open”.   They seemed disappointed by not getting to place terrain, but for an army with so many cavalry I think they should be pretty pleased.

Here now is the board after the end of my first round: 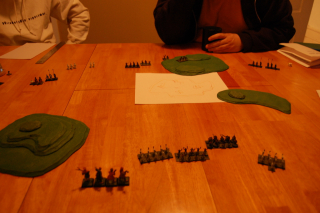 I’ve moved all my green skins forward slightly in a defensive posture around the wizard and to try and get into better range weapon firing position, though the right flank opponents remain well out of range.  On the far left some lucky rock throwing has killed one horse archer and routed the unit, which will vanish off the board next round.  Excellent result considering the -2 to their rolls due to range and indirect fire over the hills.  One of the heavy cavalry units has also lost a model from my wizard’s fireball wand, though no route there. 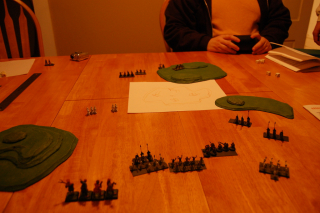 Above is the end of my opponents’ round 2.  The enemy horse archers are nearly off the board.  On the right the medium cavalry have pushed forward but were slowed a bit by the intervening hills.  My right-most unit of orc infantry have taken some losses from archer fire, but hold the line.  The light cavalry has impacted into my goblin archers on the left, but they hold as well. 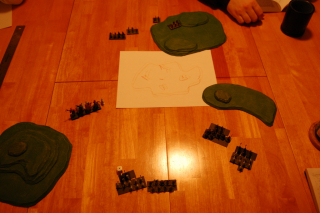 My turn 2, and I rush the enemy.  Perhaps it would have been wiser to hold back and keep firing missile weapons.  My hope though was to get one hit in with my giants.  Sure they need 6’s against the heavy cavalry, but with damage 2 hits just one hit will take out a model, and with only 3 models in the unit I’m hoping for a quick route.  In fact, the dice are just not with me here, as I only take out one cavalry model on both fights on the right flank, and no routes there either.  My goblins show their mettle taking down one of the light cavalry models and wounding another, and a lucky shot of the fireball wand takes out another heavy cavalry model.  One remains, but he just refuses to run. 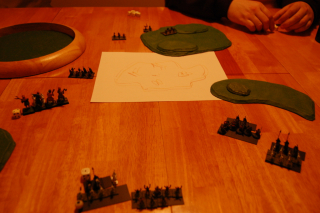 Now the fight is starting to turn.  On the right flank I’m just not getting the hits I need, and my green skins are starting to whither.  My wizard’s orcish guards have taken some losses from archers, but fortunately have not run.  The solo heavy cavalry model has joined the light cavalry in wiping out my goblin archers on the left, and they route.  My giants start taking a couple hits, though with 8 HD a piece, I’m not worried yet. 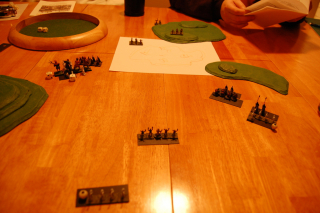 My giants are now seriously under fire.  There’s a full unit of 3 heavy cavalry in front, and 2 light and 1 heavy in the back.  That’s 12 attacks!  Not to mention the pikemen have joined in with some 1″ distant jabs at my poor giants.  They’ve taken 6 wounds are look like they’ll lose a model soon.  Most distressing though is their continued inability to inflict a single wound on the enemy!  My wizards’ guards continue to take losses, and the battles on the right flank are really getting bloody.  I’m losing models left and right, while my own attacks just never seem to land. 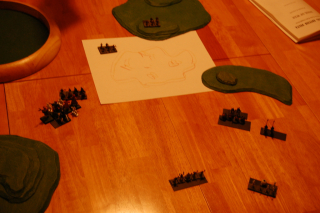 This is the last turn we play, which is mine.  My opponents unfortunately have to leave soon, and before I throw in the towel I want my last licks.  Despite this, and despite shifting focus to attack the easier targets of light cavalry, the giants continue to roll terribly and miss every attack.  My goblins on the right finally break, and my orcs are down to just 4 figures and keep missing their targets.  The right flank was a pretty well balanced battle, but the dice just don’t love me in this game, and it looks like I’m going down.  My wizard does land a fireball on some of the enemy wizard’s heavy infantry guards, but it’s too little to do any real harm.

It’s too bad we didn’t get to finish out the fight, and I think my opponents’ are the pretty clear winners here.  It was a lot of fun though, and definitely served the purpose of getting us all comfortable with the rules.  I came away with a list of questions for Delta, which I’d normally just email, but as Book of War is an officially published product perhaps it serves us all better to post them publicly here.  I’m sure Delta won’t mind, right?

Wow, OK, that was longer than I anticipated.  Delta, if you don’t want to answer these here, I’ll be happy to move this to a more private venue.

6 thoughts on “Book of War”