Before I let it slip too far into distant memory, I want to follow up with a quick report on the games I played on Saturday at HelgaCon.  I’ve already covered my Friday night and Sunday morning earlier, so this should cover everything.

After getting up too early in the morning and eating a spectacular breakfast (thanks Brian and Paul!), I sat myself down to play in BigFella’s Thousand Year Sandglass game.  It’s basically a sand-box world with an Arabian twist, using Labyrinth Lord at it’s core but all the demi-humans have been replaced with very cool and thematic custom classes.  That said, Delta and I created a pair of ne’er-do-well human fighters that we’ve played for three years running now and I really look forward to playing every year.  The Jarib brothers were back for another go at riches beyond comprehension, and with some success this year.

BigFella always goes above and beyond with the minis for this one, as you can see here where we’re fighting a huge lizard chained under the sand of a corridor in a musty old tomb.  As you can tell from the description, BigFella is also very good and pushing interesting settings for the fights that are chock full of that Arabian Nights vibe.

OK, I’ve realized I have nothing really informative to say here about this game other than how freaking fun it was.  This year Delta was a bit of a stickler at the end in claiming some of the nicer treasures for himself and me, which made a lot of sense given that we’re the ones coming back every year while many other characters don’t make the repeat visit.  Still, I always feel a slight remorse that perhaps he and I stomp all over other players in this game.  Well, maybe we do, but screw it, with all the DMing we do at this event we deserve a romp through the desert! 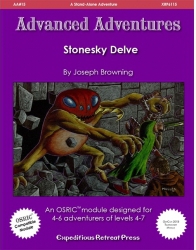 In the afternoon I ran a session of Stonesky Delve, an Expeditious Retreat module run as a tournament back at GenCon 2010, which I happened to play in.  It’s a really great module, though a bit nasty on anyone volunteering to be the mapper.  The premise, of the first part at least, is to be more realistic in terms of spelunking, including a lot of 3D terrain.

Personally I think the second half of this module falls a little flat, but that first half is really fun.  I definitely recommend it, especially if you want to put your mapper through the wringer. 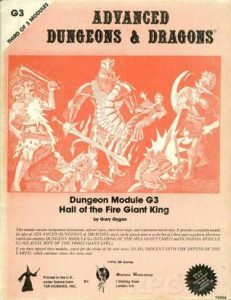 By evening it was time for the third installment of Delta’s run of the original G series modules.  For some odd reason, this year we only had 6 players.  In the past I’m pretty sure he’s gotten a full 8.  I picked the same character as I always have as did my brother Max.  That dope, his character’s biggest asset last year was his wand of fireballs — what use is that against Fire Giants?

We got it pretty rough in this one.  We tried our hardest to be sneaky coming in, but missed the hiding guard, and it was straight into the meat grinder from there.  At some point we managed to retreat (having lost one player), collect ourselves, and then come back the next day.  It was even worse on the second day, and ended with a TPK.

To be honest, I enjoyed G2 much more than G3.  Perhaps that was our fault for missing the hiding guard.  Perhaps we were at a disadvantage with only six players.  Had I realized at the start how good fire giant saves were, I might have lobbied at the start for an all fighter party (something I brought up at the end).  It was fun, sure, but I think it probably plays better in a campaign where a party can take more down-time to contemplate the problem and think of better ways to crack it.  As a convention game where players are inclined to be a bit more headstrong, I think it’s not at its best.

Now that we’ve completed the trilogy, it’s my hope to pick up some copies of these modules at next GenCon.  If I can’t find them at the GenCon auction, I may very well resort to ebay.  Either way, I expect to be reading these in the future, and may have more to say at that point.

So there you have it, HelgaCon as I remember it, which may be somewhat blurred or distorted given how sleep deprived I was the entire time.  Can’t wait for next year.