OK, time for some analysis of Rappan Athuk. As before, this will contain all manner of spoilers, so if you intend to play this module and want to be surprised, turn back! 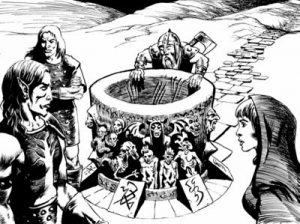 Overall, I’d say my impression of Rappan Athuk is very mixed. I know it has a long history and must therefore be beloved by many, but I think overall Stonehell is still my favorite megadungeon, and I don’t think Rappan Athuk holds a candle to other stuff Dan has run for us, such as the G-series of modules.

Finally, I’d like to discuss the issue of the rope climbing. At the time, I gave Dan a lot of crap about the two character deaths in the well. I found it very frustrating to go through what felt like such a well executed withdrawal from the dungeon just to have two characters die from what felt like very arbitrary dice rolls. That said, I found a lot of humor and enjoyment when despite our intricate plans Joey still managed to roll double 1’s and die climbing down the cliff. There’s clearly something off here around expectations and actual results. When they’re off by a small margin it’s extremely frustrating and when they’re off by a giant gulf that’s comedy?

In retrospect I suspect what Dan is doing here is simply trying to be sure he doesn’t devalue the thief climbing skill by letting any wimpy wizard do it without even rolling dice, and I find that laudible. Also I think there was a strong element at play of mounting frustration from the “secret front doors” and “illusion fo choice” items mentioned above, and the climbing realted deaths managed to fit in just as this sentiment was mounting. And finally, I think there was a big problem of my preconceived notion that climbing up and down ropes should be trivial based on years of prior roleplay. I liken this to Dan’s take on non-exploding lantern oil. It’s a totally reasonable interpretation, but when presented to an experienced gamer with years of built up expectations he will find it very frustrating if he’s not given time to digest it first.

So my advice to Dan (whom I’m sure is reading) is this: don’t change your climbing stuff at all. Do make sure though that when climbing is first approached that you’re vocal about the potential outcome and chance of success, and emphasize that this may be different from prior experiences at the gaming table. Also, fix that freaking hidden front door to the dungeon.

All in all, I’d say I give Rappan Athuk a B-. There’s definitely some cool stuff there, but I wouldn’t run it as written. I think it needs some key edits to be really playable, but I also think a good DM could easily make those edits and end up with a really fun game.

2 thoughts on “Back to the Well Once Too Often”