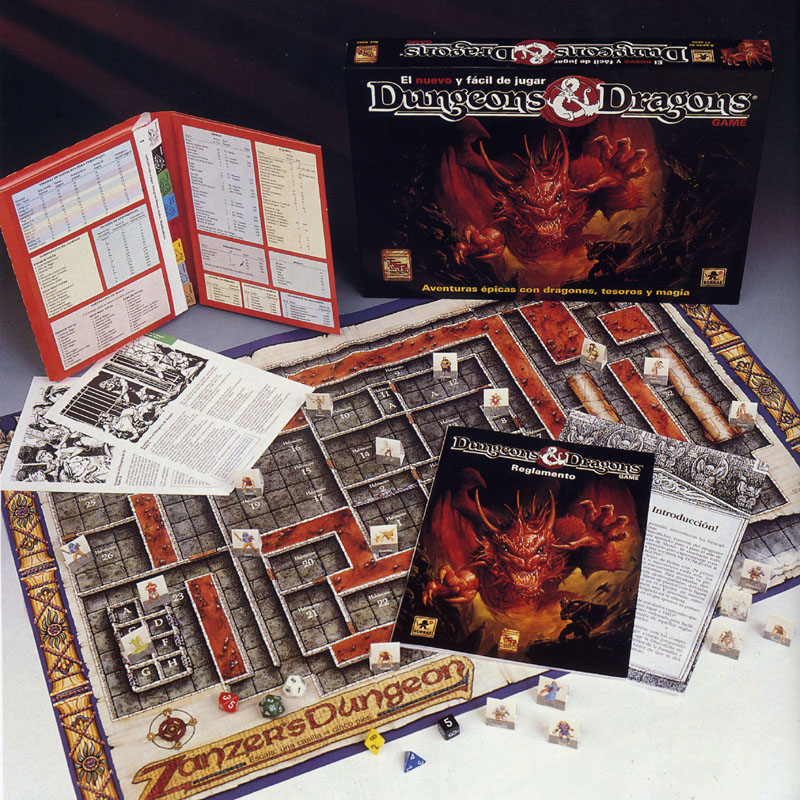 Travis has reminded me that I meant to put something in my last post about the 1991 basic edition of D&D, labeled “The New Easy to Master Dungeons & Dragons Game” seen here:

This edition of the game came in a very large rectangular box, similar to board games of the time.  Unfortunately the board was flimsy poster paper, but it was still pretty neat.  It also included a ton of card-stock tent figures for both players and monsters.  Strangest of all was the format of the book.  The red sort of folder-ish thing doubled as both a DM screen (there’s a third panel that folds out, which is hard to see in this picture) and the rule book.  The left-most section was a large pocket that contained the rulebook printed on heavy cardstock with color-coded tabs for each chapter.

If I recall correctly, I think the adventure was incorporated into the cards.  The adventure was your basic prison break, but the funny twist was that the whole point was to introduce you to rules one at a time.  The characters start with literally nothing, maybe a name.  In the first scene they introduce stats, so everyone rolls stats.  Later comes combat.  As rules are introduced you fill out more and more of the character sheet.  While it struck me as odd that you didn’t know if you were a human or dwarf until several rooms in, and there was a point where suddenly you realized you knew magic, it still seemed pretty clever to me.

I bought this when it came out, I must have been 13 or 14.  At that time I would have bought anything that was labeled Dungeons & Dragons, and the big full color art on the back showing the cool map and character tents was definitely a selling point.  Now at that time I maybe had one or two friends who played, and they already knew the game, so an intro game was kind of pointless, and I never really played it.

I’m pretty sure I have a copy of this hidden away in my closet now, likely purchased on eBay some years ago in a nostalgic attempt to reacquire every mis-treated game I owned as a child.  I’ll have to go dig it up and see if there’s anything worth mining out of it.  If nothing else, I kind of dig the idea of using a prison break to start with very stream-lined characters.  No equipment, no spells, just a stat block and we’re off.  Things like equipping the characters can then become part of the game as the party breaks into the armory.

Anyone own and use this game and actually use it to introduce new players to D&D?

2 thoughts on “The Big Black Box”