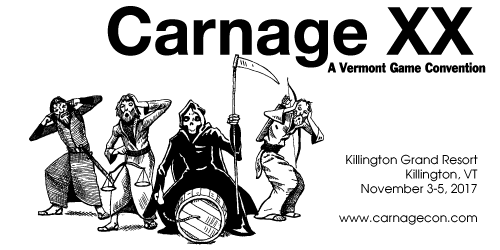 I’m back from Carnage on the Mountain, a great little convention in a truly beautiful location at the top of a Vermont mountain.  As always it was a lot of fun, and today I’m congratulating myself on my standard practice of always taking the Monday after a convention off from work.  I heartily recommend the practice to anyone that can get away with it, it’s a great opportunity to catch up on the missed chores (and sleep) and reflect on the experience.

Carnage was a bit more seat-of-the-pants for me this year.  I signed up to run things I have run in the past so did not need a ton of prep time leading up to the convention.  Unfortunately this meant I did not pay close enough attention to deadlines, barely getting my own games registered in time as well as signing up to play in my empty slots at the last minute.  This of course led to some changes on the fly at the convention.

I signed up to run three games:

Friday Night, The Vault of Zerduzan – A one-page dungeon I’ve used in campaign play and have made modifications to as a result.  I slotted it for 4-8 players and got the minimum, but they were all on point and we had a great time.  It culminated in a show-down with a vampire that very nearly killed the party.  They got her down to 0 and she escaped in gaseous form to her coffin which was in a very difficult to reach location.  The party took the loot they had acquired and made a hasty get-away, vowing to return some day and destroy the creature.  It was very satisfying.

Saturday Afternoon, The Caves Beneath Gray Keep – Described as a low-level OED game that centered around caves inhabited by goblins, originally I had another one page dungeon in mind but I changed it at the last minute to use the adventure I’ve been using for my Intro to D&D game.  It also features goblins but offers the players a lot of choice in directions and a few different goals to pursue.  In this case I gave them three goals:

All in all it was a very fun game, with a big table of 7 players.  The characters were level 2-3 so they ran out of resources frequently (health and spells), but as they dungeon was so close to town they were able to retreat frequently, and did so.  They made at least 3 forays into the dungeon as I recall, and in their second one they decimated half the goblin population before retreating for a 2 day rest.  This really made me work at figuring out how the remaining monsters would fortify themselves, and in so doing lead to a very exciting final confrontation with two brave players pushing themselves into an obviously deadly situation and getting killed before the others retreated.  Being a con game, it’s not surprising when a few players really push to the hilt like that, and frankly it’s good fun for the whole table.

Sunday Afternoon, Outdoor Spoliation – Sadly this game failed to launch. Sunday is an awkward time at this convention as many folks leave early, and others sleep in after having been up much too late on Friday and/or Saturday.  As a concession to this the organizers created a hybrid time slot of 10-2 which I quite adore, but it’s very up in the air just how many players you will get.  In retrospect, this was not a good choice for scheduling a game like this.  Perhaps it will be better received at TotalCon in a normal time slot.  With not enough players I floated off to play in another friend’s game and still had a good time, though I’m a bit disappointed I didn’t get to run this one.

I also got to play in a few games — I kicked off the convention on Friday afternoon with a DCC game, I played in a Star Wars LARP on Saturday night which I’m sure I’ll post about later, and Sunday morning I fell into my friend’s Brass and Steel RPG which is always good fun.

I also stayed up much too late on both Friday and Saturday nights, drinking and talking with friends I don’t get to see nearly often enough.  As usual I signed up for nothing Saturday morning as there’s no way I was getting up at 8 AM.  While Sunday has a 10-2 slot Saturday does not, so unfortunately this usually leaves me with an odd 2 hour or so lull Saturday morning.  There’s a dealer’s room to explore, but it does not contain enough to entertain me for 2 hours.

So, some notes to myself for next year:

OK, those are the highlights.  I will surely have some more things to dig into in future posts.  I’ll also be spending some time today registering things to run at TotalCon, so I may have some things to say about that as well.