Continuing on my post from yesterday, let’s get into the plot of the Mazes and Monsters game.  As before, spoilers abound, so turn back now if you think you might get a chance to play this scenario sometime in the future.

The scenario breaks down into two major parts.  The players spend the first part investigating leads on campus to find out what happened to the missing kids.  Originally I had thought to set the game at my own alma mater, Connecticut College.  It’s a small campus that’s easy to walk around and I figured since I knew it well I’d be able to improvise locations as needed easily.  The first time I ran this and it became clear that the setting was a college someone said “Good old Miskatonic U.”  Of course, why didn’t I think of that?  Well, a little doctoring to my map and in subsequent runs CC was rebranded Miskatonic University:

The players can visit the various missing kids’ dorm rooms and find a good number of clues.  Most of their rooms have some D&D elements – a poster, polyhedral dice, some books, etc.  At this point it was hard to call what I was using “props”, since they were the materials I had on hand for my other games.  I also had some printed material about Dagohir, a very early LARP that existed around 1981.  The players would also discover in a few of the rooms some materials for making LARP gear – PVC pipe, cut up couch cushions, duct tape, etc.  Amusingly in one game a couple of my players were LARPers and took a real delight in pretending they also had no idea what this stuff was all about.

I also had course schedules on index cards for each student, which would be readily available to the Dean or Tracey.  The kids all had one class in common: PHY 108 – Physics in Popular Culture, taught by one Professor Dennis Masters, who happened to be a balding midget.  Yeah, he’s the DM.  He’s also missing, but a careful search of his office might uncover some creepy Cthulhu books on opening portals to other worlds.

The one clue that comes up repeatedly though is a map of a nearby amusement park, currently closed for the season, but that happens to feature a dark room “Dungeons & Dragons” ride.  Seems like the kids were planning a live action D&D game using the closed ride as their backdrop.  I drop this map in up to three places and soon enough the players are off to investigate, and once there we transition into the second part of the game. 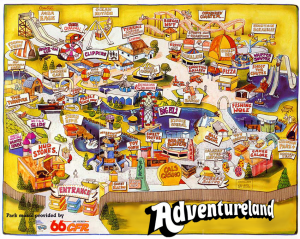 That map is an actual 1980s era map to Calaway Park, which I doctored with the logo of the park that was close to me growing up, Adventureland (the same one they made the movie about).  I also modified the ride in dead center to have a Dungeons & Dragons logo.  I figured this was going to be too much — Bobby’s voice saying “hey, look, a Dungeons  and Dragons ride!” just echoes in my head every time I see this map.  It’s right there in the center.  Surely everyone is going to know exactly where this game is going, right?

Nope, didn’t happen.  In fact, some times it wasn’t until well after the group arrived at the park and were studying the map to try and decide where to investigate did someone suddenly say “Oh, there’s a D&D ride!”  Anyway, off the players go to look, and of course once there they get sucked into “the realm”, a magic land where everything D&D is real.  Once there, it’s just a matter of killing the players off or driving them mad with frankly stuff that feels pretty normal for your average D&D game.

I broke the realm down into 5 areas roughly laid out on a cross.  In the center is a crossroads with a large sign listing the names of the 4 other areas, which is were I start the players.  Also a big cage attached to a gibbet, only it doesn’t have a cranky Madmartigan in it, instead is the corpse of Presto, a pair of scissors buried handle deep in his neck.  Time to start drawing some insanity cards!  Here are the other 4 areas, all inspired by actual D&D cartoon episodes:

If the party can make it through the Moon Forest, they can reach Venger’s castle, actually modeled after the Prison of Agony from the show.  Diana is trapped here in your classic giant metal cage, and of course Venger (and his ogre guard) are here.  The latter could be killed but the former is basically way too powerful for the players – he’s got all the kids’ weapons at this point.  I had some great moments at this location though, which surprisingly most groups did reach.  I had a wonderful moment with one group where Theo managed to get all the way to the cage and lift it up part-way so Diana could scurry out.  Then Venger swooped down and blasted a giant hole through his chest – he lived just long enough to see himself drop the cage and crush his own daughter who was halfway out. (I think I mentioned perhaps that Theo was the PC I tended to screw with the most?)

Man, I thought I was going to get all the way through this without a part 3, but I guess not.  So I guess I’ll leave it here and say stay tuned tomorrow for final reflections on this game.