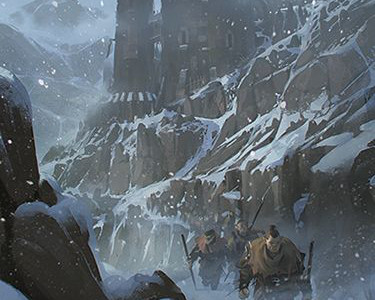 I have returned from GaryCon and have many exciting tales to tell.  To kick it off, let me relate to you of my harrowing trip to the small Prussian town of Braunstein.  For those that don’t know, Braunstein is a wargame scenario designed by David Wesley, run for his group in 1968 which included one Dave Arneson, who would later go on to co-author Dungeons & Dragons.  It is thought that this game was a strong inspiration for D&D and the progenitor of the modern roleplaying game.

But first, let us discuss the travel.  When Delta and I signed up to go to GaryCon, we agreed that we would use Thursday as a travel day, not expecting to really play any games that day.  Looking through flights I got myself on the 2:00 PM flight out of Boston, to arrive in Milwaukee at 3:40 PM thanks to the timezone shift.  I figured I would put in a few hours of work in the morning, then drive to the nearby bus station to leave my car in long term parking and take the express bus in to Logan airport.  After landing I intended to pick up my rental car and drive down to Lake Geneva with plenty of time to check in, get my badge, and be ready to get up early for an 8 AM Friday game.  Delta’s flight came in much later, so he’d be on his own for getting down to Lake Geneva.

Well, then Delta discovered that David Wesley himself was running a game of Braunstein Thursday night at 6 PM.  Too late for his arrival time, but even having to drive an hour I should be onsite by 5 PM, plenty of time to grab my badge and get into this game, right?  It seemed plausible, so I signed up.

And then on Wednesday night, the storm came.  The reports said the snow would clear by Thursday morning, so I congratulated myself on not trying to leave Wednesday.  I might work from home Thursday morning instead of going into the office, and I’d still have plenty of time to drive down to the express bus.  But the snow was heavy and wet, and I spent much of the morning clearing it instead of working.  I could hear the branches cracking and falling up and down the street as I was out there shoveling.  Maybe I’d better leave a little earlier than originally intended, I thought.

I got in my car at 10:30 AM — more than enough time in normal conditions.  I started driving, and soon hit a road closure.  I re-routed, and hit another road closure.  I tried another direction, and discovered more fallen trees blocking my path.  I soon realized there was no way I was going to make it to the bus station.  Change of plans: I would drive in the opposite direction to try and get to a major highway, then take that directly to the airport and leave my car there.  It’s a bit more expensive, but I was running out of options, and patience – it’s a good thing nobody was in the car with me to hear the stream of swears and curses as I kept turning my car around.

Despite having to drive in the wrong direction for several miles, the plan worked and soon I was on the highway.  Thanks to my earlier than expected start I still made it to the airport around noon, and had an hour and a half before the plane boarded.  Phew.  I slowly made my way through security and had my bag manually inspected — I can only imagine what they thought my dice bag might actually contain when it went through the x-ray.  The flight was not delayed, and at last I boarded.  I made it!

Hmm, I thought, this plane sure is driving around a lot.  Will we take off eventually?  Twenty minutes of that and now we’re back at the gate.  Uh-oh.  The captain comes on to tell us that the snow had picked back up just as we were about to take off, and we were ordered back to de-ice.  Sigh.  So we wait for the de-icing machine.  Then the captain tells us we’ve burned too much fuel and must refuel as well.  For crying out loud!  Finally, after an hour of sitting in the plane, we took off.  Would I make it to that 6 PM game…?

The pilot gained us a little time, and we landed at 4:30 local time.  I might make it… and then there’s a slow moving line at the car rental counter.  I endure, I get my paperwork done… and there’s a slow line at the booth to pick up my key.  I get the car, GPS says I’ll be there by 5:40, I might make it… and there’s traffic.  Finally I get through and the speed limit is a generous 70 MPH — we don’t see that up in Massachusetts.  I wonder how far I can push it?

I’d rather not say how fast I actually drove, but I did in fact manage to pull up to the hotel with 12 minutes to spare.  I grabbed my key, I dropped my luggage in the room, and I raced to pre-reg and for once there’s no line!  I grabbed my badge and tickets, I literally ran up the stairs to the room, and when I looked at my phone as I approached the table it was exactly 6 PM!

I can only imagine what a mess I must have looked to the other players.  I was expecting to have time to settle in, maybe find some dinner, but instead I raced like an idiot to make it to the game.  Thank goodness for the presence of table service at the convention or I would have gone hungry that night.

It is a bit surreal to be in a crazed rush for almost six hours straight to finally sit down and try to calmly play a roleplaying game.  But I did it, I pulled it off, and the result was really fascinating.  The game itself ran kind of like what I expect of a modern convention-style LARP.  Each player was given several pages of background including secret information and specific objectives.  Then we were left to interact with each other, and pull in the ref when arbitration was needed.

There was a lot going on — rivalries, spies, romance.  I played a student who was devoutly loyal to the King of Prussia (Long Live the King!  Hoch! Hoch! Hoch!) and tried my best to insert myself into plots and pin blame on the French sympathizers.  It was a fascinating game, and not really what I expected.  I’d heard tales (confirmed now by David Wesley himself) of how originally he had the table set for a standard miniatures war game, but that the players got so into the roleplay they never got around to using it.  The same held for us — we had a map on the table but it never came into play.

Unusually we wrapped up our game a bit early — Mr. Wesley was prepared to run until midnight and yet we ended just after 10.  Honestly I was a bit grateful for that, I got a shower in and managed to relax a little before Delta showed up, and even after catching up for a while we made it to bed in reasonable time to get up for our 8 AM game the next morning.

Overall I’d say the game was enjoyable, but just not what I was expecting.  I had imagined there might be more odd blend of traditional wargaming in there.  Something to do with the miniatures or the map maybe.  I think even Diplomacy has more map use in it than this did — not that I’ve ever actually played that particular game, but I’ve heard it likely had influence in the development of Braunstein.

Getting to listen to and eventually just chat with David Wesley was amazing though.  He was very candid on what it was like gaming back then, and his thoughts on what has come since.  This sentiment echoes throughout GaryCon as I met one after another of the old guard, each one of whom was thoroughly pleasant, down to earth, and very willing to reminisce or answer questions.

2 thoughts on “GaryCon – My Harrowing Trip to Braunstein”