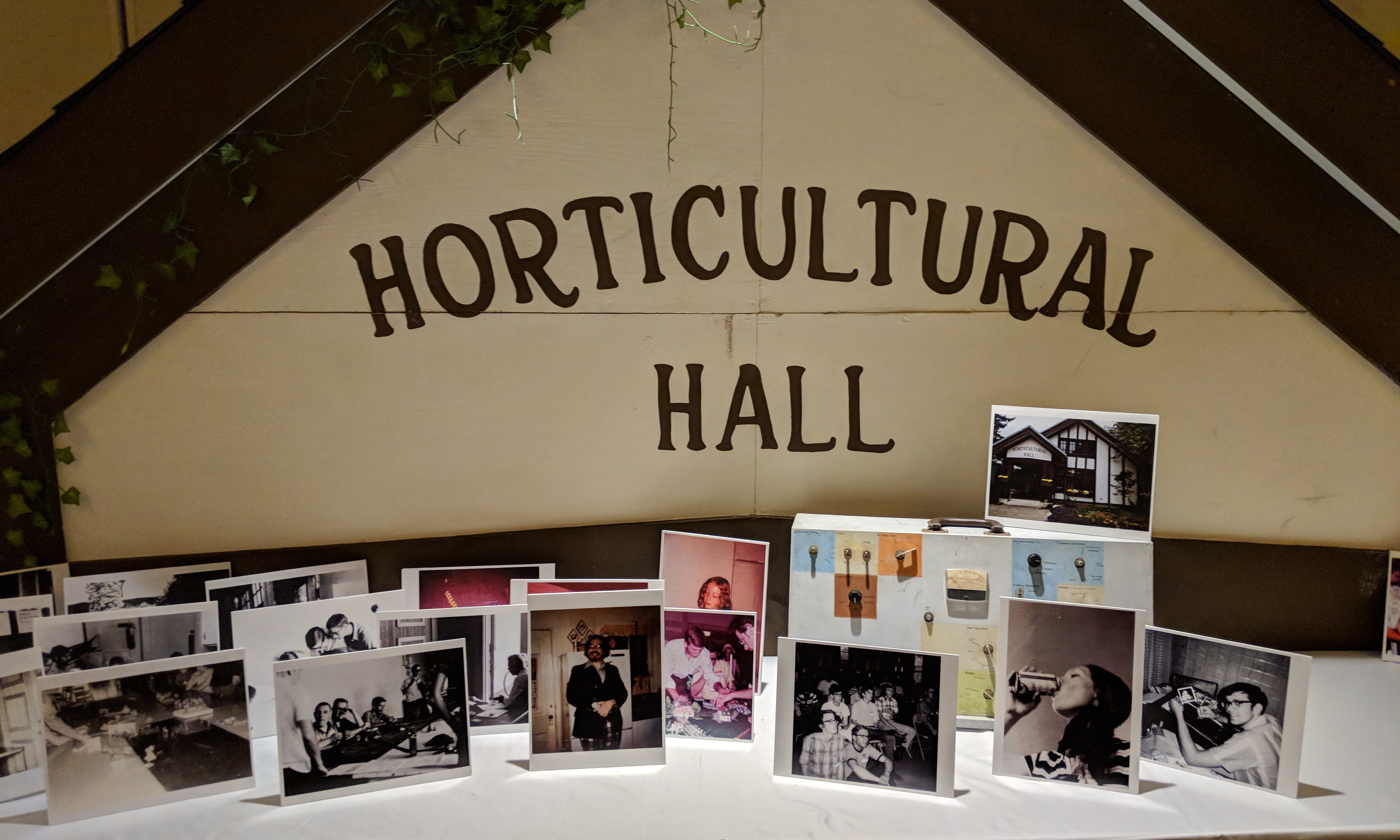 My Friday at GaryCon at the outset was not pointed at success. I had two games scheduled, both from 8-12, one AM and one PM.  I had a game from 1-5 PM as well, which was cancelled just days before the trip.  Ticket sales were already closed so I was just going to have to find something to do on the fly.  Fortunately, as I mentioned before the problem with planning GaryCon was that there were too many cool things I wanted to do, and as it turns out, dropping into things on the fly was not that difficult.  Ultimately this day was a crescendo of awesome, with each hour revealing more cool and exciting stuff until I collapsed into bed 18 hours later exhausted and thoroughly satisfied.

To start the day I had the GaryCon Open, a 1st Edition tournament AD&D game with my good pal Dan.  The game was decent, but I forgot my hard-learned lessons of participating in organized play from the 90s.  You see, these games have a huge pool of players, and a smaller one of DMs.  They start off by looking for full groups of friends to send off with a DM, then they start taking the largest group they can find, pull in an extra person or two to fill it out, and repeat.  When I played a lot of RPGA living campaign games organized this way in the early 90’s I learned the winning move was to actively look for others to form up a full group before the organizers even showed up.  Not only did this get you to the table faster, but the process itself proved to you who was going to be good party members.  The folks who were excited to participate in pre-forming groups were generally energetic, collaborative, and well organized — just what you need for a successful D&D group.

The pool for the Open had 17 players and 3 DMS, so they decided to do two tables of 6 and one of 5.  The biggest group was a boisterous group of 4 friends.  Had I remembered my lessons of old, I would have immediately tried to glom onto their group — “hey, we’re two, let’s form up and go!”  But instead I waited for the organizers, who grabbed two solos and sent them off.  Then they formed the next group in the same way, and finally Dan and I were left with the 3 others who remained.  I don’t mean to imply here that anyone in our group was not a good player, but simply that we were the ones more likely to be wallflowers, to not put ourselves out there and get the game going, and that’s not the best group to be in.  Also, we got the 3rd DM, which I suspect is likely to be the least prepared.  And certainly I got the impression from him that he had probably not read the adventure more than once before we started playing.

The game was OK, but definitely not the best thing I played at the convention.  And like those old games of the 90’s, it was a bit linear and not terribly challenging.  Alas, that cold-sweat inducing, action filled tournament of the 70’s was not being recreated for me here.  But at least I got to play with my pal Dan.  We traded info with our fellow players in case we got into the later round, but I wasn’t holding my breath – and sure enough we did not make it.  Dan later asked me to letter grade the game, and I gave it a B.

For the afternoon I got in touch with an old friend who was organizing a bunch of Cthulhu games with some friends in an odd far-away corner of the convention.  Without anything else to do I ran over there to see if I could fall into a game, and indeed I did (though not his game, another guy’s who he plays with).  I played a satisfying Cthulhu game with some good players and GM, and had the honor of being voted best roleplayer and thus got some cool swag to boot.  I don’t want to give away any of the plot, so you’ll forgive me for being a bit vague.  It was a solid game with some solid players, though we didn’t do very well at actually figuring out the plot.  I didn’t go insane, and only died at the end along with everyone else via DM fiat, so I gave it a B+.

The funny thing is, my friend’s group was running games from 12-4 and 4-8, so if I cared to I could have turned my day into a solid block of never-ending gaming, but I decided I’d rather have some kind of breather in there, and opted to leave the later time open so maybe I could grab some dinner with Dan.

Speaking of which, once my Cthulhu was up I figured I should go find Dan.  I found the room he was in, the so called “Legends of Gaming” room where the real grognards were running lots of old wargames.  He was there, busy until 6, so I cast about for something to keep me busy when I noticed this nice jousting setup. 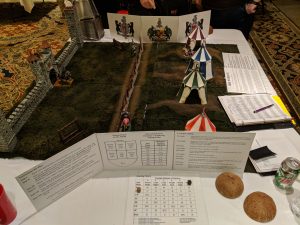 The fellow at the table asks me if I care to joust.  Of course I do!  So I sat myself down and spent the next 15 minutes enjoying a fun little game of jousting.  It’s basically the jousting rules from Chainmail, which Dan has used in his Outdoor Spoliation game, so I knew them somewhat.  We did three passes and he recorded our scores.  Apparently the thing was a tournament with later brackets and ultimately a final show down with the black knight, played by none other than Earnie Gygax.

The models and terrain were great, but really only there for visual effect.  We picked our attack and defense targets, and compared them to the opponent’s on a chart for the result, in a somewhat more complex form of rock, paper, scissors.  Now amusingly for each pass we were instructed to pick up our coconuts (seen in the picture above) and create a racket as we charged at each other.  I enjoyed this whole-heartedly, but I understand it wasn’t widely appreciated by everyone else in the room trying to play other games.

My results were quite miserable I’m afraid to say.  Dan came up to chat with the fellow running the thing while on a short break from his own game, and would later play a round himself, but I’ll save that for another post as this is already quite long and there’s a whole interesting story around Dan’s jousting.  I told you I had a lot of GaryCon stories to tell, didn’t I?  I haven’t even gotten through the first full day!

I spent a little more time poking around that room and looking at the displays.  The header shows a nice display about the first GenCons held at Horticultural Hall with lots of photos from those auspicious gatherings.  Also on display this fine Elastolin castle, which I believe also harkens back to an event at one of those early GenCons. 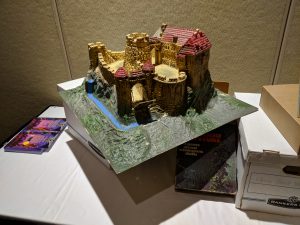 Finally, when Dan’s game was finished we popped out for some dinner before our 8 PM game – Mythrus Tower.  This was a last-minute add when GaryCon decided to open up a second featured game to all sliver badge holders.  It was on our original list but lost to my Braunstein game and a Drow Diplomacy game Dan was keen to check out.  When the organizers gifted us all with a second featured game slot, Dan and I dropped our Friday night games to join together for this Swords and Wizardry game run by Bill Webb.

I had forgotten just who Bill Webb was, and Dan reminded me at dinner that he is the author of Rappan Athuk.  We then traded some Rappan Athuk stories – I was excited to tell Dan about how my players finally decided to go down the well.  I thought they’d do better than when Dan ran it for me, as my group was painfully under powered while my current players are the equivalent of a 7th level D&D party at this point.  We had a good chuckle over the amazing ending to my adventure in Rappan Athuk back in July.

And now I’m going to demure again and save the description of our Mythrus Tower game for yet another post.  Sorry, but this is already becoming much too long, and that game deserves a lot of words.  As I said the day was a crescendo of awesome, and given the grades so far you may not be surprised that this one’s going to get an A.  I will, however, leave you with this one teaser.  Dan and I both erupted into amazed laughter when Bill began the game thus:

So you found this old well with deep claw marks leading up the interior as if something clawed its way out, and decide, what the heck, let’s go down it.