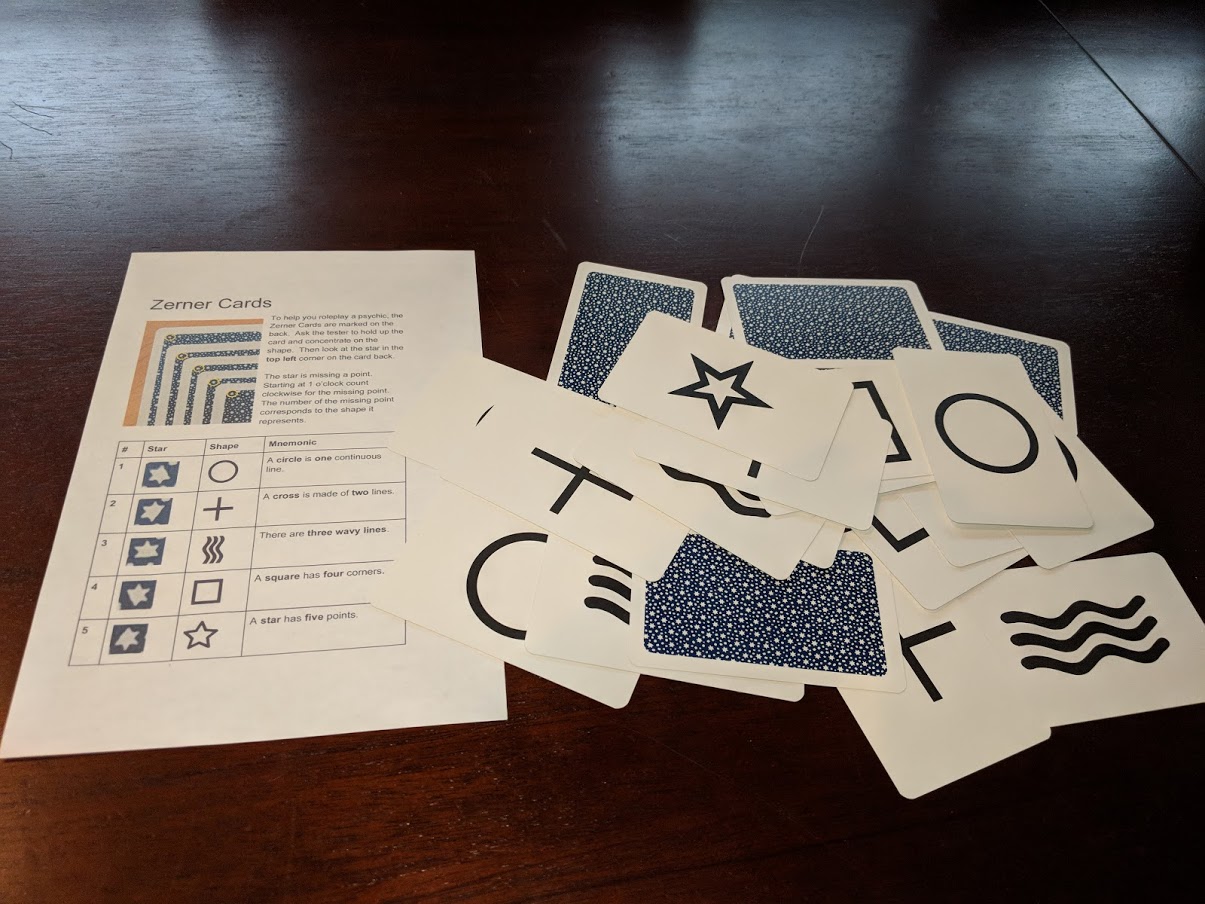 As before, please be aware that this post contains many, many SPOILERS on my Checkpoint Zulu horror game.  If there’s any chance you might get to play it in the future and don’t want the surprises ruined, turn back now!

Over time I’ve collected a ton of props for this game.  Even when I edit out parts of the game I haven’t had the heart to eliminate the props, just in case something comes up during play that allows me to reuse one.  For example, I have a tourist map of Berlin from the 80’s, which I actually used to set several scenes in the game: 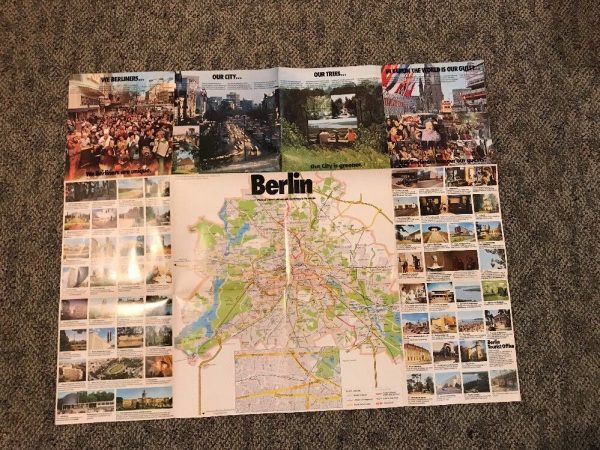 The first time I ran the game I spread this out on the table, but this encouraged the players to try and use it tactically.  They spent much more time than was necessary looking at paths through the city, when I was happy to just say “you hop on the U-bahn and arrive at the hospital”.  Worse, I think it also cemented the idea that they were supposed to find a way across the wall.  So, I cut this prop from the game very quickly.

Another cut that only came up more recently was these Zerner cards: 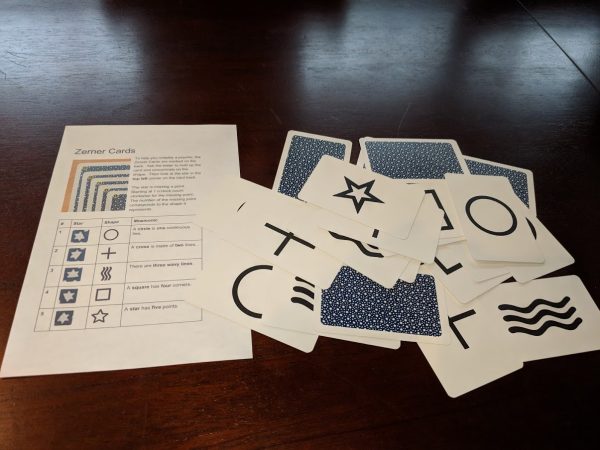 The idea was to use this in the opening scene, which takes place in Dr. Richards’ lab.  What looks from the outside like an ordinary doctor’s office is in fact a top secret lab where Dr. Richards does research into parapsychology, funded by the US Army.  He hopes to build on old research from project MK Ultra to find ways to use psychics in aid of surveillance and interrogation operations.  Detachment A oversees his project, and given that Detachment A is about to be shut down, they arrive at the lab to determine if the project should be shut down or transferred to the new unit.  Of course Dr. Richards has caught wind of this wants to do everything he can to convince them to keep funding his research.  On the other hand, the Det A guys are depressed at their unit’s deactivation and basically looking for any excuse to blow something out into one last big job.

So, the Detachment A players arrive and Dr. Richards proceeds to try and convince them that his research is legit.  He starts by using the zerner cards to illustrate his test subject’s latent ESP abilities.  Next to the cards you can see a cheat sheet I gave to the psychic players, which explains how the backs of the cards are in fact marked, so the players can roleplay being psychic.

It’s a cute bit of business, but the marks are very subtle and it’s a bit overwhelming for the psychic players.  They’ve just been given a couple pages of historic background and personal character background to read, and now I’m asking them to memorize this silly code and spot a very tiny mark on the back of some playing cards.  It was too much and every player struggled with it.  Alas, it had to go, and in the last game I brought them out only briefly and did not give the players the cheat sheet, I just quickly moved on to other things.

OK, on to the major prop, the star of the show – the phone: 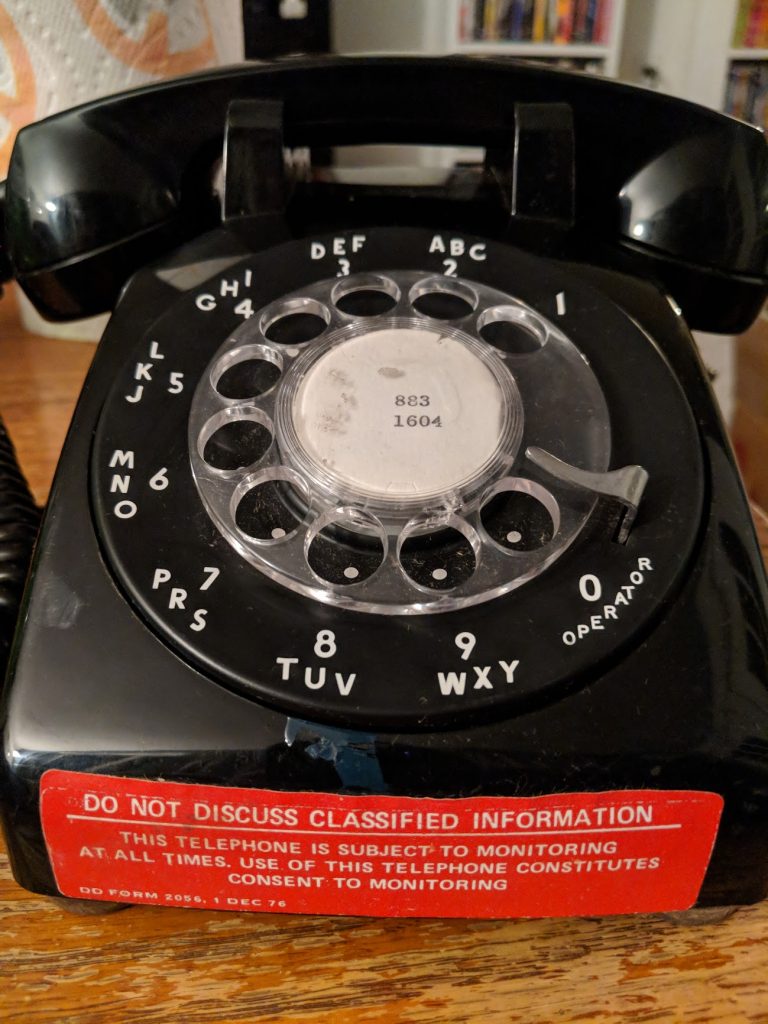 I have this phone sitting on the center of the table from the get go.  It’s a nice mood setter, especially with the sticker about all calls being monitored (total fluke, the phone came with that sticker when I bought it off of ebay — I had no idea it would be there).  The cord dangles off the table and back into my prop box, which I thought players would think is a giveaway but they generally overlooked it.  They might pick up the receiver and toy with the phone, and it appears to be dead.

So, because I have all these props for the game, I come with this big cardboard box full of stuff from which I’m constantly pulling out stuff.  As I mentioned, the phone cord dangles into that box.  If anyone looked closely, they’d also see that I cut a small hole in the back of the box, from which protrudes a power cord which I plug into the wall.  But I keep that shunted back near the wall next to me and nobody ever notices it.  Besides props, here’s what’s in the box: 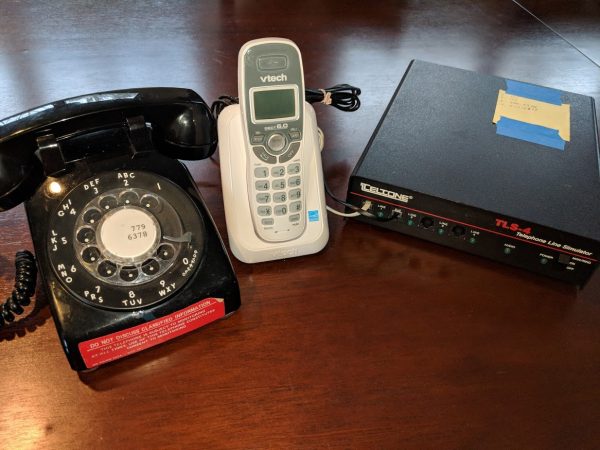 The machine on the right is a “telephone line simulator”.  Basically it allows me to plug in a couple phones and assign them numbers and they can actually call each other.  While the rotary phone is dated 60’s tech, the phone simulator is dated 90’s tech.  It was used for testing and demonstrations as far as I can tell.  I also got that one off ebay and it works great.  The rotary phone on the table is plugged into this thing as is the modern cordless phone, which I keep in my pocket.  The whole thing is switched off until we hit the right part of the game, when I reach into the box and flip the switch.

Eventually the two psychic players want to talk about the weird dreams they’ve been having, which is written about in their backgrounds.  When this comes up, I hand them each an envelope and tell them inside are some photographs which represent your dreams.  They can describe the photographs to others in as much detail as they like, but they can’t show them to anyone.  Here are the photos: 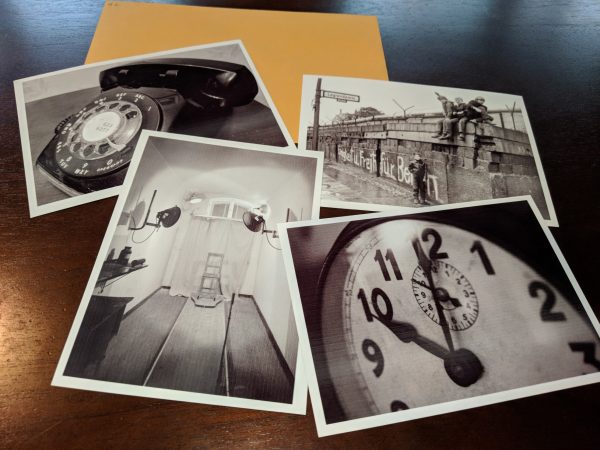 This is another place where I’ve edited.  Originally there were like 8 or so photos, but I dropped it down to the four most important ones.  The biggest clues in here are the phone and the clock.  The phone, if looked at closely, is not the same one as is on the table.  It has a different number on it and no sticker.  The clock indicates 10:00, and I start the game in early afternoon so their first opportunity to line up is 10 PM.  The goal is to get the players to try and call that number at 10 PM game time.  The picture of the Stasi interrogation room comes into play later, and the graffiti on the wall is used as a code to verify the integrity of the caller.

If the players went to the street in the picture they’d find there is no graffiti.  When they call their contact the first thing he asks is “what is written on the wall at Legiendam?”  The correct answer is “Einheit und Freiheit für Berlin” or “Unity and Freedom for Berlin”.  The contact then responds “only in our dreams”, which is meant to become their repeated call and response throughout the game for verifying each others identities.  Side note – usually players stumbled over trying to pronounce the german words phonetically and I’m always very lenient.  Once I had a player that knew german and actually gave me the english translation and it was brilliant.  I’m thinking maybe I should write the translation on the back of the photo in future.

The problem is, no group has yet figured out that they’re meant to call that number at 10 PM.  I thought it was an obvious clue, but apparently not.  My backup is to have the NPC call them, which is honestly a great surprise moment when the phone suddenly starts ringing, but it has been awkward trying to encourage the group to return to the lab in time to get the call.  By that point they’re chasing every foolish lead and I’m starting to feel like we’re losing the thread of the game.

Two groups did actually figure out that they should call the number, but called much earlier than 10 PM.  The other end is supposed to be a phone at the hospital where the East Germans are held prisoner.  10 PM is when they can get to the phone and it’s unattended, otherwise I have a regular nurse answer the phone as if a normal person is calling the hospital.  This gives the players some clues (we’re calling a hospital in East Berlin), but doesn’t get them in touch with the important NPC yet.  Unfortunately this also means that maybe they think calling that number is a bad idea?  In both cases I just had to have the NPC call them back later when he realized they weren’t getting it.  How he obtains their phone number is glossed over.

Now, keep in mind that the end goal here is that the East German patients are in fact another table of gamers running another game simultaneously.  That means that organizing the call for a specific time is basically impossible, and that I can’t have the plot stall out if the call isn’t made.  I have no idea how to reconcile this.  In fact, I’m now thinking I should stop worrying about that and abandon the multi-table idea in favor of just making this game more fun.  Having the phone ring is a great surprise, so maybe I should edit the game a bit to have that always happen at a specific time?

OK, so, I’ll end with one anecdote about the best instance of the phone being used.  My players had toyed with the phone a couple times and assumed it was dead.  The psychics eventually decide they should try calling the number.  Lange picks up the phone, and the player suddenly looks startled as she realizes there’s a dial tone.  She hesitantly starts dialing the number as I nod encouragingly at her.

My little joke I play each time a player makes the call is that I let it ring twice, pull the cordless from my pocket, and say “excuse me, I have to take this” and leave the room.  Then I talk to the players over the phone in character as whichever NPC they’re calling.  I mean, I think it’s obvious to everyone that they’re going to talk to me, the GM, on this phone.  Perhaps in this case it was just the general social anxiety associated with talking to a “stranger” on the phone, but the player freaked out once I started talking to her into my german accent.  I heard a muffled “you take it!  you take it!” and then a new player’s voice says hesitantly “Hello?”  It’s perhaps the most visceral spooked-out reaction I’ve ever seen at a horror game I’ve run, and my only regret is not being in the room to see it happen.