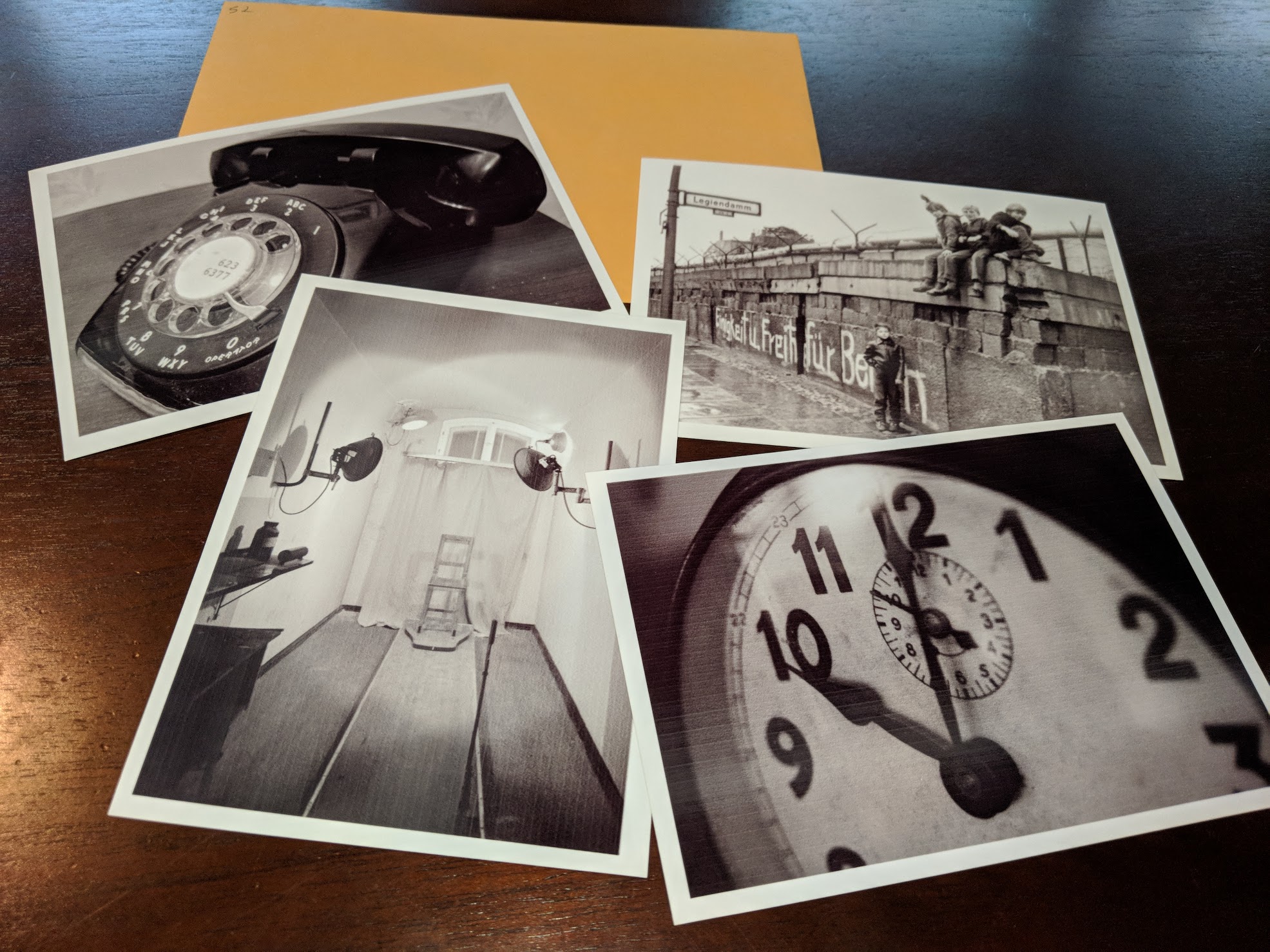 OK, I’ve put off blogging about Checkpoint Zulu for about as long as I could.  I know there are still some folks out there who read my blog and might still get a chance to play this one.  I encourage those players to restrain themselves and skip over these posts until you’ve gotten a chance to play it.  Spoilers abound!

The other reason I’ve avoided posting about this adventure is that its design has been so squirrely.  I’ve made large changes after each run and I’m still not really satisfied.  The pacing on this one is tough, and what’s worse, I continue to try and watch for how this could be adapted into a two table / two GM game, and I’m just not seeing it.  You see, the idea for this game was born when Adam and I were driving home from Carnage on the Mountain last November.  The idea was simply this – two tables each playing on opposite sides of the Berlin Wall, connected by a telephone line.  So, keep that idea in mind as you read these posts, and I challenge you to help me figure out if it’s really even possible.

OK, so let’s start with the characters.  In the first run of the game, I had the following:

The premise of the game is that psychics are being experimented on by both sides.  In the West it’s fairly benign, but in the East it’s very aggressive, with psychics being abducted and imprisoned in a “hospital”.  The Eastern psychics are reaching out to those in the West, trying to create a psychic bridge to escape.  They uncover something like the upside-down from Stranger Things, and work on a way to pass through.  Naturally there are terrible things in this other realm, and as the tunnels between it are anchored to the psychics themselves, a psychic passing through a tunnel is like passing the point of a needle through its own eye – all of reality may fall apart.

So, I had the above characters and my typical intro of an opening scene with the characters each trying to apply pressures to each other and with knowledge to pass between each other.  Pivotal was relationship between Spike and Dr. Richards, as Spike’s dreams have the clues required to actually directly contact the Eastern psychics via normal physical means (a telephone).  The problem was, with this very tense espionage theme, the players didn’t necessarily want to share with each other, and in that first game Dr. Richards and Spike just weren’t putting the pieces together.  I realized that I had hinged far too much of the plot on certain characters having specific conversations. If Dr. Richards and Spike didn’t figure out the dreams, or if Sgt. Major Thompson didn’t threaten to shut down the whole project, the plot might not ever really come together.

Also, I was worried many of the characters did not have very strong ties to each other or reasons to work together.  Camille was a sore point as his character was friends with Spike and didn’t know anyone else.  Envisioned as the “second story man”, his background was full of info about actual escapes across the wall, which lead that player to think his role in the game was going to be to smuggle people physically across the wall (close, but I wanted them to try and use these psychic tunnels).  In fact, it readily became apparent that those kinds of skills weren’t very useful in this adventure at all.

So, I decided to make Dr. Richards and the Sergeant into NPCs.  I promoted the latter to the Lt. Col. in charge of the entire Detachment A, and then made half the party into members of that detachment.  Kilroy was pretty easy to adapt, and Camille was modified to be a little more face-man / surveillance expert and less of a break-and-enter specialist.  The sergeant himself became a straight forward weapons specialist and bruiser, and later I realized I’d accidentally reinvented three quarters of the A-Team.  I eventually decided to embrace that, and started playing the Lt. Col. like Hannibal to round it out.  In fact, I even used this description when they first enter the room: “any one of the detachment A members could probably blend into a crowd, but together as a team they stick out like a sore thumb”.

I needed to add in one more character so I created a second psychic, this one a teenager who is a little more sheltered but is ready to rebel and kind of idolizes Spike.  That allowed me to give them both the same psychic dreams which was nice as it both gave the dreams a stronger feeling of import, and allowed them to compare notes and help each other decode them.  And if they weren’t putting it together, I could play the NPC version of Dr. Richards to give them additional clues or push them along.  I left Mitchell more or less as is, because come on, you’ve got to have a straight spy in this game.

Here are the tent-stands and props I used in the latter runs of the game, and I think at this point I’m pretty happy with the characters: 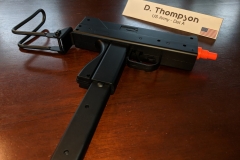 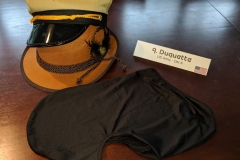 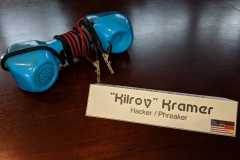 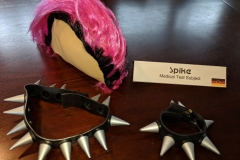 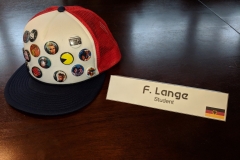 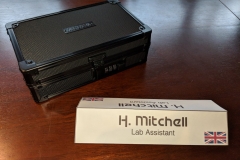 You’ll notice that Mitchell’s character includes a locked black box.  This was all the players got to see before choosing characters.  This had the desired effect of everyone suspecting Mitchell was not all he or she seemed, but without actually telling them specifically what was up.  Here’s a picture of Mitchell’s case opened up (I gave the player the combo right away): 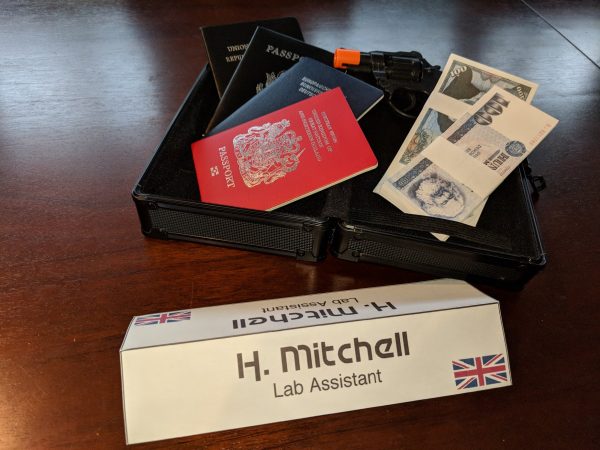 One other minor point about the characters – I intentionally left them all ambiguously gendered.  I thought this would be a clever way to handle any gender combination and let each player do whatever felt comfortable.  For the most part players played their characters as their own gender which made things pretty easy.  It was rare to see anyone in Detachment A played as female, which is historically accurate (there wouldn’t have been any women in Detachment A in 1983) but I think a female version of any of those characters would have been very interesting.  I saw both male and female versions of all three other characters, and my personal favorite combo was a female Lange with a very openly gay male Spike.  Honestly, that duo turned into my favorite pre-made relationship and I was very happy to see every pair of players always play them as platonic or sibling-like and never romantic.

So, those are the characters.  I know I’ve been a little vague on the plot – I’ll write more about it later, but hopefully the broad strokes are enough to give you a sense of what’s going to happen.  I also want to write a bit about some of the other physical props, some of which were really great and others that I eventually cut.  Ultimately, with each iteration I accrue more stuff and have more options, and I’m starting to wonder if this whole thing might not be best expanded out to a larger format.  Maybe a LARP?

3 thoughts on “Checkpoint Zulu: The Characters”