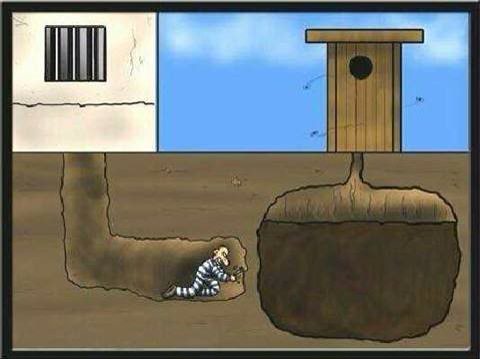 Last weekend I ran my Checkpoint Zulu game again, and while I believe everyone had a good time, the design of this adventure continues to resist improvement.  Inevitably I end up having to push hard to get the players out of dead ends and into situations that bring forward the horror elements.  This leads to a horrible rush at the end during which suddenly all the players go from no insanity cards to dozens, and the “downward spiral” of madness I’m after becomes more of a straight drop off a cliff.

I was discussing this with one player, and she mentioned that the typical flow of horror games she’s played is that it starts out with some investigative process that feels pretty “normal”, and then about halfway through the whole thing goes sideways and the players are left with only the ability to react to the horrors they are encountering.  This sounds about right to me.  She mentioned that what felt different in this game was that the “sideways” elements are self-inflicted.  The players are required to come to certain conclusions and take certain actions for everything to go sideways.  In fact, probably the best thing for the players to do would be to halt their investigations and just go home.

We both agreed that this was in fact kind of cool, but it puts too much reliance on the players to make the action happen.  For a counter point, consider my previous Mazes and Monsters game.  In this game the players screw themselves by investigating a mystery, but the terrible things have already happened.  The reason everything goes sideways for the players is that their investigations lead them to a place where they are forced to encounter the horrors released before the game even started by NPCs.  The investigative stage of the game all points to a single location, and once the players finally decide to go there the adventure turns on a dime and the players find themselves trapped in an unescapable situation.  All that’s left at that point in the game is to watch them suffer, which is frankly the stated goal above – to experience the downward spiral into madness, possibly interrupted only by a sudden violent death.

In Mazes and Monsters there’s really only so much the players can do at the university before they run out of leads, and the only clue left is the one that points to the closed up amusement park.  Once they get there the game becomes incredibly easy for me to run – while there are many avenues for the players to explore, every one of them leads to truly horrible consequences.  In Checkpoint Zulu, the players must do the following things:

Now, I have an NPC on the East Berlin side that can do a lot of these things for the players and motivate them to do the rest.  His name is Iggy, and he’s in fact already discovered all of the above and is trying to execute a plan.  He sent the dreams to the players, and once he has phone contact with them he can tell them about the portals and his hope to use them to make an escape.  Unfortunately, just getting the players to the point of making the phone call has been difficult, and often I just have to have Iggy call them directly.  Also I have to wait for the players to choose to come back to the lab, because it’s the 80’s and that’s where the phone is.

OK, so how do I fix it?  Here are various ideas:

Reduce the quantity of early investigations.  The players always spend forever on this stuff.  I’ve already reduced it somewhat by writing up police reports, and yet every group immediately then wants to track down the individuals in the reports, who frankly don’t have a lot to add beyond what’s already in the report.  One option would be to have fewer reports, though honestly the incidents in of themselves are not terribly revealing, it’s the common repeated elements in them that stand out — they all involve a blue light, they all involve seeing an East German soldier, and they all involve drug use.  Alternately I could make it easier to investigate them, say by having all the individuals in a holding cell for easy interrogation.  Or I could simply cut the investigations short with a little deus ex machina (see the next item).

Add an NPC psychic.  One thought I had was to add another psychic that’s an NPC, whom I could have Iggy contact or could contact Iggy if the players aren’t doing so.  Perhaps this psychic is back at the lab in a coma after taking some of the doctor’s experimental drugs.  This would be a convenient excuse to have this NPC not join the group, and then I could snap the NPC out of the coma whenever is convenient for me.  In fact, if the players are across town I could have this character try an experiment with Iggy that creates a highly visible blue flash of light to draw the players back to the lab in a hurry.

Connect the phone prop into the setting.  The phone is on the table as soon as we start, and the players usually assume it’s just a mood setter.  This plays well for the surprise moment when it rings or they try to make a call with it.  However, it does mean that the players may completely disregard it.  It might be worth describing the lab in more detail (maybe I could even draw a map), and mention that the phone prop represents the actual the phone in the lab.  A side benefit is that this may draw attention to the creepy “this line is monitored” sticker on it, which is also an interesting element for the players to discuss.

Force the dream analysis.  The two psychics both have stuff in their background about having weird dreams recently that they’d like to discuss with the doctor.  Most players seem to interpret this as being pretty personal, or at least personal enough that they don’t want to discuss it in front of the Detachment A characters, and so try to get private time with the doctor to talk about it.  This time around, they both completely dropped it in favor of doing the investigation stuff, and it took forever for the dreams to even come up.  Maybe I could have this be a case where the doctor is a bit uncouth and just brings it up in front of everyone: “So, you mentioned on the phone you’ve been having some bad dreams.  Tell me about them.”

Get rid of the Lt. Col.  The opening scene starts with two authority figures – the doctor and the Lt. Col. who is in charge of the Detachment A players.  Maybe I should just have the latter stay at the base.  He’s got more important things to do, he can give them some orders and send them off.  Maybe he even instructs them to call him if they uncover any evidence of the research bearing fruit.  That way I can still have him deliver the idea of using the psychics to investigate the police reports, and introduce the phone prop as a thing to play with before it’s actually connected to anything.

OK, I hope the above was of interest to folks reading this blog.  I think it’s actually helped me quite a lot.  I will make some of the above edits, and likely run this again at Carnage on the Mountain in November.  Hopefully I’ll have some success to report back.