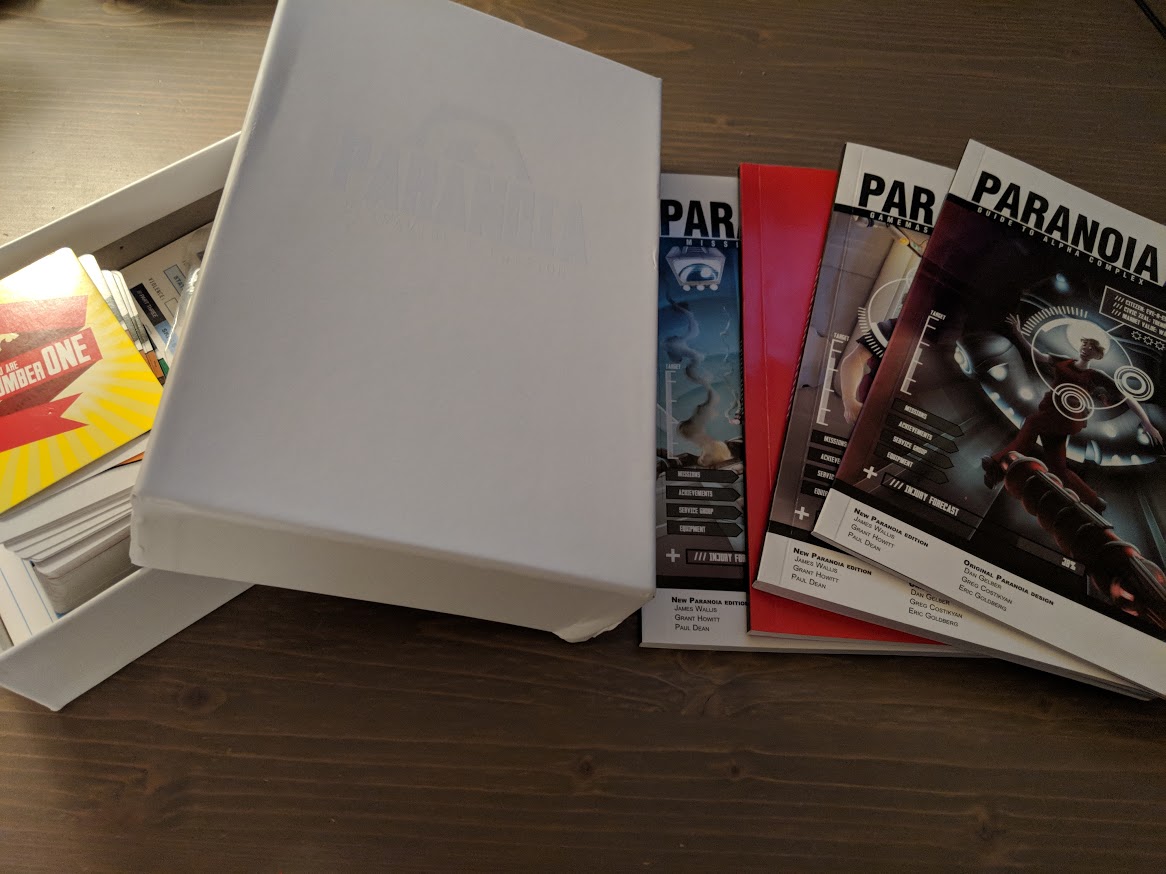 In what seams like eons ago, I backed the kickstarter for a new edition of the Paranoia RPG.  Everything written about it in the pitch sounded right up my alley.  Then the kickstarter took forever to actually deliver a product.  By the time the thing finally showed up at my door, frankly I had kind of forgotten about it.  So I put it on the shelf and never really got around to reading it.  This past weekend I made one more try, and it finally clicked.  If you own this box set and like me have not really processed the content, I give you this one strong piece of advice:  Read the Mission Book.

For a little background, I’ve run paranoia a few times in the past.  I ran a game of 5th edition back in college, and later XP for some coworkers probably almost 10 years ago now.  I love the setting, themes, and mood, but I’ve always found the rules a bit cumbersome.  The last time I ran the game I was thoroughly exhausted by the end of it, and decided it would be some time before I attempted that again.

The new edition has a lot of the same great feel, and a few weird ideas that I find very appealing.  The update on the original kickstarter about the resentment-building character creation system is what brought me to the table.   The cards seem to give the players a lot of leverage to contribute to content to the game, and the play style appears to be highly improvisational.  And yet, try as I might, for over a year I just couldn’t make it through the books.  Let’s review what’s in the box and find out why:

Forms and Character Sheets – Clever accessories are nice, and I appreciate them, but they are clearly not the game.  Sure, you can learn a lot about a game from its character sheets, and in this case the presence of heavy cardboard stock laminated to be usable with dry erase markers is quite telling.  Still, these items quickly get shuffled to the bottom.

Cards and Dice – The tools of play.  The text on the cards really hints at the improvisational style of the game, but they don’t tell you how it all works together.  On to the books!

Guide to the Alpha Complex – The smallest booklet (40 pages) is filled with the basics of the setting.  Actually, it’s pretty good at outlining the stuff that was added in this edition, and it’s a nice hand-out for the player at the table that’s never heard of the game.  But it definitely does not explain how to play.

Players Handbook – Cleverly colored bright red and clocking in at 72 pages, this book is full of details on the mechanics of the game, but all from the player’s perspective.  And this is a game where previous editions have lightly claimed that “knowledge of the rules is treason.”  Of all the books this one was helping me the most when I first read it, but naturally there are many places where it backs off and says “the GM will handle this.”  So for example while it explains how the action cards are used in combat, how turn order works (with hilarious bluffing mechanic), and how to roll the skill to try and hit, it then says “tell the GM your score.  They’ll work out what happens, and who gets hurt, and fill you in on the gory details.”  After reading this book I felt like I knew how to drive the car, but did not yet know the rules of the road.

Gamemasters Handbook – The largest of the books at 128 pages, and the hardest for me to get through.  This book leans heavily on mood and setting, and implores the GM to lean into the improvisational nature of the game.  What it’s lacking though are practical examples.  Trying to answer my combat question above, the index tells me that “Running Combat” begins on page 96 (wow, that late?), and flipping to that I’m treated to two whole pages on initiative and using the cards.  But, how many successes do I need to hit?  Where the heck is that?   Eventually I found a task difficulty chart on page 20, but just has vague words like “quite hard” or “difficult” and no guidance on how to apply them.  In fact, it’s quite flippant about it:

…players will be rolling [dice] all the time and asking about NODE modifiers and other things that we haven’t described much in this book because interesting stories are not made of numbers. All you need to do is tell the players to roll some dice and ask them how many successes (5s and 6s) they get. Then work out how difficult the task they’re attempting is, on a scale of 0-5, and compare the two.

This comes at the end of a section that reassures the GM repeatedly about the strangest concept in here – the GM doesn’t ever roll dice.  Neat!  But, how then do bad guys shoot at players?  When exactly does that happen, and how do we determine if they hit?  Trying to read the GM’s handbook cover to cover just left me with more questions.  It kept assuring me that it’s OK to make things up as I go.  “Players like consistency, and they don’t like to feel that the GM just making it up as they go along.  The poor, blind, fools.”  I love these concepts, but there are never any practical examples in the book.  How do I apply these ideas?  I just don’t get it!

Well, it turns out, the best thing to do is open the last book:

Mission Book – Some introductory adventures, which I stupidly ignored.  I mean, how could I grok the contents of a mission if I didn’t understand how to run the game?  Well, it turns out the designers are good game designers and did what seems popular these days – they created their intro missions to be something of a tutorial.  This book contains three missions that intentionally introduce the rules slowly over time, and are chock full of practical advice to the GM on how to run the each session.

Now I’m kicking myself.  I should have started with this book!  Not that anything in the box suggests I do so.  But at least it’s finally making sense, and now I’m fired up to run this thing.  In fact, I think the best thing to do would be to find a group to run through the first three intro missions just so I can familiarize myself with the play style.  From there, I’m looking forward to adapting the one paranoia mission I wrote many years ago to this ruleset, as I think the free-wheeling improv style of it will really fit the content.

And if everything goes very well, maybe I can have something ready for use at Carnage in November?  I’ll let you guys know how it goes.