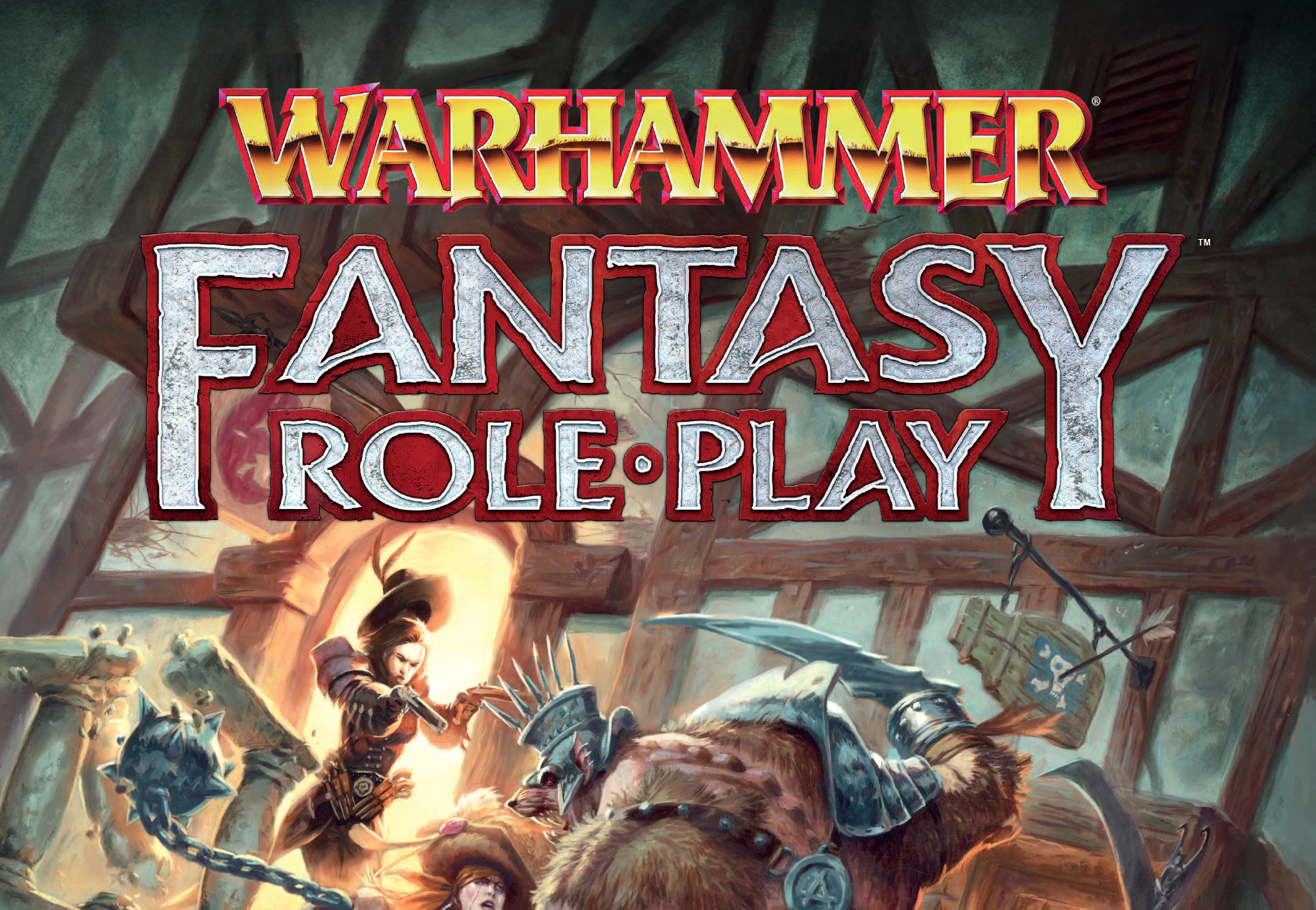 I finally got my preview copy of the Warhammer Fantasy RPG, 4th edition.  So far I’ve quickly scanned the text, read in detail the parts I particularly found interesting, and then sat down with a blank character sheet and tried to create a character.  I think the next thing I’ll want to do is run a mock combat with a player or two, and then eventually run a full game of it.  So, given that as of right now my knowledge of the system is somewhat superficial, here’s some initial reactions:

Return to Roots – It seems like WFRPG, regardless of which company is currently publishing it, is always following D&D’s lead a couple years after the fact.  WFRPG 3 came out almost exactly 2 years after D&D 4th edition, and there were a lot of similarities — not in mechanics, but in how different they were from their progenitors.  Both games really eschewed the core mechanics of the previous version and introduced a ton of new concepts, and I’d say both got a pretty tepid reception.  Well, like 5th edition D&D, 4th edition WFRPG is a definite return to the game’s roots.  If you’re familiar with 1st or 2nd edition WFRPG, then you’ll be very comfortable with 4th.  Don’t get me wrong, it definitely has some interesting changes, but it feels more like they started with 2nd and tried to improve it rather than completely tossing everything and starting from the ground up.

XP Bribes – A lot of fantasy games try to encourage a humanocentric setting with game mechanics.  Look at D&D’s demi-human level capping, or the free feat in 3rd edition for humans (or similarly the free edge in most Savage Worlds fantasy settings).  It’s a minor detail but the very first thing I really noticed in this book, when rolling for species (formerly called race) there’s a 90% chance of getting human.  Furthermore, the rules try and bribe the player into going with random rolling through XP grants, something they continue through many stages of character creation.  After rolling if you go with your first roll you get some bonus XP, or you can roll again or even just choose outright, and miss out on the free XP.  I’m not sure this is really a significant detail, but the pattern of XP rewards for sticking with the initial random result struck me as kind of weird.

Percentile Based – The game is actually still strongly percentile based.  Everything is a target number in the range of 1-100, and you’re rolling percentile dice trying to roll under the target.  Now, the earlier promise of “open ended” is technically there as your skills can exceed 100.  This just results in getting free “success levels”, a mechanic used throughout the game for tests where you want more than just a success or failure result.  Basically it’s a simplified version of 2nd edition’s “degrees of success”.  It’s still kind of increments of 10 under the target, but we just discard the ones place and subtract the rolled tens digit from the target tens digit.

This does mean there’s a bit of fudge factor in there, but I appreciate the simplicity especially given that the tens digit has its own die.  They even go so far as to suggest inverting the math for an even faster result – just use the tens digit out right.  This means you get more success levels the closer you are to your target number without going over.  I love that simplicity and I’d be very tempted to use it, however, I could see players disliking it given that it makes it less obvious when to cheer a result.  Seeing a 01 on the dice is the equivalent to the natural 20 of D&D, and you kind of lose this when you invert the math for success levels.

Combat – I do believe they’ve fixed my major complaint about combat.  Specifically, there is no longer an “Attacks” stat, so you don’t get more attacks as you level up.  Furthermore, the core mechanic for combat involves a contested roll between you and your target.  You subtract your target’s success levels from your own, and if it’s positive that’s the amount of damage you do.  Not only does this remove the extra roll for damage, it gives us a mechanic that actually scales with relative ability between combatants.  A very skilled combatant is going to wipe the floor with an unskilled combatant by doing massive damage with every hit.

Also I think this is how they addressed the problem of constant whiffing at low level.  If we both have only a 10% in our combat skills, we’re still going to hit each other and do lots of damage.  Sure, we’ll be subtracting negative numbers from other negative numbers which is really unfortunate – “I got -5 successes, he got -8 successes, so I do 3 damage.”  Still, I think it will do what it’s after in speeding up combat, and I’m very eager to take it for a spin.

Careers– Career progression is a bit more rigid. Careers have been grouped into broad categories called “classes”, and each career has been broken down into four levels. There is still the ability to change careers, but it’s cheaper to stay within your class, and tnere’s penty of advancment to do within any given career. It’s a bit more linear, it lacks the branching of 2nd edition, but perhaps this makes it easer for the GM to predict where your character is going? I’m not sure what to think about this system yet, and probably won’t have a solid opinion until given the chance to play it across a longer campaign.

Advancment – Speaking of advances, gain they’ve simplified the math. Each advance is one point and has a direct XP cost to purchase. You can buy as many advances in any stat as you like, but the cost increases based on the number of advances. While purchasing a single percentage point is a bit fiddly, I think in practice you’ll probably buy them in chunks since the cost is relatively low, especially early on. Plus it makes it easier to round out your totals. I suspect when facing a starting attribute of 27%, many folks will quickly buy the +3 to get it up to a nice round 30.

It’s a Preview – The last thing I want to comment on is the overall state of the publication. Cubicle 7 is behind schedule and clearly scrambling to make good with the folks that paid for the pre-order. Thus they delivered us this PDF which is clearly not done. They’ve up front about it being a preview, so anyone getting it should set their expectations appropriately. The layout is gorgeous so it’s easy to be tempted to think this book is pretty much done, but I found a lot of placeholder markers in the text, and a good number of errors. My sample character had two talents that simply were not listed anywhere in the text. Also, I keep looking at the Dodge skill and wondering did they just forget to delete this when they started with the 2nd edition text?