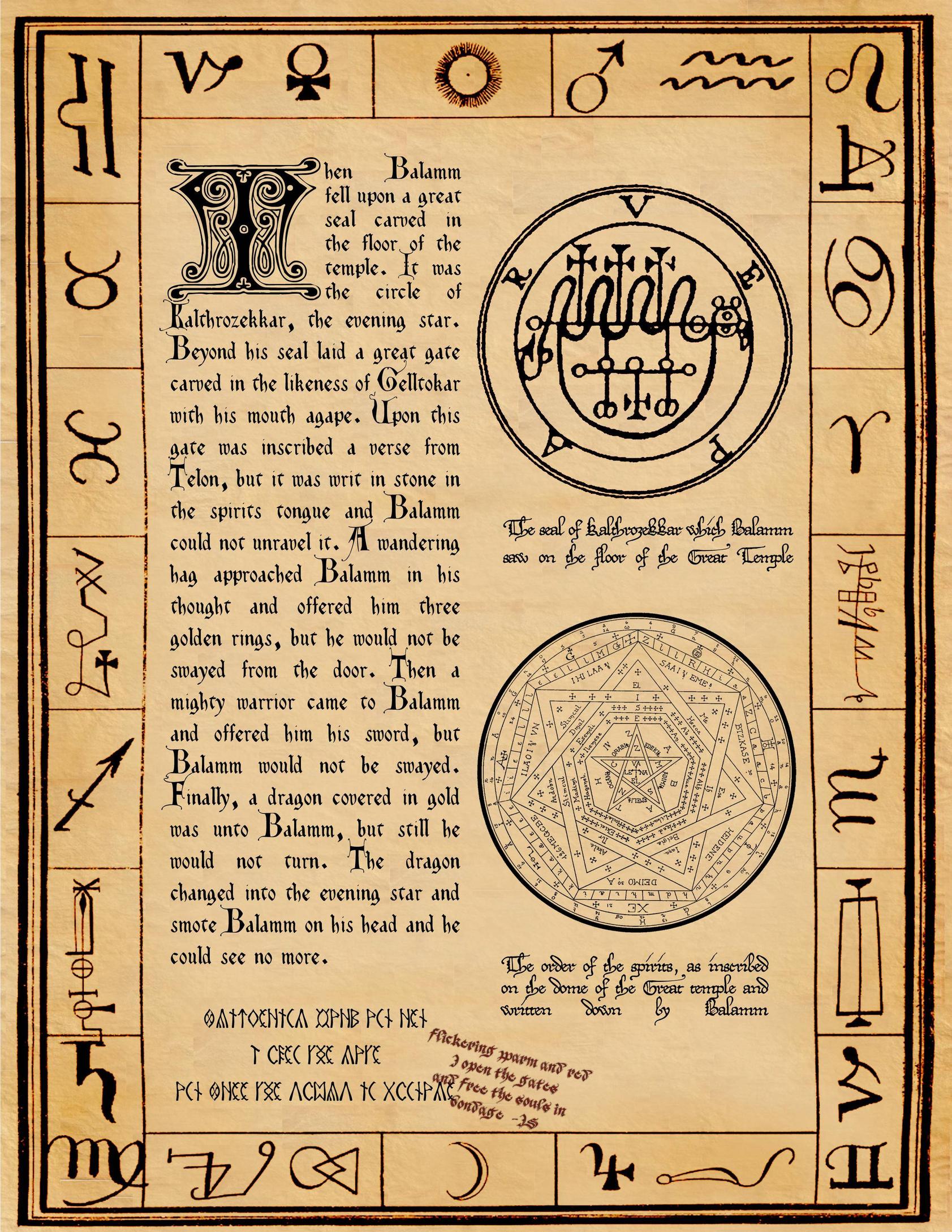 During my run of Mazes and Monsters at Carnage I had one player that challenged me a bit as GM.  He was somewhat withdrawn and since we were having trouble communicating I didn’t push him for input very often.  Then at one point he held up a handout and declared “I figured it out!”  He then presented a key he created that could be used to decode a message on a hand-out I had given the group — only there was no secret message and his translation was gibberish.  What the heck was I supposed to do?

Handling challenging players is a topic in its own right (note to self- write a future post on that), and I try hard to see things from their perspective and not just shut down players when I find them difficult to play with.  In this case the player in question and I just couldn’t seem to communicate properly.  For example, at one point another player said something like “I’m going across to campus to this other dorm” which was followed by a chorus of me too’s.  So I asked the group at large is anyone staying behind?  Nobody said anything, but knowing this one player had a tendency to kind of drift into his own world I pointedly asked him “are you remaining behind or following the group?”  “I’m just writing in my notebook,” he replied.  “Sure,” I said, “but do remain alone in this room to do that or do you go with the rest of the group across campus?”  “I’m just writing notes,” he replied.  Sigh.  Somehow I could not communicate that it was fine if his character wanted to write in his notebook, and I just wanted to know where he was doing that. 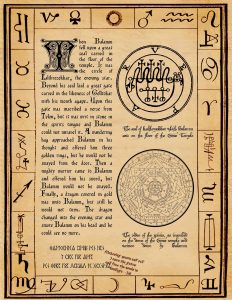 At some point during play the players came across this strange page of writing, and I granted any player who read it in full an insanity point.  I added this handout to Mazes and Monsters after my first play-test, when I realized there weren’t enough supernatural clues in the early investigation.  That’s when I also added the character of the professor who is the group’s DM, and is ultimately responsible for opening the gate to the realm at the amusement park.  This page is hidden in his office for the players to find during their exploration of the campus, along with a few other pages of spooky Cthulhu-esque looking stuff (hint: just do a Google image search for “necronomicon pages”, you’ll find a ton of great stuff).  The major point of these hand-outs is to just give a hint of the supernatural, plus an excuse to start handing out insanity points.  The other pages are purely indecipherable text and images, but I liked this one due to it vaguely hinting at creation of a portal to another world, though it’s a tenuous connection.  The sigils for some reason suggest that to me, and the little note at the bottom says “flickering warm and red I open the gates and free the souls in bondage.”

Admittedly I did not create this hand-out, I stole it from the internet.  The best attribution I can find is this reddit thread where the creator talks about the fonts he used, but doesn’t really talk at all about what it’s supposed to mean.  There is certainly a block of text at the bottom in a strange font, and I always just assumed the nearby texted quoted above must be the translation.  A quick peek at the font used confirms that theory.

Well, back to my troublesome player.  He spent a good deal of time with this page, and jotted notes in the little notebook which is the prop for his PI character.  So amusingly since all the props are returned at the end of the game I actually have his notes.  Here they are: 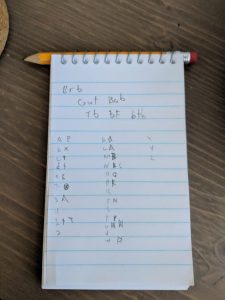 As I said, he was pretty proud of himself when he “figured it out.”  He passed his notebook around and asked the other players if any of this meant anything to them.  Honestly, I wasn’t totally sure at this point if he really thought there was some secret message in there, or if he was trying to roleplay his insanity.  Later he asked me if he could roll his Investigate skill to make sense of it.  I told him that what was on the page is all he gets, and that perhaps there was no secret message there at all.  He seemed unsatisfied with that answer.

On the one hand, I actually kind of think his weird contribution added something pretty cool to the game as a whole.  I’m tempted to steal this for my own future gaming – a finding secret messages where there are none feels like a great symptom of insanity.  On the other, I feel a little bad that this guy couldn’t seem to find the fun he was looking for in the game.  I hope he enjoyed it nonetheless, but I’m not sure if he did.  Like I said he was frequently in his own head space and we just couldn’t seem to see eye to eye, and I had five other players at the table to worry about.