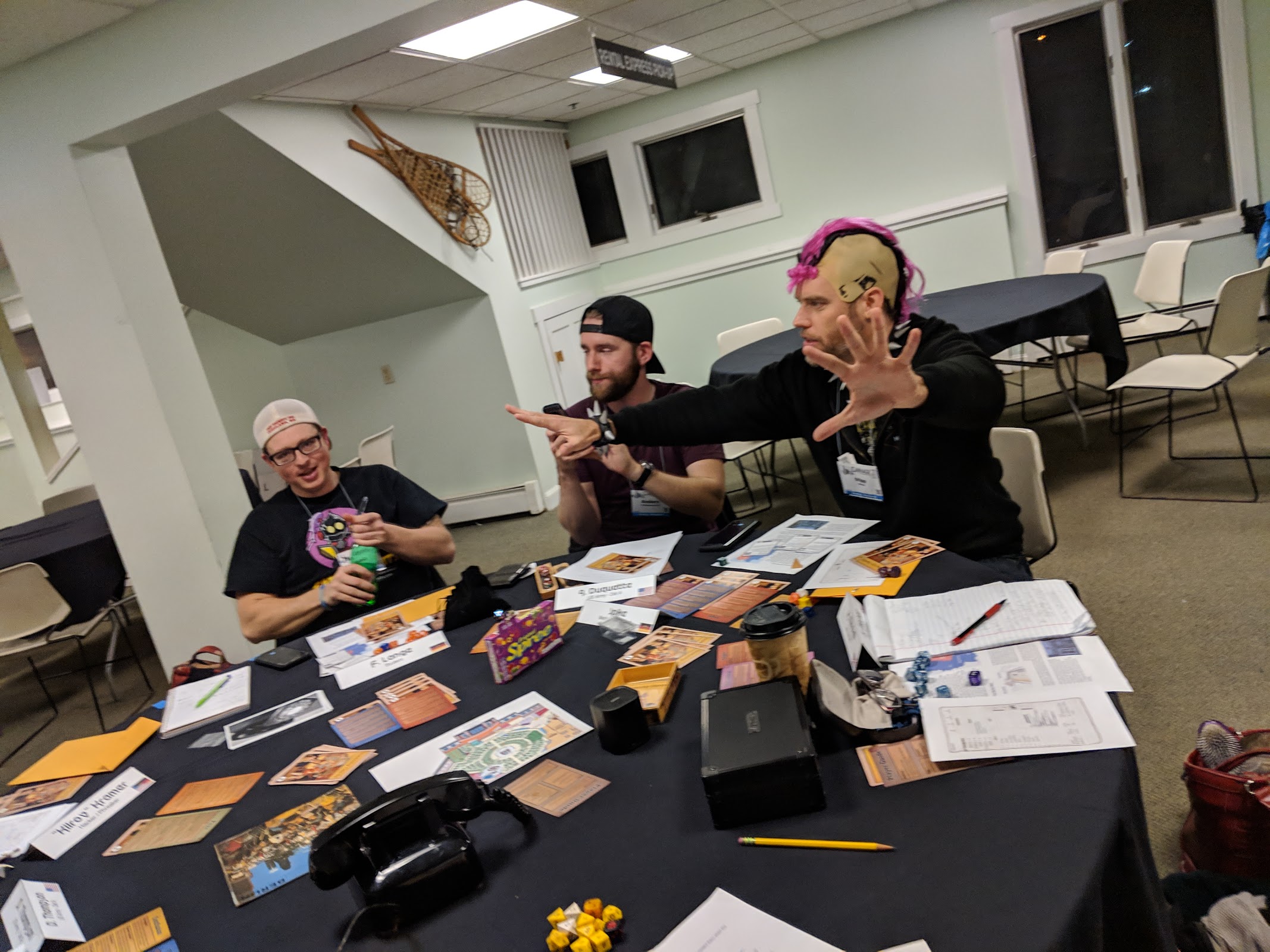 For my game of Checkpoint Zulu at Carnage last weekend, I requested a move to a table near some power outlets.  As a result I was moved from the main gaming area in the Snow Shed lodge to the Group Sales offices in the floor below.  This smaller room fit just four tables, with access to plenty of power outlets, and conveniently mine was the only game run down there that night so it afforded a nice bit of privacy.  I was worried my players wouldn’t find me, but eventually they all showed up, and the game was the best run of this adventure I’ve had to date.

To get to the Group Sales offices the path is a bit winding, going down some stairs and through a large area where I imagine during the ski season they sell lift tickets, but at night at Carnage with all the lights off looks like a place you’re not supposed to go.  As a result, after I brought in my boxes of props, I hung this sign in the door to assure my players they were on the right path: 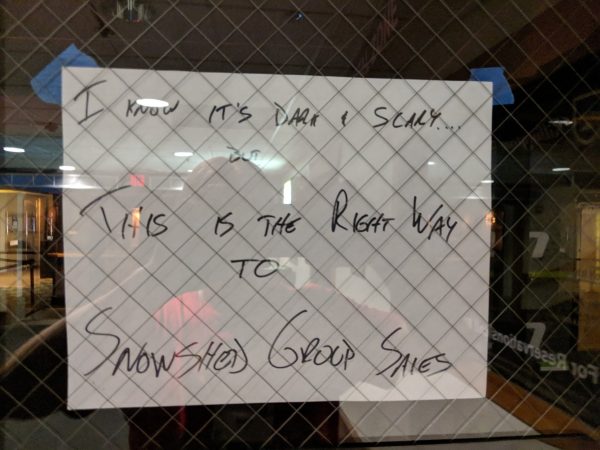 As for the game, it went swimmingly, and I think the key was to stop worrying about the pacing and let the game meander where-ever it wanted to go.  In past runs I’ve always been eager to make sure that I could get the phone call to happen about half-way through the game so it could become a plot device used throughout the latter half of the game.  This though is a kind of a vestigial organ of the game’s original concept of being a two-table game connected by the phone, and the only correct thing to do was remove it.

The fact is, in every run of this adventure I’ve had to date, the players have one or maybe two significant conversations over the phone with the East German psychics. The East Germans are supposed to give the clue that the blue light is actually a portal created between two psychics when they take the drug at the same time.  I always hope the players will piece together the idea of using the portals as a means to help the East Germans escape to the West, but the players simply never come up with this.  I inevitably must spoon feed it to them via the NPC on the phone, and once I do the players immediately trigger the final climax scene of the game.  I think the reason this run worked so well is that I just accepted this and let it happen, and let the players fill the time ahead of the phone call with pursuing whatever leads they wanted.  I tried on the fly to insert as much foreshadowing as possible so when the phone call did happen, it didn’t feel like the game suddenly contorted into something totally unexpected.

There is one important intentional edit I did at the start of the game which I also think really helps.  I made sure to have Dr. Richards tease out info about the dreams from the two psychics in front of all the other players.  They didn’t really know what to make of the images, but they discussed them more and thus exposed details that would be important later.  For example, in this game Spike said he dreamed of a phone, similar to the one on the table.  So as Dr. Richards I asked “Was it this exact phone?  Did it have this warning sticker and this number on it?”  “No,” Spike answered, “it had a different number.”  At that point the player player playing the other psychic Lange piped up “Yes, I know the number” and recited the phone number on the phone in the dream.  This was not only a great moment of revealing they had the same dream, but the phone number they’re supposed to call was now out in the open and felt like a significant clue, even if the players did not yet know what to make of it.

Another interesting twist in this run was that the MI6 player outed herself pretty much right away.  In her background I wrote about how her job is to keep tabs on the Doctor.  It notes that the Americans are allies, but it’s up to her to choose if and when she wants to expose her identity to them.  Every player of this character in the past has kept that secret very tight, and only late in the game is it revealed.  It makes sense, I mean, the character is a spy after all.

However, in this game, while the players were sitting around the lab discussing the dreams I had the doctor step out for a few minutes.  The MI6 agent became suspicious, so I played it up and made his excuses really lame (ultimately his goal was to go out and arrange to buy some of the drugs).  She tailed him, but lost him in the crowd, and so returned to the lab.  I let a few hours go by in game as they pursued other leads – interestingly rather than head down to the police station this group decided to call them on the phone and ask that an officer bring the reports over to the lab.  The game was turning into something of a bottle episode as the players spent almost all their time in the lab.  I made it apparent that the doctor had been gone longer than he claimed he would be, and my MI6 player was getting nervous, so outed herself to the whole group and asked for help.

All this was in like the first hour of play, and honestly it really helped the group gel.  The players of the American agents were suddenly tense.  MI6 is here too?  What the heck is going on?  They all decided that the doctor was totally untrustworthy and had to be hunted down.  So off they went to find him, and I ran the drop scene at the casino where the doctor exchanges military secrets for drugs via identical attache cases with an East German spy.  The players were all over it, running interference, trying to obtain a case, and eventually cornering the enemy spy, who in a moment of inspiration I had commit very messy suicide via a gun under the chin, which then lead to bedlam in the casino.  The group grabbed the (now heavily beaten) doctor, both cases, and raced back to the lab to figure out what was going on.

At that point I realized in real life it was 10 PM – just one hour left in the game, and amusingly the exact same time displayed on the clock in the dreams.  So I made the call, and the players ate it up.  They quickly made a plan to open a gate via massive drug intake by the psychics.  Amped up and ready for anything, the players started shouting at each other and I was presented with this glorious face-off that I captured on my phone:

I told myself I was going to take more photos at this convention, and sadly the above are the only I managed to take.  Nonetheless, it was a great moment to get on film.  They players opened the gate, and naturally everything went pear-shaped from there, and the game resolved as it almost always does in chaos, explosions, and the triggering of World War 3.

in retrospect, I realized this group never tracked down a single lead in any of the police reports.  So many of my other groups spend a lot of time on that.  Which is not to say this group spent none – they read all the reports and gleaned some good clues out of them.  But they had already established the psychic abilities of the two psychics by using their powers on each other, and in tracing down the doctor, so we didn’t need the police leads for that.  And honestly, there’s not a lot of extra info to be had from doing so, most of the info they need is in the reports themselves.

I’ve been trying to figure out if something happened here that I should push for in future – like having the reports delivered, or encouraging the MI6 agent to expose his/her identity early, or down-play following up on the police reports.  But no, I think what worked here was simply letting the game take the shape the players wanted it to take, and then using the phone to trigger the climax rather than trying to use it as a recurring mechanism for information delivery.

I think ultimately the lesson here is to treat this adventure a little more like a sandbox than a play.  I have a lot of pieces, way more than are necessary for any given run, and that’s a strength.  I should let the players take the investigation where they want, inject foreshadowing about the blue light being a portal with nasty things in it where-ever I can, and then use the phone call as my deus ex machina to pull it all together in the end.

I think this helps a lot for if/when I more formally write this adventure up, which I think I should probably do at least for future runs, if not for publication.  But that’s a topic for another post.

6 thoughts on “Shoot-out at Group Sales”