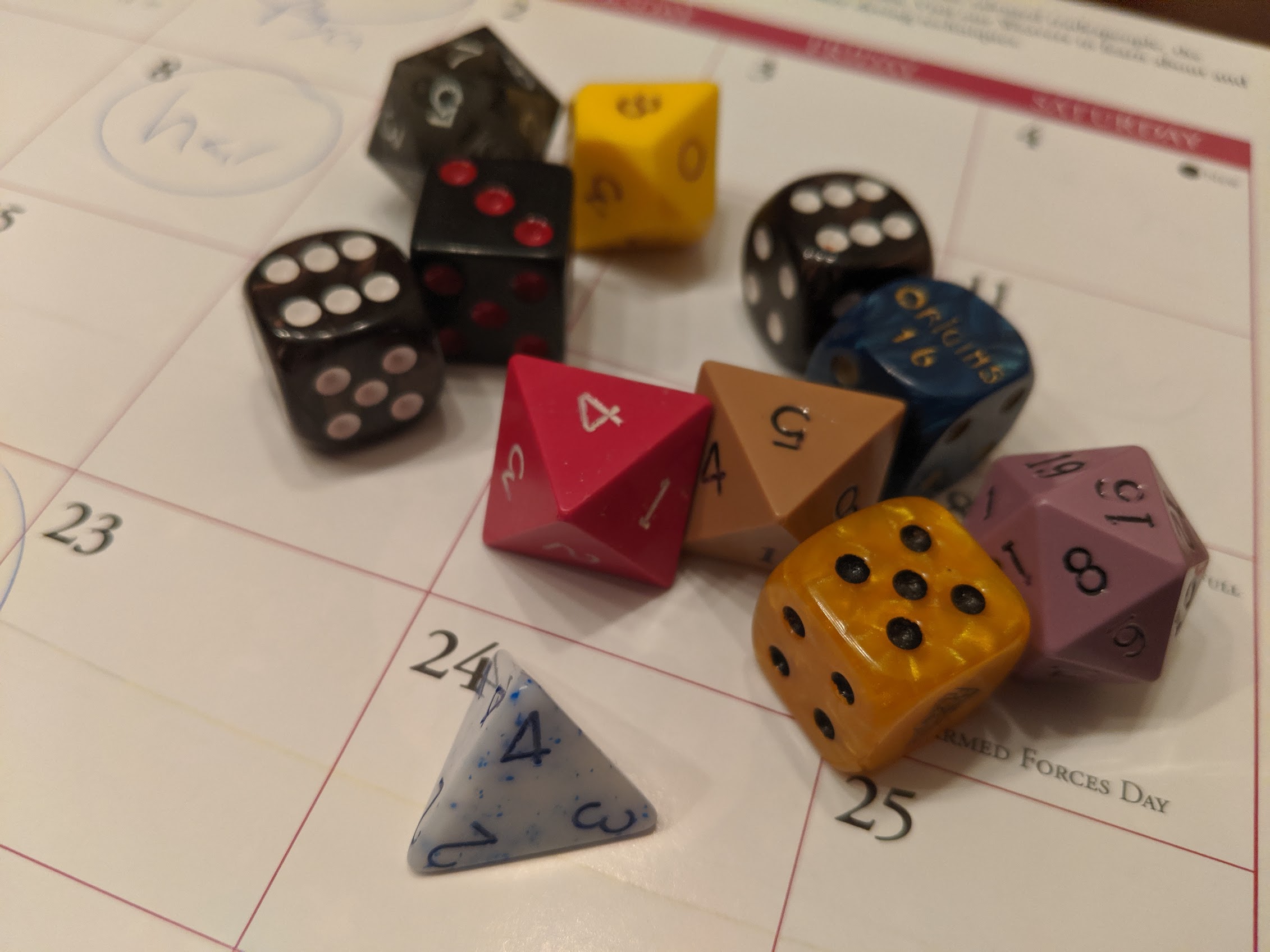 D&D is inherently a social activity – you can’t play without getting together with a group of like-minded friends. Despite the general growing popularity and the fact that I know plenty of people who love roleplaying games, it always feels like an uphill battle just making a game happen. Why is that? And more importantly, what can we do about it?

The fact is that a roleplaying game requires a pretty significant time commitment. Unlike meeting up for a meal or going out to a movie, for a roleplaying game you usually want a good 3-4 hour block of time minimum, and for a campaign you want that much time on a recurring schedule. For most busy adults this is a lot to ask. So what do we do about it? I have some thoughts.

For whatever reason the task of logistics most typically falls on the DM. I suppose that’s because the DM is a lynch-pin participant. If one player is sick or on vacation you can often play without them, but if the DM is sick or on vacation the game is off. That said, having to do all the prep work of running a game and the logistics of getting everyone together is a lot for one person.

I’ve found that if you can find just one player that’s super into it and will take a little of the burden off it helps a lot. Even if they’re just a cheerleader to apply a little social pressure to the group I think that’s valuable. You know what I’m talking about, that player that quickly responds to a cancellation message with “Oh man, I really wanted to play! Let’s make sure we get it together next week everyone!” Maybe your motivated player is also willing to host the game (be it at their house or a location they reserve), or just be the one to send out the reminders to everyone. Any task that can be offloaded to this player is a little more time the DM can put back into game prep. But I think more important is the simple psychological effect this player has on the rest of the group. They act as hype-man for the game, and that will translate to actual attendance.

One of the biggest traps I see in scheduling a game is sending out a message like this: “Hey everyone, we all really want to play D&D together, so let’s pick a date. When is everyone available?” It’s sent with the best intentions, but it will also very likely devolve into chaos. Typically everyone response with the opposite information you’re looking for – they tell you when they can’t play. Suddenly you’re assembling six peoples worth of schedules to try and find a 4 hour gap. Ugh.

I think it’s much better to start with a specific date and time. Maybe if you have that one motivated player you can coordinate with them to pick a date and time. Then send out a message like this: “Hey everyone, we’re planning our first D&D session next Thursday at 7 PM. Who can come?” The pressure is then on the recipients to try and make it work, and to be honest I think they’ll try just a little harder. Or maybe half the group says they definitely can’t do Thursday – that’s fine, pick a new specific date and try again.

Sure, maybe one person just can’t make it work, and that’s OK. Find someone else. I know, you’ll feel bad, and they’ll feel bad, but the fact of the matter is that you just can’t please everyone and it’s better to make a game happen that works for most people than to have no game, right? Also, you were probably going to end up here anyway with the original method of asking when everyone is available. In that case you probably felt more guilty because you were staring at a schedule and realized that picking a date was also picking which friend to cut out. With this method the responsibility feels a little more on the friend’s side than yours, so maybe you feel a little less guilt?

Make It A Party

OK, you can’t get a regular campaign going, but surely you can plan a one-off session or game day, right? Do it, and make it into a party. I am still amazed that I get so many people to drive up to my house once a year for my birthday game. I think if it was just a random Saturday they wouldn’t come, but for some reason the fact that it’s my birthday makes it more palatable. Maybe it makes it easier to explain to your non-gamer friends? “Sorry, I can’t go out tonight, I’m going to Paul’s birthday party” is perhaps a little more socially accepted than “Sorry, I can’t go out tonight, I’m going to Paul’s to play D&D.” Maybe this is less of an issue these days with how popular D&D has become. Nevertheless, I’ve found for whatever reason that planning a party at which we play D&D gets more yeses than planning a D&D game.

My last bit of advice is simply this – go to your local gaming convention! You don’t have to worry about coordinating other people’s schedule, the convention will just handle that for you. But you really want to play with your best friend? Great, invite that friend to go to the convention with you. Honestly, the games you two play in together will be way better for having two players who are already in sync. Sure, conventions games can be a crap-shoot. Going in blind to a convention game honestly has a 50/50 chance of being fun. But there are ways to game that system.

The easiest way is simply this – write down the names of DMs you enjoyed playing with. Yes, this requires that your first year at a convention is half full of dud games. It’s not so bad if you accept that up front and go into it with that expectation. Last game was a dud? It’s OK, maybe the next one will rock. When one does rock, write down that DM’s name. Next year, when you’re looking for games to play, pay less attention to the system being run and more attention to who is running it. Sign up for games with DMs you know rock.

After a couple years, your local convention will feel like home. You’ll play with a lot of the same people every year. You’ll also always meet a couple new people. Those people will recommend games to you with DMs they love, and your list of great DMs will grow. Soon you’ll find it’s very easy to fill your schedule with great games.

Well, those are the ideas I’m thinking of right now – if you have other tricks for getting a game up and running please share! The logistics side of D&D is a pain, nobody likes doing it, and yet it’s 100% necessary. Once a campaign gathers steam though it becomes a habit that’s difficult to break, so bear with it! Good luck everyone.

2 thoughts on “The Logistics of Roleplaying Games”