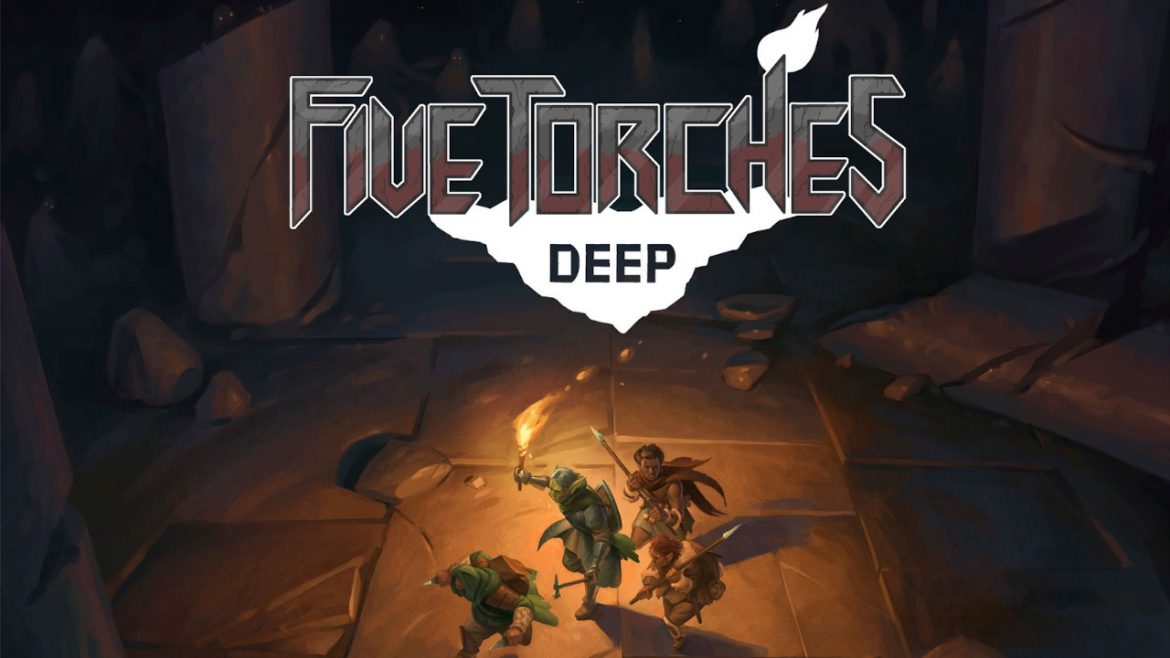 Some kind readers have alerted me to Five Torches Deep, which in its own words is “a streamlined adventure game combining the best mechanics and principles of 5e, the OSR, and modern game design”. Basically it tries to reapply OSR sensibilities to a game that still kind of feels like 5e, which to me is a very interesting endeavor. I bought the thing on DriveThruRPG and promptly forgot all about it, but fortunately I had the foresight to buy both the print and pdf version, so when the print version showed up at my door a couple days ago I finally sat down and read it.

First off, let me just say, the layout of this book is incredible. So much care was given to the presentation I just don’t know where to begin. Let’s start with the fact that it very interestingly is in the format of letter sized pages (8.5″ x 11″), but bound on the short edge. That seems like an unusual choice at first, but then when you open up the book each page is cleverly subdivided into three columns, which translates really well to a mobile friendly PDF version that just displays one column at a time. I was reminded of this because I did in fact briefly download and skim the PDF on my phone when I first bought it because I was surprised to see a mobile optimized PDF option. It looked good! And while I don’t necessarily want to read an entire RPG book on my phone like that, having it in this format as a reference during play seems incredibly useful.

I could go on and on about the layout design aesthetic – of how major elements are attempted to keep to a single page, or how the writing favors concise brevity that would make Dan “Delta” Collins beam with pride – but I don’t have to. It’s all reviewed very thoroughly by one of the authors, Ben Dutter, in this video, which is definitely worth a look:

Honestly, I’m half tempted to slice apart the pages and spiral-bind the thing just to please Dutter, who can’t help but call out that he regrets that it won’t lay flat while open. Personally I don’t really mind that, but I am pretty excited by the fact that I could easily print out the quick reference section and slide the pages directly into my landscape DM’s screen without having to modify them at all. But for now, let’s move away from the layout design and talk about the actual content of the book.

I have to admit, this is one of the few RPG rule books I’ve read cover to cover in a single sitting in an extremely long time. This is likely due to the judicious brevity of the writing, something I also very much admired in my favored B/X books. Though I hesitate to accredit this as a necessarily old school trait, Gygax’s writing was many things but brief is not one of them. Ben and Jessica Dutter manage to even give Moldvay a run for his money, clocking in at just 48 pages compared to Moldvay’s 64.

There are some minor downsides to the extreme brevity of the text. Everything is not immediately discoverable — for example the proficiency by level chart seems to only appear in the quick reference in the back, even though its mentioned frequently prior to that. Also some of the ability and spell descriptions are so sparse I’m not completely certain what they mean. The fighter’s “Orders” ability says simply “movement, ally can active action” which I’m guessing means the fighter can give up their movement action to grant an active action to an ally, but I’m not completely confident in that interpretation. But overall I appreciate the effort and don’t mind stretching my brain a little to figure out the few vagaries, which frankly every game seems to have regardless of the length of the text.

Overall the mechanics are certainly streamlined, and the OSR ideals are well on display. I seriously grinned when I read under the explanation of check DCs that “the GM is encouraged to minimize the need to roll checks at all given the PC’s approach.” I also think there are some very clever bits of combining old school design with that of 5th edition. For example, the classes included are the classic four with the somewhat stylized names Warrior, Thief, Mage, and Zealot (kind of love this last choice). Each one, however, includes three specializations which you can pick from when you hit level 3. Not only does this feel very 5th edition to me, but the choices introduce all the tropes of 5th’s wide range of classes – for example the Mage choices are Sorcerer, Warlock, and Wizard.

There is some unusual stuff here too. There’s an abstraction over “supply” of consumable equipment like potions, food, and torches, and a durability system so all equipment will eventually break. These strike me as neither necessarily OSR nor 5e, though I can see where the authors were coming from. The supply system I suppose is meant to give it a grittier survival kind of feel, and the durability system is I think a pretty clever take on what to do with natural 1’s and 20’s (both result in someone’s equipment getting damaged or possibly even breaking).

Spells require rolling dice and have a mishap table, which while not necessarily a bad idea strikes me as an unusual choice that doesn’t seem in line with any version of D&D. There’s also an interesting mechanism for randomly generating dungeons that involves a Rubic’s Cube. These are all things I’m going to have to try to really form my opinions.

All in all there’s a very interesting blend here of classic D&D, 5th edition D&D, and new ideas that results in a pretty interesting game. I’m actually kind of tempted to show it to my Sunday group to see how they like it. It feels like there’s just enough OSR to appeal to the grognards, and just enough 5e to make the modern D&D gamer comfortable. The question really is, will it all blend together into a fun experience at the table for everyone?

There’s really only one way to find out I guess.