I will try not to bore you with apologies for my absence for the past six weeks.  The next week or two may continue to be rocky as I complete my move, but I hope once the move is done that less time commuting might mean more time blogging.  Anyway… 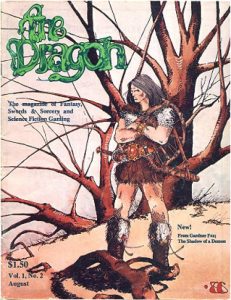 I was testing out some new PDF reading tech during lunch today (more on that in a later post), and found myself opening up some of the first issues of The Dragon magazine.  What caught my eye was a couple articles about the upcoming GenCon IX.  I have conventions on the brain quite a lot these days.  GenCon (44 I think?) is coming up soon, and next April will be HelgaCon 5, for which I have some pretty big ideas.  Reading these old articles reminds me more of my own little mini-con than GenCon actually, with it’s notes on the having over 44 games that year and listing Gary’s personal address as the contact point for more information.  I’m also just tickled by the idea that the scale of the convention and the magazine were at such a point that it was entirely appropriate to include lengthy updates about the convention in the magazine.  It seems things were at a unique tipping point back in 1976.

Of particular note is this blurb in issue #2 about the upcoming D&D tournament:

These 20 groups will comprise the Preliminary Round. After all are finished, the top five players in each class will advance to the Final Round. Thus we will have five groups of five players each. Again, each group will be composed of one each of the five classes. Those who make the final round will play the same class they did in the Preliminaries, but a different character, again with pre-rolled abilities. As before, the Magi and Cleric will select their own spells, and all players will equip themselves.
At the end of the Final Round, FIVE winners will be selected, one in each class. Each will receive a $10 certificate from TSR Hobbies.

Note the scoring system here scores individuals (winners grouped by character class of all things) rather than the entire group as a whole.  And this is back in 1976!  When I was running my tournament at last HelgaCon I assumed this was a product of late 80’s silver age thinking, but it looks like these kinds of tournaments are far older than that.  To be fair, this issue is touched on in the following issue (#3):

“Why an individual rather than a team event?” At the outset of the design phase, we decided on an elimination event by individuals rather than teams because we wanted to gauge how well strangers could adapt to D&Ding together. A team event is not out of the question, of course, and plans for another tournament are now being made around a team concept.

Fascinating.  The implication here almost seems that they tried individual scoring, and then dismissed it in the following year, though I haven’t gotten to reading those issues yet.  Could it be that somehow this lesson was lost in later years when tournament play shifted into the silver age style I remember so well from the 90’s?  Or is it just that in the early days they were more willing to experiment with all manner of methods, such that attempting to glean a “lesson” of any kind from the output is impossible?

1 thought on “The Dragon”