The wikipedia article on GenCon includes the following chart showing growth of attendance over time: 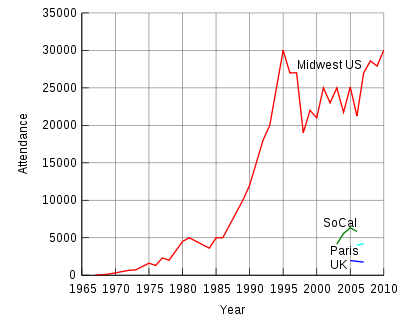 This year is not plotted on that chart, but assuming the number posted yesterday is correct (36,733), the next point would be just off the top of the chart.  What you can see here is some pretty steady and rapid growth from inception until a peak in 1995 at around 30k.  Then there’s a decline, and what would seem to be a stabilization with some fluctuation for several years in the 20-25k range.  Around 2006 though we see growth starting again, which at first seems just part of the normal fluctuation, but gets higher than that usual range in 2007 and keeps going up until this year’s record spike.

The article says that the the success of Magic the Gathering and “the ensuing collectible card game craze has been cited as generating the extra attendance that produced the 1995 record.”  This makes me inclined to speculate about the current spike we’re experiencing.  As far as I know there’s no break-out product to explain it, certainly nothing on the scale of Magic.  Pathfinder and 4e are I suppose both doing reasonably well, but the prevailing wisdom I’ve heard is that the pen and paper RPG market is in the decline.  It could be that board games are becoming more popular in this country.  Certainly if you just look at the map of the dealer’s room from this year you’ll see that the two largest consumers of space are Mayfair and Fantasy Flight.

It’s also interesting to note that this growth spurt happened right around the same time as the passing of Gary Gygax.  Much like the value of a painting increasing when the artist passes, Gary’s passing has certainly brought the public’s eye back onto the old game.  Most kids that grew up playing D&D are now in a ripe demographic — we’re now a bunch of 30-somethings with a fair amount of disposable income and a tendency towards nostalgia concerning the pursuits of our childhoods.  However the growth spurt actually seems to pre-date Gary’s passing just a bit.  2007 saw 27,000 attendees, well above the average of the preceding decade, and honestly if it was pure nostalgia I’d expect a bigger old school presence.  There’s certainly some old school stuff going on at GenCon, and it was cool to see an actual OSRG booth, but I hardly think our little corner of the population could account for 10,000 attendees.

Looking back to 2006 to find an origin of the growth spurt we do see the inclusion of much more video game space.  That was the year E3 was reduced in scope, and I remember seeing the increased video game presence and worrying it might take over GenCon.  That certainly never happened, and in fact this year I don’t recall seeing even a single booth dedicated to video games.  It’s possible that those couple of years of cross pollination between video game players and table-top gamers helped bring in some new blood and grow the industry, but again it seems too small to be the sole contributor.

Well, it’s looking like I can’t find any real answers here.  Maybe a little of everything above.  Maybe something else is going on in the industry that I’m just not aware of.  Either way I’ll be very curious to see where GenCon goes in the next couple of years.