Not much to say about Sunday.  We (Jenn and I) had a game scheduled from 11-3, but we were worried about how close that end point was to our flight out.  We tossed around some ideas of warning the GM that we might have to leave early or at least right on time, but finally decided it would be better for everyone if we just skipped it and let some generics in.  Of course, when we did get to the airport, our plane was delayed 2 hours!  Doh!

Did some roaming of the dealer’s hall, heard some suspicious rumors, and finally packed it in and headed home.  It was a great trip, and I hear there was some serious growth this year (attendance up 20%, games scheduled up 26% according to an article that has since been removed).  I’m already psyched for next year, but I’m trying to channel some of that energy into planning for HelgaCon and TotalCon.

For a final thought, I leave you with the following bit of GenCon history: 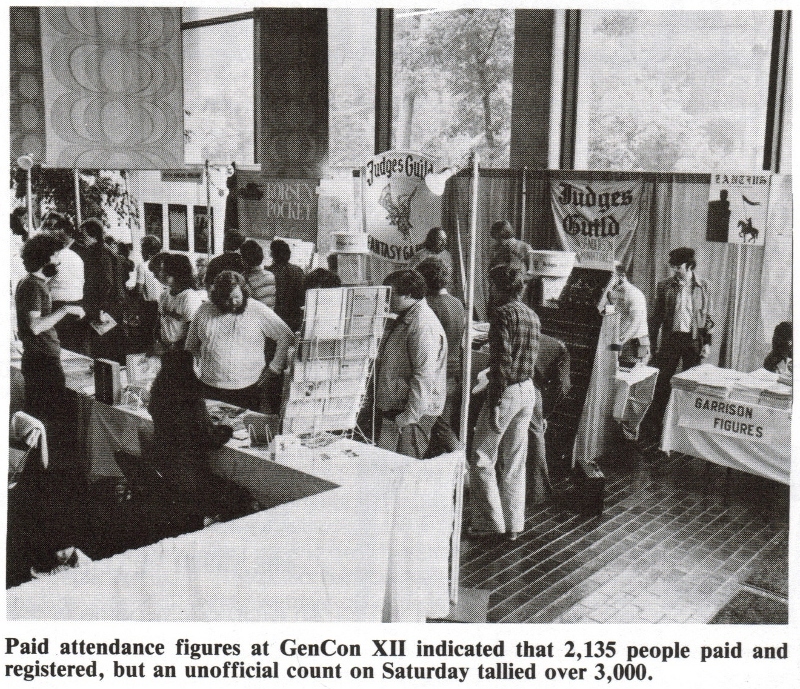 Besides the mind-blowing growth from GenCon 12 (2,135) to GenCon 44 (36,733), what I absolutely love about the above picture is the clothes.  Not specifically the 70’s styles, but the type of clothing.  First thing I notice is the dude rocking the sweater, but if you look around, you can see quite a few jackets, flannels, and other long-sleeved bits of warm clothing.  Either the weather in Milwaukee was radically different in August of 1979, or UW Parkside had some seriously over-powered AC.