Last weekend I watched two movies whose plots center around gaming.  This ups my personal collection of D&D related movies to 4, which may very well be all that exist (actually, I think one of these has a sequel I’ve never seen, so perhaps there are 5).  Anyway, here they are, in no particular order:

This is the one that seems to have garnered the most press.  Certainly I recall when it came out GenCon was quite abuzz about it.  That said, of the four I think this one is my least favorite.  It’s kind of cute, makes some good inside-jokes about gamer culture, and features a kind of clever premise of switching between the same actors playing the players sitting around the table and their costumed in-game characters.  The production value is clearly in the realm of “student film”, and ultimately if you don’t get the inside-jokes you’d probably be pretty bored.

There are two big cliches in gamer humor I find: the player that never shows up, and the girl who joins the group and causes chaos amongst the previously all-male group.  This movie only falls prey to the former, and their treatment of that joke is actually reasonably funny.  Ultimately it’s worth a view, as if you’re reading this blog then clearly you’ll get all the inside-jokes, but I wouldn’t pay the $50 it seems to be asking for on Amazon.

PS – This is the one that seems to have a sequel.  I suppose some day I should try to see it.

This movie is actually an adaptation of some theatrical sketches, and once you know that it makes much more sense.  The writing is quite good and the acting is generally good as well, though it definitely feels more like theatrical acting than movie acting.  The humor is definitely very good here, though again very much full of gamer culture inside-jokes.  The entire premise is one of the gamer humor cliches: a bunch of gamers sitting around talking while waiting for the guy who never shows up.  That’s basically the plot, if you can call it one.

The production value is again “student film” level, clearly made by some enthusiastic actors with a camcorder.  The theatrical background, however, means these guys have practiced these lines and tested them in front of audiences, so the dialog is pretty tight.  All in all it’s very funny, and at $2 streaming on Amazon, why haven’t you seen it yet?

Game of the Year

The first of the two I watched last weekend.  The premise of this movie I find extremely odd: a group of gamers are trying to get onto a reality show whose prize is control of a gaming company for a year.  The idea that a group of gamers would go off to a convention just to all play together, and then somehow be judged on their performance, strikes me as truly bizarre.  That said, really this is just an excuse to explain why someone would be making a documentary about a gaming group.

It’s a little slow to get started, and falls for both the gamer humor cliches mentioned above, but about halfway into the movie I discovered I was really liking it.  I think it does well by making the RPGs simply the context through which the characters interact.  It ultimately is more about how these characters get along (or fail to) and much of the humor is appreciable by non-gamers alike.  That said, the inside-jokes they do sneak in are very good, and kudos for making fun of two gamer stereotypes usually not featured: the old school war-gamer (complete with reference to chit-and-hex games) and the DM who really would be better served just writing a novel.

It’s a funny movie and I think worth the $25 on Amazon.  Be prepared to sit with it for a half an hour though before it picks up.  I promise it will get there. 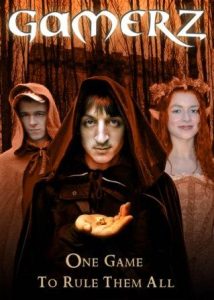 The major draw-back of this movie is understanding the Scottish accents.  Most of the time it’s not a problem, but there were at least two scenes where I didn’t understand a word that was said.  That said, this is a great movie.  It’s the highest production value of the bunch, featuring some really nice rotoscoped animations for portraying the characters in the game, and at least one shot that required a crane.  Really, this is the only movie on this list where you can justify even using the word ‘cinematography’.

The plot kind of falls prey to one of the cliches: the girl whose presence ruins the game, though actually in this plot it’s the DM that’s new to the group.  Still, his presence does start a love triangle with the only female player, which is pretty central to the plot. There’s also a strong theme of misfit finding his place, and a very interesting focus on the creative side of DMing with the main character developing the dungeon through the course of the movie and even associating a bit dangerously close to the main villain of the world he creates.

There are precious few inside-jokes in this one, and no comic portrayals of the typical gamer stereotypes.  Like Game of the Year this movie is all about the characters, whose connection just happens to be that they roleplay together.  To be honest, I kind of like this treatment, there’s no implied comment here on whether the game is good or bad, dorky or serious, it’s just what these people do, the context over which they fall in love, fight with each other, and ultimately form friendships.