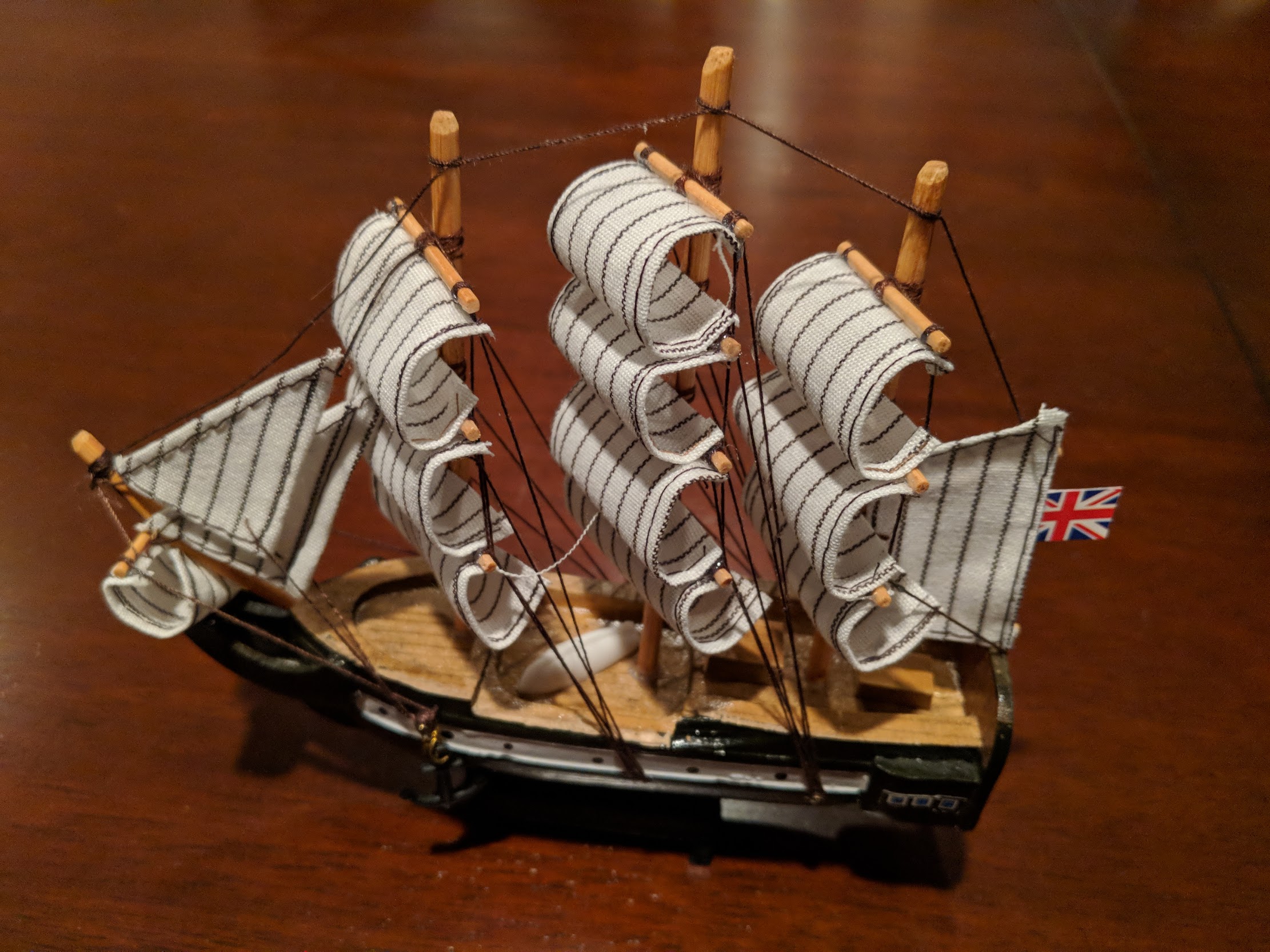 I wrote the scenario Gentlemen of the Wardroom after playing a lot of Cthulhu at conventions and coming up with my idea for Insanity Cards.  I needed a practical exercise of the mechanic, and I had just finished listening to the Horatio Hornblower books by C.S. Forester.  Aboard a British Naval ship in the 19th century struck me as an already horrific experience, and not too difficult a one to add some supernatural elements.  Here’s the convention listing again as a reminder, and then below the spoilers begin – you’ve been warned!

Gentlemen of the Wardroom

Welcome gentlemen to the HMS Orpheus, a fifth-rate frigate of the Royal Navy, bound for the West Indies in this the year of our Lord, 1806. Your orders have not been revealed by the Captain, but sailor and officer alike are thrilled to escape the drudgery of blockade duty, and perhaps at last find a chance for action against the frogs. Beyond the usual threats of harsh weather, deprivation, mutiny, and privateers looms something too dark and horrible to name.

Frankly, I packed way too much into this game.  The original ideas came from some specific plots in books I was listening to on audio — both C.S. Forester and Alexander Kent.  I was thoroughly immersed in the setting by this point, and wanted everything: ship to ship combat, pirates, mutiny, amputation, the living dead, madness, natives, and of course a massive unspeakable evil.  I kept the captain and doctor as NPCs, and filled out the remaining officers on the ship with seven player characters:

Seven was a bit much, and due to a clerical error I had eight players at the table at TotalCon.  And because I’m terrible at turning anyone away, I invented a cabin boy on the fly and made it work.  Fortunately by then I had made a lot of cuts and the game was running pretty smoothly.  It still went over though.

The two major NPCs in the game were the captain and the doctor.  The captain is a very competent fellow but kept his orders from everyone and as we’ll see in the plot he succumbs quickly to dark influences.  The doctor, on the other hand, is a completely incompetent drunk.  I think I took this character directly from one of the novels, and he worked amazingly well.  Nothing really instilled panic in the players like having medical emergencies and realizing their doctor was completely useless.

In my notes I had broken the plot down into 3 acts.  In the first act I intended to introduce the players to the setting, give them a chance to do some normal naval activities, and then end it with a large ship battle.  Sounds straight forward, and yet at the beginning took many hours to complete.  The first mission involved gathering some intel at a friendly port, and the players were challenged with someone murdering the person they were supposed to meet with, and some of their crew sneaking off the ship to enjoy the port.  While players had a lot of fun with this, it took a lot of time and had nothing to do with the horror part of the game, so it had to go.

And then there was the ship battle.  When I first ran this, I wrote a ton of custom rules for adjudicating an actual ship vs. ship battle, with special roles each of the players could take on (manning the guns, ordering the crew, handling the ship, etc.)  Just explaining these rules to the players took forever, never mind the actual playing out of the fight.  By the end I boiled this down to just narrating an exciting battle and letting each player make a single skill check to determine how well they comported themselves in the battle (taking a wound if they really flubbed it).

Act 2 begins the morning after when a strange fogs rolls in and the ship becomes becalmed.  The fog is actually the tendrils of a malignant force emanating from a nearby island, which is not visible to the players just yet.  The captain, wounded in battle, locks himself in his cabin and refuses to let anyone see him, leaving the players to deal with everything that starts going wrong.  And of course a lot does:

Finally, in act 3 the fog clears a bit and the island becomes visible.  There’s so much going wrong on board the ship now that every group I played with split up at this point, leaving some in charge of the ship while others explored the island.  Both parties are ultimately screwed.

On the ship, the captain has completely lost it and starts chanting strange incantations from his father’s old log book.  When the players finally break in on him they see what at first appears to be him facing away from them with his hands held high and the book floating in front of him.  When he turns around he reveals that he’s sewn his father’s withered arm to his own abdomen which is now holding the book.  The incantation starts to raise the dead as zombies, and all those corpses floating around the ship start trying to climb back aboard or break through the hull.

And yes, I had a whole map of the island with all manner of other stuff on it.  What was I trying to do here, run a campaign?  Sheesh.  All that got cut away, and the natives were vastly simplified.  I did eat several players with the island, and one spectacularly so when the poor sod while trying to help someone else critically failed a role and pitched himself into the mouth.  He was my first kill of the night and being so dramatic the players quite enjoyed it.

Other little things that went well:  At first I tried to tell my players about the setting which was a mistake.  I was so immersed I didn’t realize just how much I had internalized.  Eventually I printed out a one-page summary of what a British Navy ship of this time period was like.  I gave it to players as soon as they sat down which meant the early arrivals had something to do while we waited for everyone to show, which is definitely something I’ll exercise in future games.

I also printed out the Articles of War and left them on the table.  In the beginning I describe the captain reading these aloud to the crew before they set sail, which many captains did, but then left it on the table if anyone wanted to read them.  It’s basically a huge list of crimes, most of which are punishable by death or flogging.  It was a fun little element for the setting, I suspect few people bothered to read many of them, but again just seeing this massive list on the table and being told “here are all the excuses the captain can use to brutalize you” was a nice touch.

Finally, anyone that managed to keep it together through the whole game really ends up with only one choice — hop into a lifeboat and avoid both the island and the chaos on the ship.  This always resulted in a very nice scene when the poor saps are sitting alone the next morning in a life boat with no supplies in the middle of open seas.  The ship always managed to sink by the end, and the island vanished with the fog.

All in all I rather enjoyed running this game, but I was my own worst enemy with how much I tried to cram in.  I can imagine running it again, I think at this point it’s well practiced enough that I could do so without too much effort.  If I did I would probably drop one of the characters — 6 really is the upper limit in these games for me.  Also I’d incorporate some of the practices around the cards I learned in my second game, but I’ll get into that in the next post.  And maybe continue to cut down act 1, because let’s face it, act 2 really does deserve as much time as I can give it.