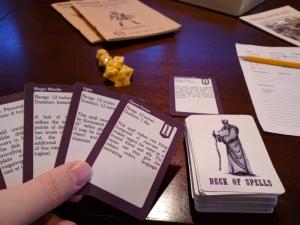 For a while now I’ve been using Delta’s OED rules when running D&D convention games.  As I’ve told some players who know me from past conventions, yes I used to run B/X but switched when a mutual friend asked Dan and I “what’s the difference between the versions of D&D you two run?”  After considerable thought, the best we could come up with was “the rulebook on the table.”  It turns out that though Dan started with OD&D and I started with B/X, we eventually house-ruled our respective games into pretty much the same exact thing.

OK, not exactly, there were two big changes Dan made that I hadn’t committed to yet: no clerics and one copy of each spell.  I really liked the one copy per spell thing though, and I could live without clerics, so I figured I’d give it a go running things Dan’s way.  So far I have not found any reason to go back.  And now I’m a full blown evangelist, even going so far as to hand out cards with some info about OED at my convention games: 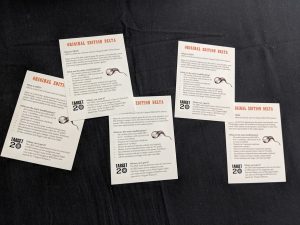 Now, Dan has published quit a bit about OED, and you can find a lot of info over at oedgames.com.  One of my favorite publications he made was his Book of Spells.  OD&D is kind of famous for it’s abbreviated spell descriptions, my personal favorite being the Haste and Slow spells:

Haste Spell: This is exactly the opposite of a Slow Spell in effect, but otherwise like it. Note that it will counter its opposite and vice-versa.

Um, thanks?  Nice to know all about the range and duration, but maybe a few words on what it does might help?  Well, Dan spent a bunch of time going through every spell in the game and cleaning it up, making it far more playable while still keeping the descriptions nice and short — a couple lines each.  You want more detail, go take a search through Dan’s blog for the word Spells, there’s plenty to read, I’m not about to summarize it all here.

Anyway, as we played I started to realize that the combination of short descriptions and only being allowed to memorize each spell once meant that you could represent a wizard’s spell book with a deck of cards.  Then you could memorize spells by pulling out the cards you want into a hand.  Cast a spell on an ally?  Just pass them the card and they have an instant reference.  It seemed like a very natural fit.

So after a little research I ended up on The Game Crafter and mocked up some cards.  I printed a couple copies just for a lark for me and Dan.  We used them at HelgaCon, and they were a hit.  Since then I’ve used them at every convention where I’ve run OED games.  Dan encouraged me to make them publicly available, and though I was initially a little hesitant (I didn’t want to profit off of what was clearly just a reformatting of his original work), eventually he convinced me.

I’ve been using them for a while now and continue to love using them, and I realized I never really posted about it, so here it is.  If you’d like your own copy, head on over to The Game Crafter and grab a copy. 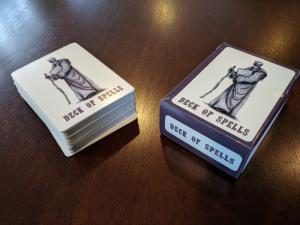