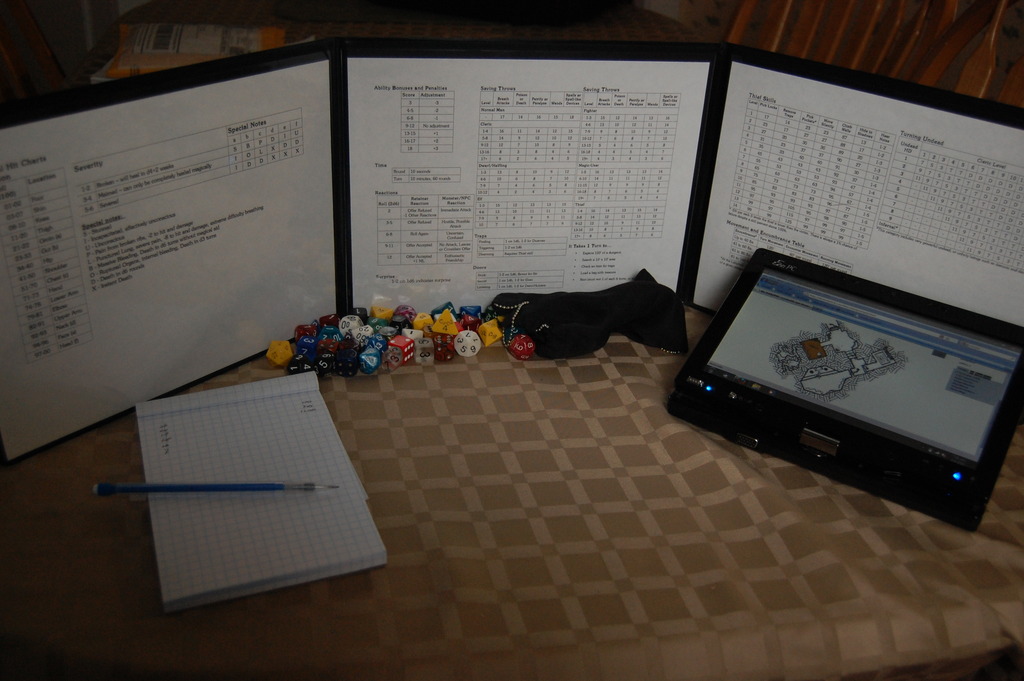 “Why do you GM?” I believe I was asked this question at least once at a convention during an after-hours party. The question was asked with real sincerity, I believe from the vantage of a person who enjoys being a player in roleplaying games, appreciates the effort GMs put in, but simply could not fathom what we in turn got out of the experience. Were we who GM games some kind of bizarre selfless martyrs devoting hours of our time in the name of other people’s entertainment? It’s a really interesting question, and for some reason today I find myself exploring my answers in a bit more depth than they originally got when first shouted across a crowded hotel room through a boozy haze. Why do I GM?

When I was about to graduate from high school and went touring potential colleges, I looked for two things: an active theater community and a strong creative writing program. By the time I started college I had drifted away from theater, and a few years after graduating I gave up writing fiction to fully commit myself to writing code. That said, the urge to create and perform never really left, and these days roleplaying is really the strongest outlet I have for both those impulses.

This kind of enjoyment in GMing is strongest for convention games, and especially the horror stuff I’ve done recently. I really do enjoy the creative challenge of writing convention content. There’s a really interesting balance to be struck there of trying to create enough material ahead of time to fill four hours of roleplay, while still leaving it all loosely tied together enough to allow for plenty of improvisation at the table. I love watching how a game is received by players, finding ways to improve, rewrite, and experiment again. Taking a scientific approach to a subjective quality like “fun” is really fascinating, and honestly kind of mimics what I do during the week for my regular job.

The creative process aside, I also really enjoy the performance aspect of it as well. I love seeing those moments of shared enjoyment around the table, knowing that I evoked an emotional response from my players. It’s very much the same as being on stage, in fact more so because it’s such a smaller group and I’m interacting directly with them. It’s like acting and talking with friends about acting all at the same time.

For weekly campaign games, I find the performance aspect almost completely falls away. In fact, if I feel like I have to do a lot of preparation and really perform for my players during a campaign game I’ll quickly get dissatisfied with the game. I recognize that my creativity comes and goes in waves, in unpredictable patterns, and expecting it to be ready every single week is a gaurantee for disappointment.

I think this is why for weekly games I prefer lighter, more “beer and pretzel” style of play. I like playing systems where I know the rules thoroughly in and out, so I don’t have to think very hard about the mechanics of play. I use a lot of other people’s material, in addition to some of my own, and I enjoy weaving a cohesive tapestry from these disparate pieces. For me a lot of the fun is combining the written text before me and the input of the players and trying to figure out how to reconcile these into some kind of sensible narrative. I like roleplaying the bad guys, and trying to come up with sensible tactics based on their motiviations and the actions of the players.

I prefer very light to no prep games for long running campaigns. I try to remind myself that I’m sitting down to play a game with friends, not take a test or prove that I’m the best GM to walk the earth. While my role in the game is different from the other players, I think I am still as much a player of the game as they are, and should be having as much fun with it as they are. Just because I’m not controlling one of the protagonists doesn’t mean I can’t take as much delight in their successes and their foibles.

Getting Together with Friends

Pretty much every lasting friendship I’ve made has had some kind of tie to gaming. The people I sat down to roleplay with at my first game in college would be the closest friends I would have for my remaining four years there. Friends that have drifted to distant corners of the globe somehow still find time to meet up at a convention or other gaming event. Would we still find a reason to hang out if we didn’t have the excuse of needing 3-6 other people to pull off a game? I’m not sure.

I joke that 50% of roleplaying is made up of reminiscing about past roleplaying. Maybe not quite that proportion, but seriously, can you remember a game where the players didn’t at some point go off on a complete tangent that started with “Remember that time we…”? Roleplaying has this wonderfully quality of requiring a reasonably sized group of friends to get together at regular intervals. Though perhaps there’s a little chicken and egg to that kind of sentiment – do we hang out with friends because we want to roleplay, or do we roleplay because we want to hang out with friends?

OK, sorry if I got a little maudlin there at the end. What can I say, I’m a big softy. Now roll for initiative.