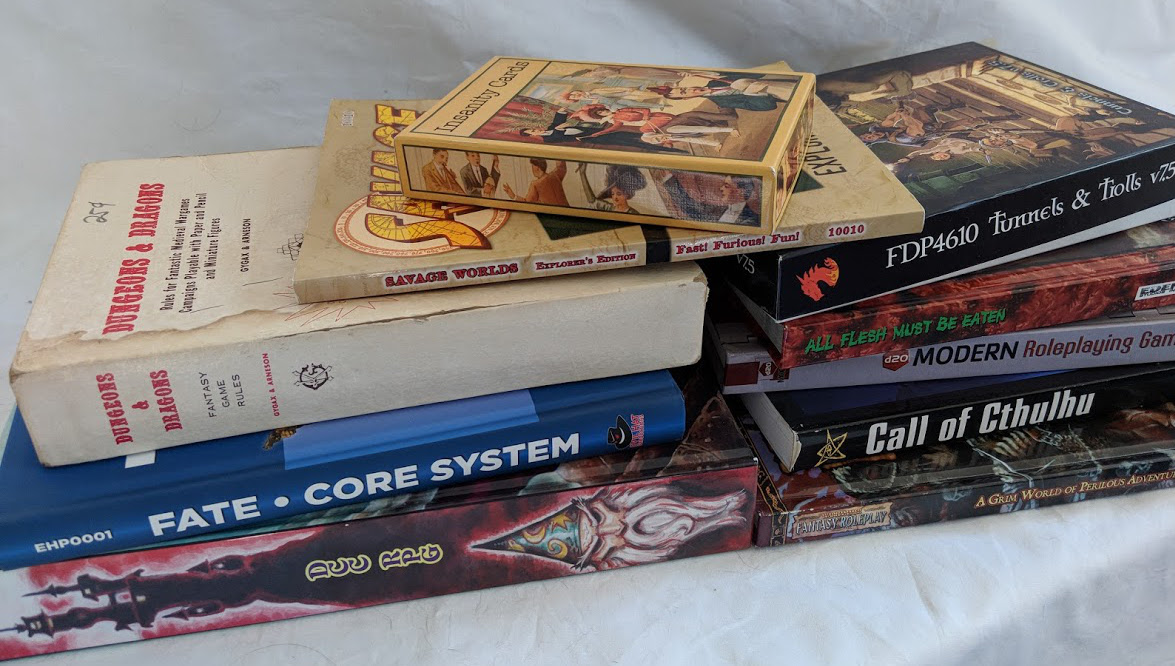 So, you’re interested in Insanity Cards, but not sure how to use them in your favorite RPG, eh? For many RPGs it’s really as simple as following the instructions that come with the cards (free download here).  This of course assumes either the system you’re using has no insanity mechanic, or that you’re completely replacing the existing mechanic with the cards.  But for those systems that already have a mechanic, let’s dig into the details of how to use the cards in a complementary way.

Note, when approaching healing or recovery, I often recommend “discard a card in play”.  What I’m talking about here is to remove one descent from an existing insanity, effectively reducing the effect (say from a level 3 Delusion to a level 2 Delusion), or even discarding the Tell if it has no Descents.

OK, let’s talk about the 500 pound gorilla of the RPG world, D&D. Actually, there’s not much to say – Insanity Cards work great as written with any edition of D&D, be it an old school edition like OD&D or 1st Edition AD&D, or the latest 5th Edition rules.

For healing insanities in 5th edition D&D, I’d suggest allowing a Lesser Restoration spell remove a single descent card, and a Greater Restoration spell remove an entire stack, regardless of how many descents are there. You may also want to allow the spell Calm Emotions to suppress all insanities (ignore all effects) for the duration of the spell.

You can also work Insanity Cards into other parts of the game that reference insanity. For example, if your Wizard fails his save when casting Contact Other Plane, have them draw a card and immediately bring the insanity drawn to level 4 or 5 (depending on how severe you want the effect – level 5 can sometimes be incredibly disruptive to your game). As Contact Other Plane already notes, you can cure this with a Greater Restoration, which fits perfectly with my suggestions on curing insanities above.

I run most of my horror RPGs these days using Savage Worlds.  These are primarily one-shot games where I completely replace the existing fear mechanic with the cards.  I trim out some rules that I think don’t mesh well with horror games – I eliminate the soak roll, bennies, and the shaken status.  I also drop the Guts skill in favor of just drawing cards.  I know that’s a lot.  Basically I’m using Savage Worlds just for skills and attributes, plus a very quick miniature-less combat that is pretty darn deadly without all those saving elements I ripped out like soaking and shaken.  This fits well with my style of game – about half the game is investigation with few physical threats, then the latter half the game quickly devolves into death and mayhem.

But let’s assume you want to run an ongoing campaign and use the cards.  I would leave the Fear rules as is, and just replace the Fear Effects table with the cards.  Any failed Guts check from Fear is worth a card, any failed Terror check or a natural 1 on a Guts roll is maybe worth 2 or 3 cards.

I would generally rule any 1-2 point insanity as a minor hinderance, and any 3+ insanity as a major hinderance.  If you wanted to let players start with one of these during character creation, I might say draw and play 2 cards as a minor hinderance, or 5 cards for a major.  I would also probably allow players to discard 2 cars from play for an advance, assuming you want the ability to heal insanity.  Depending on the setting, that may require time spent at an asylum or in therapy as well.

Chaosium’s Call of Cthulhu is a little harder, as it already has a pretty complex insanity system.  To be honest, this is actually a turn off for me with this system, so I’d really be inclined to ditch all that complexity and just use the cards.  But again if you’re pacing out an ongoing campaign, I think you could do something simple like map 5 insanity damage to a card.  Basically, for every 5 points of sanity you lose draw a card, and for every 5 sanity you gain you can discard a card in play.

I don’t know if anyone still plays d20 Modern, but I actually think it’s a great fit for horror games in non-fantasy settings.  It doesn’t have an insanity mechanic to speak of, so just use the Insanity Cards Rules as written.  Easy.

Note in the rules 5 points of insanity damage are ignorable, and once you hit 6 you have to make checks or suffer the effects.  This scales perfectly with the cards – you could play 6 Tells with no effects before having to start suffering.

Now, the cards you’ll find do smooth out insanity a bit.  In WFRPG insanity points build up until you crack.  With the cards you slowly descend, starting with behaving slightly odd and eventually leading to complete madness.  Actually, I rather prefer the latter, but if you wanted the emulate the former you could try this alternative:

Record insanity points on your character sheet as normal, and start making willpower tests once reach 6 points.  If you fail the test, lose 6 insanity points, and draw and play 6 cards.

So it’s still a 1-for-1, but you get that cliff effect Warhammer FRPG has.  Still, I think I’d prefer just doling out cards and not record the points at all.  And of course, for any of the insanity healing, follow the rules as written in the book, and for every point healed the player can discard a card in play.

Interestingly, Warhammer 4th Edition removed the insanity mechanic, or at least combined it with corruption. Bringing insanity back as a separate mechanic using Insanity Cards is thus pretty simple (and satisfying!) You can do this by simply ignoring the rule on rolling for Body vs. Mind corruption. Assume all corruption is Body and go straight to the Physical Corruption table. Use Insanity Cards for mental breakdown with the Insanity Cards rules as written.

The only conflict this may cause is trying to figure out when to award an insanity card vs. a corruption point. The general rule of thumb is this: is it steeped with mutating chaos power (eg. warpstone)? That’s corruption. Are you witnessing things a normal person should never see? That’s insanity? Is it something that combines the two, like watching a horde of chaos demons wipe out all your closest friends and relatives? Why not both?

Dread is a great horror game, and I adore the reflected tension of the tower.  I think working Insanity Cards into a Dread game is not too hard.  You could simply layer the cards on top with no direct interaction with the tower.

Alternately, any time the character witnesses something terrifying, tell the player how many cards they must draw, and allow them to reduce the number of cards with a tower pull on a one-for-one basis.  If they knock the tower over during this, they must draw the original number of cards specified.  Maybe in that case also add the extra penalty of limiting the number of Tells they’re allowed to play to one or even zero (assuming they have some Tells in play already).

Fate is another game where I’d be pretty close to just using the cards as is.  One obvious addition is to simply consider any face up Insanity Card as an aspect of that character.

Or, rather than just using the card itself as an aspect, you could use the bolded title of each level of insanity as an aspect.  Thus, a player with level 3 Paranoia would have the additional aspects of What Was That?, My Things!, and Not Sure About That Guy.

There are plenty of other systems out there that you could drop Insanity Cards into without requiring any additional thought.  Most RPGs that don’t have an insanity mechanic you don’t really need to worry about – just layer the cards on top of the existing system.

If you have an interesting one that needs a little more effort, or have other ideas for how to incorporate Insanity Cards into existing RPG systems, I’d love to hear your thoughts.