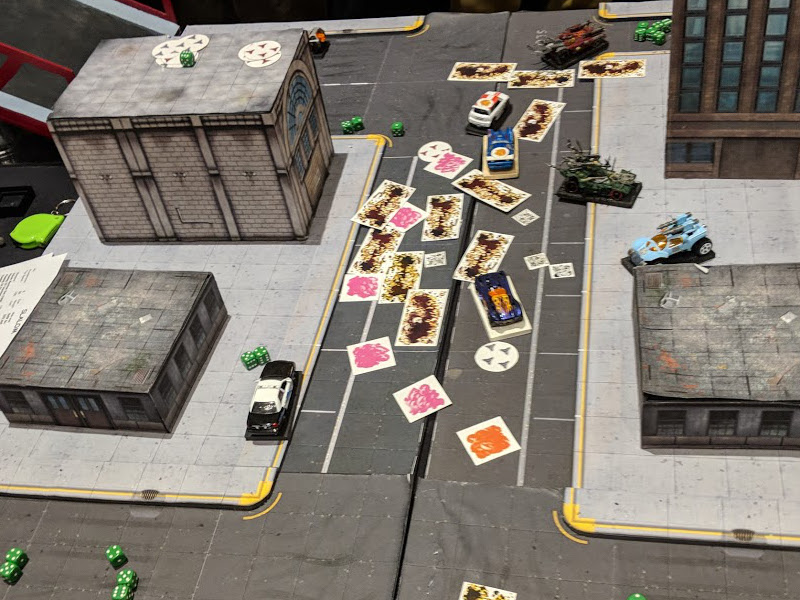 I signed up to run a lot of stuff this TotalCon, but despite that I actually got to play in a couple games as well.  Actually, due to the Curse of Outdoor Spoliation I got to play in one more than anticipated.  So without further ado, here’s what I got to experience as a player at TotalCon 32:

Astonishing Swordsmen and Sorcerers of Hyperboria

I knew very little about this system sitting down to the table, but I’m a huge Conan fan and I’ve seen it lurking about at various conventions for a while now.  Much like Dungeon Crawl Classics, it appears to be a spin on classic D&D, and also comes in a similar giant book about the size and heft of a cinder block.  I’m told that also like DCC it’s mostly tables, but I couldn’t be bothered with that, I was here to kill vile magicians and plunder untold wealth!

I got to play as Kor the Slayer, a very archetypical barbarian, which I was super surprised nobody else took and I’m pretty sure 4-5 players had already selected characters by the time I got the stack.  I enjoyed playing into every trope, and I apologize to the other players who lost out on magic items when I insisted on immediate destruction of any implements of vile sorcery.  I also enjoyed the meta-level of this particular adventure as clearly being some weird sci-fi infusion, with enemies carrying what must have been lazar blasters, but I wasn’t phased.  Obviously it was evil magic!

While the game was pretty fun, I didn’t feel like the system brought enough to the table to warrant such a massive book.  I could have just as easily run a game like this using straight OD&D, disallowing non-human races, and applying a Conan setting.  Actually, that sounds super fun, I may have to do that some day.

Never heard of this game before, though I understand it’s been around for quite a while.  But I did know the GM, who is awesome, and this was my drop-in replacement for my failed Outdoor Spoliation game.  The game was amazing, I’m sure due to the great group of players it attracted and the previously mentioned excellent GM.  It would have been easy to become bummed out by the failed game, so I was super happy to have such a stellar game to play instead.

I played a goblin pilot, and decided to talk in a crazy voice that was sure to make me horse by the next day.  I was the character nobody else picked, and I quickly realized I was the comic relief of the group.  Works for me.  The guy next to me was playing the ship’s engineer, and this man had an incredible skill at setting them for me to spike.  Really, every joke I was complimented on after the game I had to say “That was Phil’s idea, I was just building on it!”  And man, did the jokes roll.  It’s been a long time since I was completely disabled by peals of laughter like that at a table.  One of the players who was trying to be serious had to walk away from the table to collect herself and get back into character.

Yeah, I play this one every year, and every year it does not fail to disappoint. I always go in with the plan to die gloriously before the last hour so I can go watch the Rocky Horror Picture Show put on by the talented RKOArmy (and they had a nice big crowd this year made it even better).  The table is enormous, there’s tons of great looking terrain, and everyone is in a pretty raucous mood.  One younger player kept trying to adjust his strategy based on what I told him I was doing.  I finally said to him: “the problem with your strategy is, you seem to assume that I’m actually telling you the truth.”

So, three fun games, no stinkers.  All in all, it was an excellent convention and I look forward to next year!