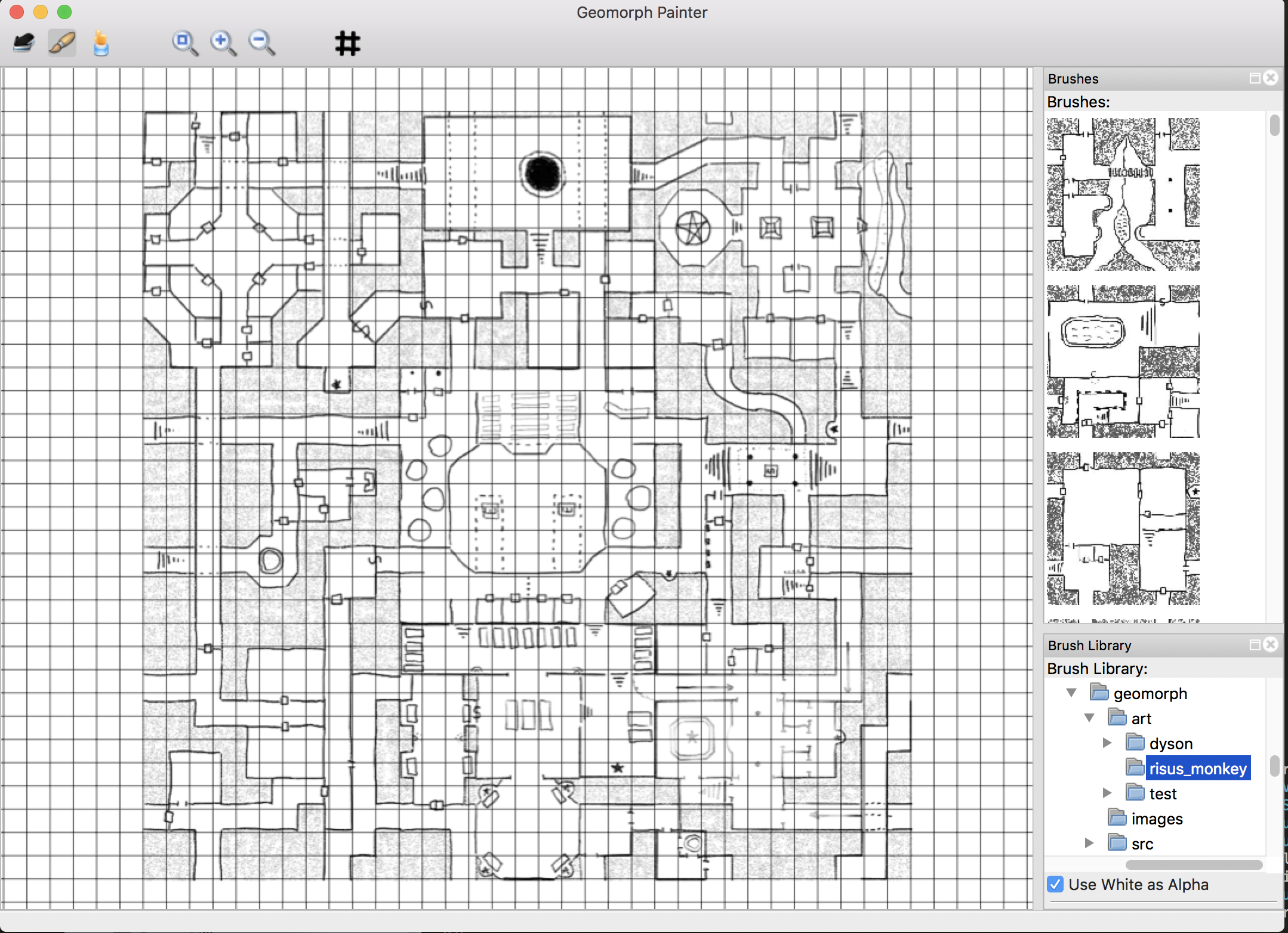 Continuing on from yesterday, I must now draw a map of the Vile Crypt of the Reawakened Sisterhood.  Wanting to continue to get as much randomness into this process as possible, I turned to my Geomorph Painter to slap some geomorphs together into a cohesive map.  And for the geomorphs themselves I felt like perhaps i was starting to overuse Dyson Logos’s work, so instead I grabbed some made by Tim Ballew.  Unfortunately it looks like his blog is dead, but I was able to use the wayback machine to find where he first posted them, and found this disclaimer:

All art and material in this PDF are copyright 2010 by Tim Ballew. Permission is granted for you to use this material for personal use only. Limited license is also provided to use these map geomorphs in non-commercial material such as blogs and free dungeons and other downloadable content as long as there is no charge for this content. You must credit me (Tim Ballew) with the creation of the geomorphs, along with a link to my blog (http://www.risusmonkey.com).

Again, unfortunately the required link appears to be dead, but I do think my little project here is in the clear for using his art, so thanks Tim!  On with the show.

I started by slapping together 9 random geomorphs into a grid, and then rotated them to be more pleasing.  Usually I’d do a smaller 2×2 grid, but I had the idea that I could start big and then edit down the image to remove the extra rooms and make the map feel a bit more cohesive.  Also, when the painter gave me a geomorph that was cavernous I hit the randomizer again.  Visually I’m still imagining this as quazi-Egyptian, and I like to imagine it as the interior of a pyramid or ziggurat or some such.

So here’s what it looked like in my geomorph painter with just the raw geomorphs: 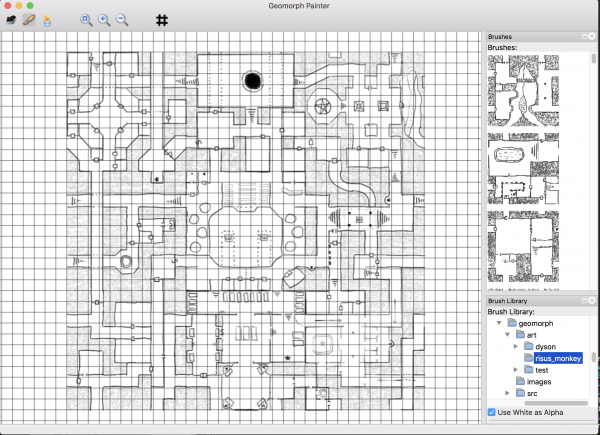 I exported the map without the grid to PNG, figuring I’d add a grid back in once I was done editing the layout. I then opened it in the Gimp and started erasing large blocks, and closing up walls that lead to nowhere.  Now it was starting to look like the interior of a tomb. 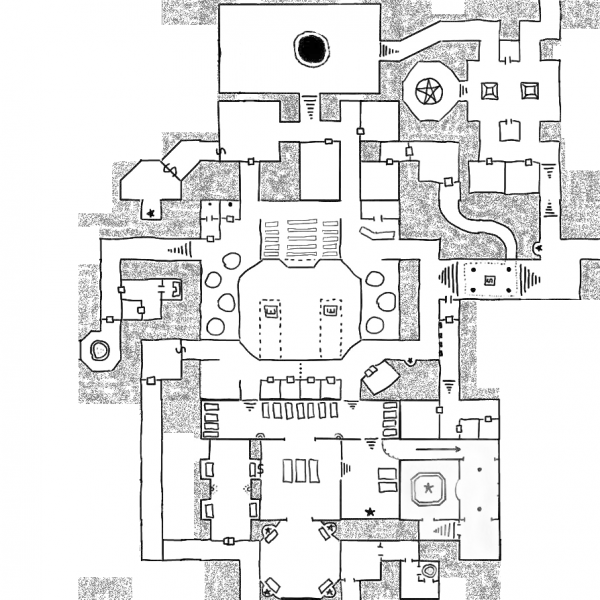 Fortunately Tim used a fairly easy to replicate fill pattern for his dead space, so filling in those big empty white blocks was not difficult.  Once that was done I continued fixing blemishes, and then started numbering rooms.  It looked like my entrance is in the upper right, so I started there and numbered as I scrolled about trying to keep rooms ordered based on a path a party may actually encounter them. 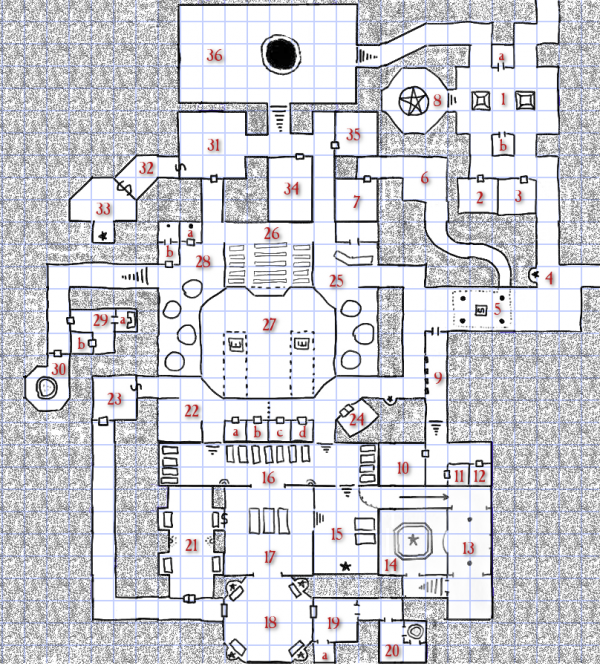 While doing this I was also able to clean up a little more, removing some extra stairs or doors where it felt redundant and perhaps would be difficult to describe to the players.  You can see in room 5 I removed the stairs around the trap door into the room below.  I noticed the tunnel leading off this lead to a dead end, so rooms 6 and 7 could be a floor below and there’s no consistency problem, and I think the trap will work better without the extra tell of being surrounded by stairs.

Some times for small rooms you can see I put letters instead of unique numbers.  No, I have no idea why these small rooms are considered part of the larger room, it just made sense while I was numbering.  I’ll figure out why when I stock the dungeon.  There are lot of other odd things I’m not sure about, like what exactly is going on with the sloping passage to 13?  Is that a wall to the left of it?  And what are the underground passages in 27?  I have no idea, again, I’m happy to figure this out as I stock the dungeon.  I don’t really care what the artist had in mind when he drew it, I will interpret what I see to make sense as I put things into the rooms.

Hmm, looking at this I see there’s a level inconsistency with the stairs leading down from 22 to 16.  I could reason that the whole southern part of the map is sunken, and I kind of like that 13-15 sink even lower, but the passage from 18 to 23 that leads back into 22 breaks this, probably because I linked some tunnels that weren’t previously linked.  Hmm, maybe 23 has a super tall ceiling, and the secret door is actually 15 feet up the wall of that room?  That would be pretty cool actually.

Cool, I think I’ll leave that inconsistency to be resolved as I fill the dungeon.  But that’s for another day.