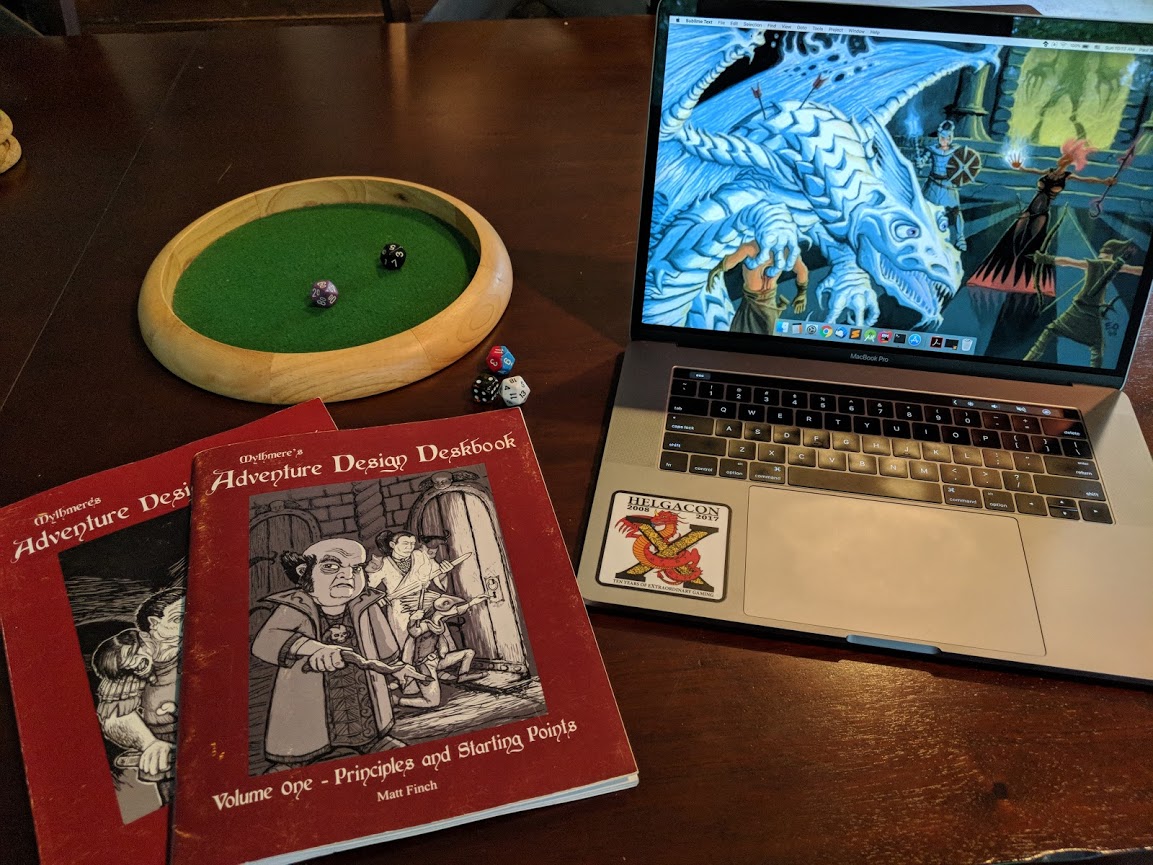 Inspired by my previous post on interpreting random tables, I thought it might be fun to spend a little of this lazy long weekend sitting down to build a dungeon out of various random components.  So I sat down with my copy of Matt Finch’s Adventure Design Deskbook, some dice, and my Geomorph Painter and got to work.  I thought I’d start with some high level themes generated from the Deskbook, then draw up a map, and then come back to tables to fill it in.

Finch begins his series with a four-part name generator for the “Location” of your adventure, so I started rolling.  My first roll was a 95 – “Vile”, off to a good start.  My next roll was 29 – “Craters of the”, which struck me as a little odd as craters always make me think of the moon and I’m not crazy about adding scifi elements, but then right below it I saw 30 – “Crypt of the”, and I liked the sound of “Vile Crypt of the…” so I wrote that down.  My third roll was 76 – “Reawakened”, ok, starting to sound kind of undead-ish perhaps?  Finally I hit a rut, my last words got several awkward sounding nouns until finally I landed on a good one: 84 – Sisterhood.  “Vile Crypt of the Reawakened Sisterhood”, yeah, that sounds great.

Volume 1 next dives into missions – what is it exactly the players are being asked to do?  But I prefer to skip over to volume 2 “Monsters”, which is all about generating interesting villains.  I’d rather know who the bad guys are and what they are up to first rather than think about why the players are being sent off to deal with them.

The villain tables start with broad categories, and my first two results of “Verminous” and “Mist Creature” I feel don’t really work with my title.  To me a “sisterhood” sounds like I need more intelligent bad guys, not giant rats or spooky paranormal phenomena.  The third roll gave me the fairly generic “humanoid” and so I decided to see where that takes me, figuring I could always come back if it’s not interesting enough.

Humanoid apparently assumes an animal-human hybrid, and the tables had me roll for what kind of human and what kind of animal characteristics my creatures might have.  I got “dog” for the animal, and the humanistic part tells me that they have “arms and thumbs”.  Sounds a bit like a gnolls.  Next the tables had me roll for an extra descriptive element and I decided to roll twice and pick the more interesting.  My first roll says they have “alliance with related beast-type”, which sounds like they have dogs or wolves or something, and the second one is a roll on the “minor special defense” table, which gave me “turns incorporeal”.

Hm, they’re like ghosts?  Or maybe like displacer beasts?  Oh, that sounds really cool, what if they’re like a humanoid displacer beast?  I like that a lot, and I think I’m likely to hang onto both results here.  I’m imagining encounters with a creature that looks like a gnoll with tentacles coming out of its back and leading a pack of displacer beasts on leashes.  That sounds super cool.

The last table for the racial overview of my bad guys has me roll for their relationship with other races and I get “aloof and isolated”.  Given that this is a crypt, I’m starting to imagine a sort of Egyptian theme.  The creatures reside mummy-like in their tomb, relying on their trained displacer beasts to go out and hunt for them.  Cool, but let’s not get too far ahead of ourselves, the tables still have more to tell me about the motivations of my bad guys.

Yeah, now I’m definitely digging on the idea of these forgotten creatures residing in their tomb, occasionally sending out foraging parties to bring back “food”.  I put food in quotes because, you know, obviously they eat people in some way.  With this mind I turned back to the first volume.  I skipped past missions which describe the player’s motivations and on to the section labelled “The Villain’s Plan”.  Tell me, oh prophetic dice, what are these horrible creatures up to?

Before rolling I visually scanned the first table of broad categories to see if any stood out given what I already know.  Concealment sounded good if I want them trying to remain hidden in their crypt, or Food given what I was just thinking them eating people.  When I flipped to the Concealment section I was delighted to see the text start with “The table is primarily for intelligent mastermind-types; if you’ve already got an unintelligent monster in mind, assume that it’s building a hidden lair of some sort or roll on the Food-Related Activities table.”  While I do think my bad guys are intelligent, there was a whole section about “masterminds” under humanoids that I did not reach, and I was already thinking about the Food tables as my second choice, so I let the whim take and flipped over to the Food tables.  I figured if the results were too bestial, I could come back to the Concealment table.  And sure enough, my first roll on the Food table gave me exactly what I wanted:

The villain/monster feeds on people in a way that leaves them alive for future feedings, but not directly.  In addition, the villain must process the vital essences before eating them.  The “processing” is an extra step in the cycle.

This sounds perfect.  Now I’m imagining some kind of ancient cult that worshipped these be-tentacled, dog-headed women (it is a sisterhood after all) and fed them human sacrifice.  Perhaps they feed on the minds or souls of these sacrifices, turning them into mindless slaves to serve them and prepare their future meals for them.  Eventually the cult was eradicated, but this tomb lay forgotten and dormant, until recently.  What “reawakened” these horrors?  I’m not sure yet, but they’re active again and people in nearby villages are starting to go missing, and it’s up to the players to figure it out.

OK, that’s a great beginning.  Next step – draw a map!