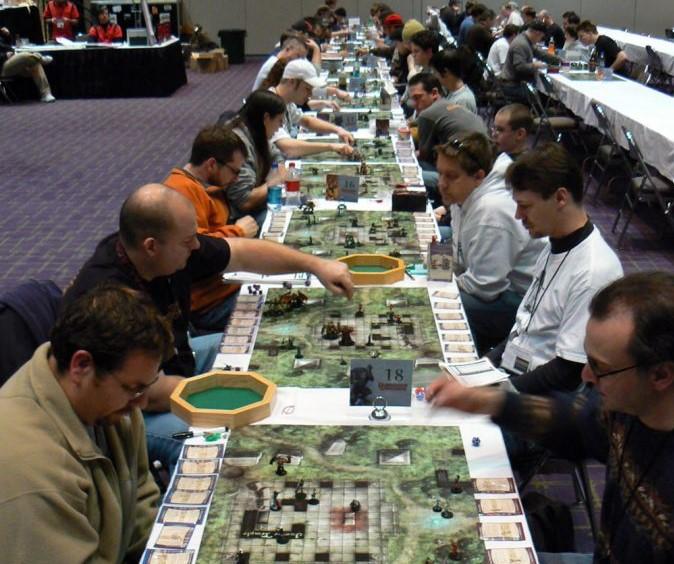 I keep seeing headlines in my news feed regarding D&D as an eSport.  While I admit that my knee-jerk reaction is to roll my eyes, I do find it an interesting extension of the long history the game has had in competitive formats.  So I decided to do a little digging and find out what exactly is going on.  Turns out, it looks to be a combination of coincidence and bad reporting.

The headlines I see most frequently say something like Hasbro’s CEO Thinks Dungeons & Dragons Has a Future in ESports.  There are several similar articles and they tend to reference each other, so finding the original source is a bit difficult.  They all include a fairly out of context quote from Brian Goldner, CEO of Hasbro, about something being “ripe for esport competition” but it’s unclear if he’s talking about D&D, Magic the Gathering, or both.  I eventually found an article debunking the whole quote, or at least claiming that it’s being confused with general marketing strategy talk around streaming and digital / online play.

Muddying the waters even more is RPGSports.tv, a site that is promoting something that smells very much like D&D as an eSport.  In their own words:

RPGSports is the first online D&D Tournament in a cooperative Party vs Party setting from EncounterRoleplay & D&DBeyond with a grand prize of $5,000. Over the course of 4 weeks, 16 players will compete in teams of 4 in single elimination games. Each game is a best of 3 arena battle and played via Roll20.

They also make it pretty clear that they are in no way affiliated with Wizards of the Coast.  Are they trying to capitalize on the buzz going around from the confusing reporting on the interview with Goldner, or is it just a very strange coincidence in timing?  I can’t say.  I can say that as weird as I find the idea of culling D&D down to just a system for team vs. team competitive combat, it’s not exactly new.  The photo included at the top of this post is of players playing the D&D Miniatures Game, which is basically the same thing, just without the audience.

And of course, D&D tournaments were a thing for many years, and started very soon after the advent of the game itself.  In fact, I’ve written quite a few blog posts about the early tournament scene and reviews of various tournament modules, all of which can be found on this site under the keyword Tournaments.

The earlier tournaments were run as typical D&D games with some kind of scoring system around objectives the adventure presented.  Many teams played the same adventure, and the teams with the highest scores advanced into later rounds to do it all again until one team was declared champion.  My own experience in D&D tournaments at GenCon in the early 90’s were that the scoring was done by the individual, with the best player from each group being selected to join a table of other winners, who played as a new group to compete with each other for some kind of grand prize or title.  Honestly back then  I thought the real prize was simply getting to play in the later rounds with players that were deemed “the best”.  Having now played and run some of the earlier team based tournament games, I think that’s actually more fun and a better fit for a cooperative game like D&D.

Finally, let us not forget Iron GM.  I’ve actually never played or even seen an Iron GM game, though they are often run at conventions I attend.  In this game the players are more like the judges of the tournament and it’s the GMs that are competing.  GMs are challenged to improvise a game on the spot with select thematic elements, and then scored by their players.  The winner usually gets a free trip to GenCon to complete in the championship and win yet more prizes.  I actually love the idea of this — the only thing that’s kept me away is the required use of D&D 3.5.

So, D&D as an eSport?  Given the fact that D&D as a form of passive entertainment is already catching on with live streaming, and has a long history of tournament play, I could definitely see it.  In their own defense on RPGSports.tv they say “there is no wrong to play D&D, as long as you are having fun.”  Very true, though also interesting that they felt the need to include a defense at all.  I’m not sure I agree that RPGSport’s take is really hitting the best notes of what makes RPGs interesting, but nor do I think this is the only attempt we’ll see.  I’ll be curious to see if it takes, or if Wizards enters the arena officially, or if someone comes up with yet another variant.  And of course none of that will stop me from running my own games just the way I like.