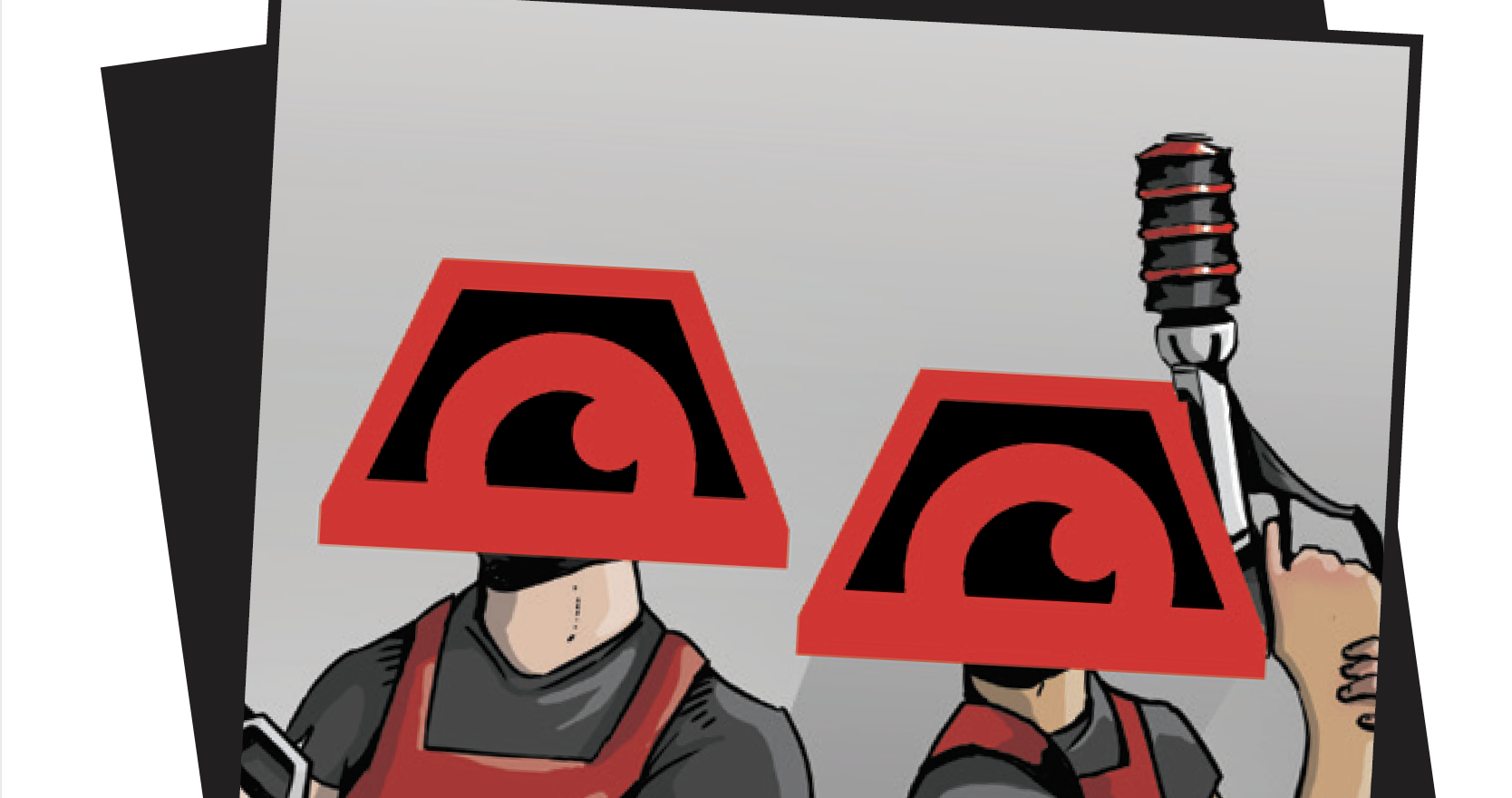 I just got done running my first test game of the Paranoia adventure I’ll be running at Carnage on the Mountain.  Many thanks to my test players – I hope you guys had some fun.  It was super helpful for me in both evaluating the content I had written, and getting some experience running the new edition of the rules.  Here’s a random collection of thoughts while they’re still fresh.

Edition Name – This is pretty minor, but I’m finding it awkward to keep writing “the new edition”.  Honestly, I’m not totally sure what to call the thing.  The original kickstarter seemed to imply it might be called “Rebooted”, though it’s not totally forthright on that.  On DriveThruRPG it’s called Red Clearance Edition, but I can’t find that title in any of the books themselves.  Finally, I’ve seen some online reviews call it simply the “Kickstarter Edition.”  Below I’ll use “Rebooted” for convenience.

Quantity of Content – As usual my fear that I’ve not written enough content to fill four hours was painfully wrong, and we ended up barely reaching the end in time.  That’s really saying something given that the content I wrote is really just about two pages of very sketchy notes.  This actually makes me super happy — I’m glad to see my take on the rules as a vehicle for improvisation was pretty much right on.  I don’t think I need any major edits to my scanty notes for the next run.

Character Creation – For the first time I think I did not regret doing character creation in a convention style game.  I was pretty open with the players about this being a test and I made sure to ask them explicitly at the end if they felt it should be removed from the final game.  There was some discussion of pros and cons, but overall I got the feeling that it did in fact add to the experience rather than detract.  Getting players into the mood of having little rivalries and betrayals right off the bat during character creation I think really helps set the tone for the rest of the game, and it’s worth the 30 or so minutes of game time it takes up.  I think at Carnage I’ll keep it and see how it goes.

Combat Actions – Rebooted has a fairly complex system for player actions and turn order that uses a special deck of cards.  Each card serves double duty – containing both a number for turn order and a special ability.  Players choose cards in private and then can decide when their number comes up to play the card or to keep it and take a basic action, essentially having used the card only for the turn order number.  In addition there’s a whole system for bluffing about the actual value of the turn order number and calling each other out on said bluffs.

In practice I found this actually slowed combat a fair amount.  Players rarely used the cards solely for turn order and instead spent a fair amount of time trying to warp their actions to make use of the special effects.  They weren’t comfortable with the bluffing system until pretty late in the game, which is probably pretty natural for folks new to the system.  I can imagine that players familiar with the game may find the additional complexity quite fun, but I also think most players I’ll play with will be newbies, so I’m tempted to scrap it.  Instead, I may opt for just going around the table.  I think I can still deal the players cards, and then just let them use the cards for the extra effects as they see fit, totally separate from the normal process of taking turns.

NPC Actions – The GM book spends a lot of time assuring the reader that as GM you should be comfortable not rolling any dice.  But when it came to actual fights I found it awkward trying to remember to make players roll something to avoid damage.  I think this is actually just my fault in not really running it correctly – I would interpret the player’s action independently of NPC’s and then feel like I had to make them do a separate defensive action lest the NPCs be totally ineffectual.  For example, if the player shot at some enemies I would take their roll to be either success or failure at doing so – success did damage, failure did nothing.  Then I’d also make them make a roll to avoid getting shot themselves, when I remembered it.

I think the better method is illustrated in this example from the GM book:

Use this as a rough guide – for every point the player missed their required score by, inflict around one level of damage (give or take. Play it by ear as you go). So maybe a Troubleshooter is shooting at an armoured terrorist mutant traitor – you determine that they need a score of 2 to hit and their score is 0. That’s two levels off the required amount, so you say:

‘You open fire but the mutant’s armour deflects your blast – and they return fire, hitting you in the leg! You’re Injured.’

In the same situation, say they roll a score of 1:

‘You line up a shot that clips the mutant in the shoulder – but as the blast hits them, their finger spasms on the trigger and sprays a burst at you, inflicting a burn all down your right arm! You’re Hurt.’

While this example is great about rolling player action and NPC action into a single roll of the dice, I think there’s an equally important bit in there about setting the target number of successes.  Sure, the book very much encourages quick arbitrary choices for such things, but I also think it could come from the quick stats you come up with for the NPC.  For example, take a look at this sample NPC: 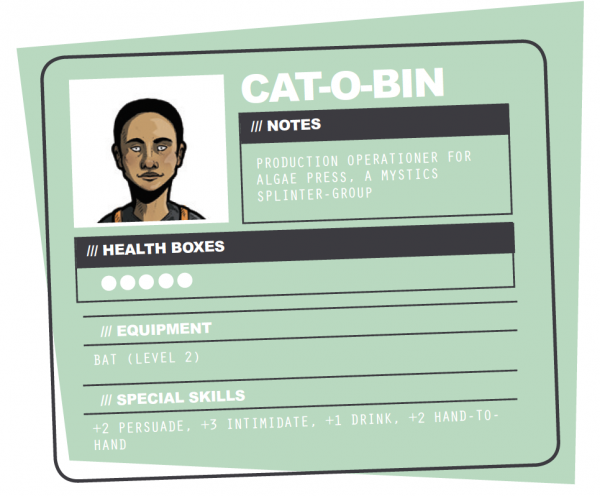 What exactly does +2 hand-to-hand mean if the GM isn’t meant to roll dice?  Well, it must be a modifier to the number of successes required by the players when fighting him in hand to hand combat.  In fact there’s a nice parity with the example written above where the players need 2 successes to shoot at the armored terrorist mutant traitor.  I’d imagine that the stats for that NPC might include something like “+2 vs. laser fire due to heavy armor” or some such.

NODE Modifiers – I thought there were cases (wounds in particular) where modifiers affected the number of successes after rolling rather than just affecting the number of dice rolled.  Though of course, this is exactly what NODE stands for – Number Of DicE.  And in practice, if felt like applying the modifier to number of successes after the fact was just entirely too punishing.  So, whoops, my bad – in future I’ll make sure all modifiers apply directly to the NODE before rolling.

Negative NODE – For some reason I read the rules as stating that if either your stat or skill was negative, you added the numbers as if they were positive, but then subtract any dice that come up 1-4 from the total number of successes.  Re-reading the rules now I can’t find anything to support that.  It looks like instead you do the math as normal and if the final number of dice is a negative number, only then do you invert the number to roll that many dice and treat 1-4 as penalties to the number of successes.  Eg, if I had 2 Violence and -1 Guns, I’d add those together for a NODE of 1 and thus roll 1 die.  If I had 2 Violence and -5 Guns, then the total NODE is -3.  I would then roll 3 dice, and if I got a 5, 3, and 2 the 5 would count as a success but the 3 and 2 would subtract a success each, leaving me with -1 successes.  The book explains this in the text, but never gives a concrete example.  It sure would be nice if at least one of their examples actually walked through it.

Secret Societies – In the flow of my adventure I have a couple encounters where the players act a bit more cooperatively dealing with purely environmental challenges, and only later in the game are given strong reasons to undermine each other.  However, all the players seemed to agree that this is exactly when the game got good, and they thought some more incentive to go after each other earlier would make the game better.

I didn’t use the secret society cards in the game as I wanted to scale back a little in the complexity when introducing new players.  However, I suspect this is exactly what was missing.  I showed the players some of the cards and some really hit them as providing that incentive to betray each other they thought was missing.  Other of the society cards felt a bit out of left field, and the end result we agreed on was that simply stacking the deck with societies that played well with the specific content and then dealing them out would be a good addition to the game.

Wounds – I’m not sure if any of my players ever dealt with being maimed – we certainly had hurt and injured players, and often things jumped them straight to death.  I only realized after the fact that maimed is special and I’m encouraged to do particularly nasty things like take players limbs off when they hit that level.  A missed opportunity I suppose.  Also in the book as I was reviewing it was some nice encouragement to futz with the number of wounds enemies could take.  I was playing with the standard 4 for every enemy, but I think a larger number of enemies with 1 wound each might be a fun variation, and would be easy to mix into the game.

Treason – Despite feeling like I was doling out treason stars like candy (thank you computer die), the players thought more would have been better.  Again this can act as incentive to attack each other, since it’s basically any loyal clone’s duty to assassinate someone with 5 treason stars.  That should be relatively easy to ramp up – there were plenty of opportunity to hand out stars but I generally only ever gave one at a time, or 2 for big offenses.  I probably need to just ramp that up to 1-3 for base stuff and as many as 4 for the big ones.

I think that about wraps it up.  I’m actually looking forward to giving this another go at the convention with a new group to see how I can improve it.  As it was our first game was pretty fun, and I think with a few of the tweaks above I may be able to hit that high level of hilarity I’m hoping for from this game.