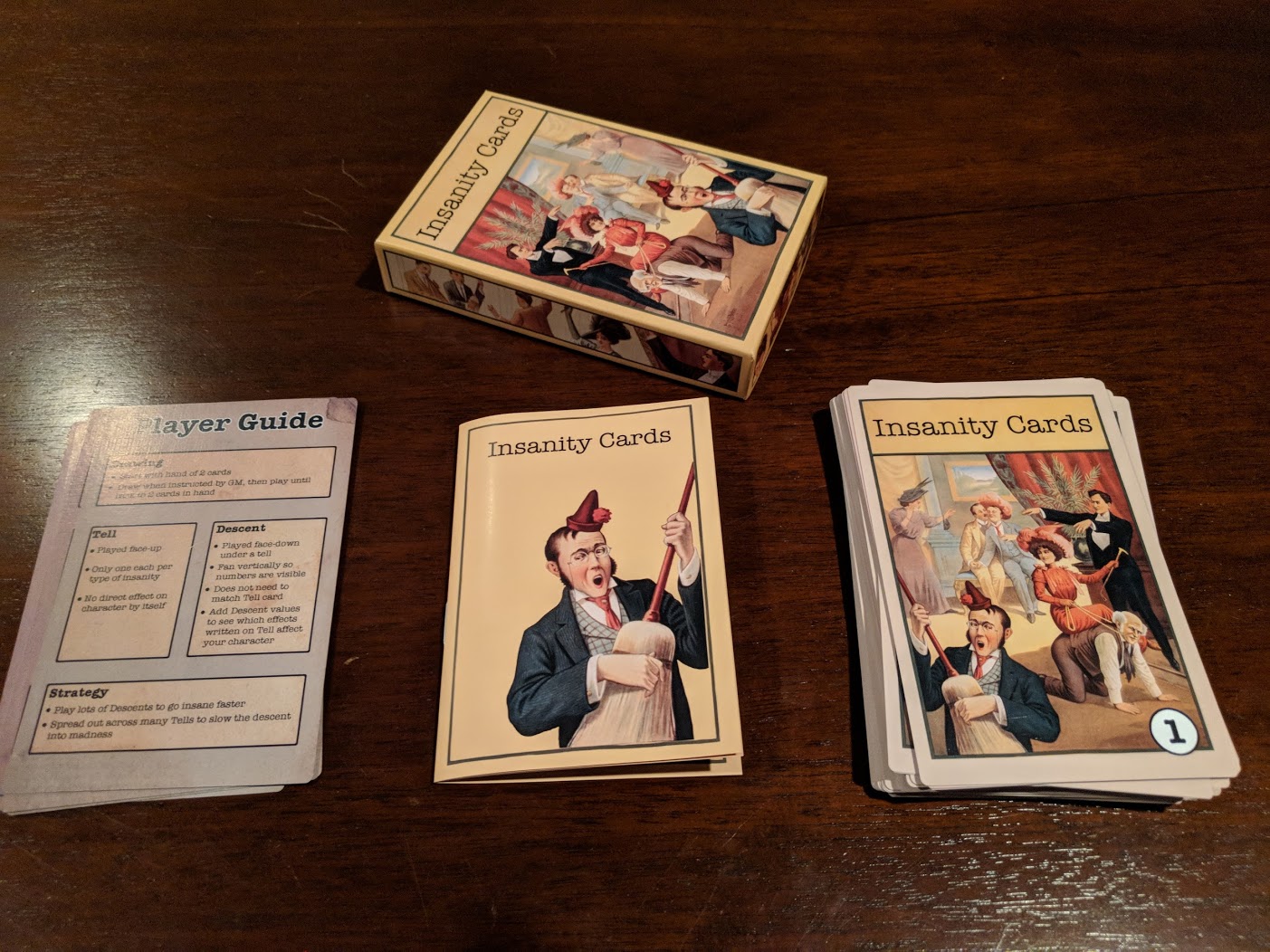 About a year ago I took Insanity Cards off of the market. I removed the print and play edition from DriveThruRPG and the various POD physical versions from GameCrafter. Every now and then I get a message from someone looking to buy a copy and wondering where they went. The answer I unfortunately have to give is that you simply can’t buy them anymore. However, fear not, the project is not completely dead. In fact, a new, bigger, better project is about to rise from its ashes…

I took the project down because I was becoming increasingly aware of the issue around the representation of mental health in roleplaying games. I noticed a lot of games were simply removing sanity mechanics entirely, like WFRP 4e or Fate of Cthulhu. Other games were simply turning a blind eye. It caused me to take a critical look at my own product and question what I had created.

Now I feel very conflicted about this, because it’s not really a cut and dry situation. So I did my research. I read a couple thoughtful forum posts. I listened to the Mythcreants Podcast episode on mental health. Someone recommended to me Black Armada’s game Lovecraftesque which includes some great essays, including this one published on their site about Mental Health and Lovecraft. I even paid for a consult with a sensitivity reader to look at my existing product. Unsurprisingly the result was mixed, there were good and bad elements to my own work.

A while back I wrote up my list of house rules for using Savage Worlds with Insanity Cards for horror games, dubbed “Paulthulhu”. I knew of at least two other GMs that wanted to run exactly what I was running, so I felt the desire to document it. In the end I was quite surprised to discover just how much I had changed the system. I was starting to wonder if I shouldn’t just write a custom system of my own to go with the cards.

That was in my head when I discussed with my sensitivity reader the current state of the cards. He had a very interesting suggestion for me – why not embrace the sensitivity angle straight on? Rather than trying to massage the wording of text to sidestep anything offensive, why not actually write a set of rules that start out with a direct goal of providing a mental stress mechanic that is respectful of real world mental health issues?

It just seems like the obvious right choice. Looking at the good and bad lists above, it feels like as far as the guts of the mechanics go I’m already pretty close. So this is what I’ve set out to do. I took down the existing products as a means of doing no further harm, and since then I’ve been writing. What I’m looking at now is a full book of rules for running horror games with a central mechanic that I now call “Mental Stress Cards”. I imagine the end product could even be a small boxed set, including the rule book, a deck of cards, and a sample adventure. My goal is to be play-testing it this summer, and hopefully have it up on kickstarter for production before the end of the year. I will later kick myself for publicly setting hard deadlines like this.

How Can I Help?

If any of you dear readers and fans out there have experience running games with the old product, I’d love to hear from you. Tell me about what worked and what didn’t with the old cards. Any anecdotes about things you want to be sure I don’t accidentally cut, or cases where the cards did open the door to uncomfortable situations would be greatly appreciated.

I also need a name for this thing – Paulthulhu will not do. The game is meant to focus on short-duration games, one-shots or a handful of sessions, that focus on the collapse and destruction of the player characters. I think the closest comparable is Fiasco, though I suspect my game will be a little more morbid and less wacky. So if you have any thoughts on a clever name for such a game, by all means suggest away!

And keep watching this space for updates! I hope to repurpose this blog for posting updates on the project as I work on it. So hopefully you’ll see more from me on this topic here in the very near future.

14 thoughts on “What Ever Happened To Insanity Cards?”