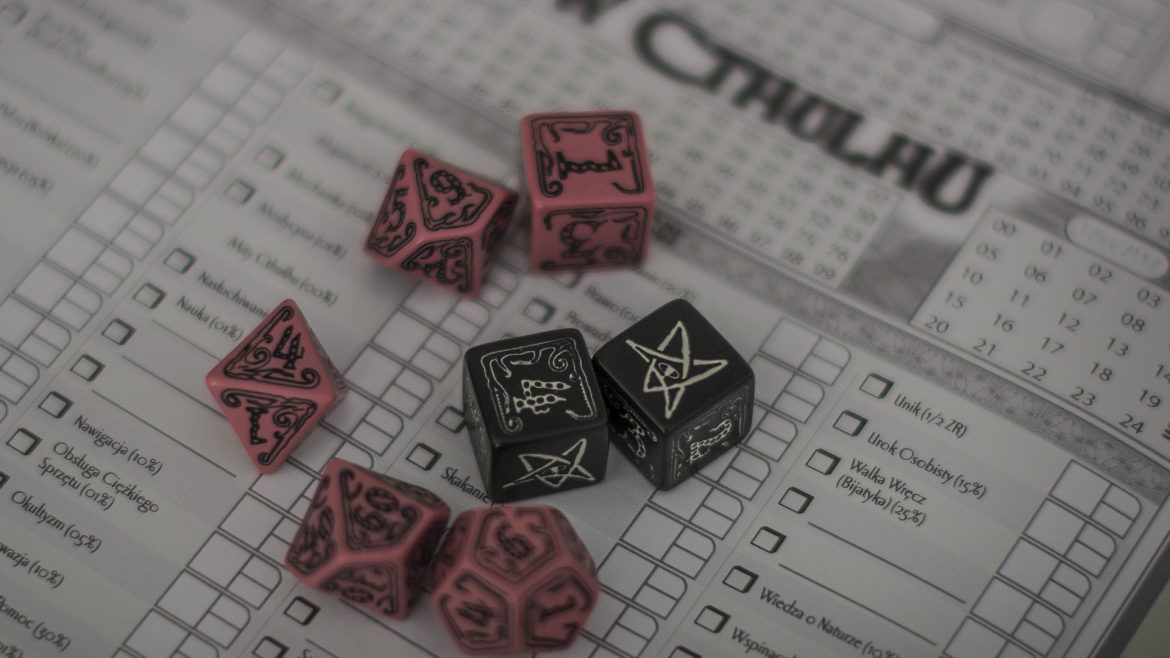 When I first developed Insanity Cards I really wanted to run games in modern or historical settings and needed some bare-bones system to use them with. After looking at a bunch of options I settled on Savage Worlds, though I stripped a lot of stuff out of it. My brother Max has since run games using this combo and dubbed it “Paulthulhu”. And now I’ve got another fellow GM asking if I have a write-up for how to do that, so I figured maybe I had better write one.

OK, so to start with we take Savage Worlds. I use Explorer’s Edition (sometimes called SWEX), because I know it well and I bought a couple copies of it back in the day when I was running it regularly. I know there’s a new Adventure Edition, but it sounds like it’s reasonably close and I’ve not heard of enough new things in there to warrant switching. So, if you’re using Adventure Edition, keep an eye out for stuff that changed from Explorer’s Edition that I may not be aware of.

I want the game to be much more deadly much more quickly, so I eliminated soak rolls and I eliminated shaken status. Basically if you take damage we go right into wounds – damage over your toughness is 1 wound, each raise above your toughness is an extra wound. Each wound is a cumulative -1 to everything, and at the 4th wound you’re dead. This makes the game incredibly deadly and players are much more likely to run from danger than towards it, which feels more in line with horror to me.

The downside here is that partially wounded characters are pretty freaking useless in Savage Worlds. Walking around with a -2 or -3 to every roll basically makes your character useless. I saw the worst case of this recently when two players cracked under the pressure and went after each other (which I love), and then proceeded to be totally unable to do any harm to each other due to the massive minuses they already had. I’d love to find a solution to this. Maybe just ditch the wound penalties?

While we’re at it, I removed the bennie system. Without soaking as a mechanic the only use left for them is re-rolls, and that’s just an extra complexity that I don’t feel like I need. All this stuff I’ve removed so far I think are mechanics that push a high-action / adventure feel into the game, which is great when you’re punching nazis, but not so great when you’re running from horrors of the deep. So I’m content to nix the whole thing.

For the most part the skill system is retained as is, but I removed Guts as a skill, and all the default fear/terror stuff in the book that goes with it. I expect to use Insanity Cards by the book for anything fear causing the players encounter. I did consider for a bit hinging insanity card draws on a Guts check, but the cards already have their own pacing system built into them, so why complicate that with more random dice rolling? Players really want to draw those cards, and I want to let them.

No Card Based Initiative

Using cards for initiative is slower than just going around the table. I want to keep the action really quick, so when it really matters who goes first I’ll ask for an opposed Agility roll. Otherwise, I just go around the table during action sequences.

With all the above torn out, you have to take a hard look at edges and hindrances. Many of them play into the systems I’ve ripped out. Are they worth keeping at all? Usually I make this call for each adventure as I’m making characters. Since all my horror games are convention games with pre-gens, I get to do this part by myself during prep. If there are any edges or hindrances that make sense to use for the characters I’m making, I might use them, but often I choose to just ditch them entirely.

Geez, with all that torn out, what’s even left here? I often ask my players before I start a game if any of them know Savage Worlds, and am frankly relieved if none of them do. It’s almost easier to explain what does exist than to have to go through the laundry list of what doesn’t.

What we have is simply attributes and skills, each given a die value. I explain how to roll checks, using the wild die, and exploding dice. We have parry and toughness scores to set difficulties of specific rolls during combat, and the wound system. And we have all the gear from the book. The end.

Ultimately I can’t help but wonder if it’s worth still using Savage Worlds. The main issue I wrestle with around this is what I just discussed with Dan on the last Wandering DMs – crafting the convention pitch. In the listing, what system you’re using is an extra piece of info that may help guide players towards understanding what kind of game you’re going to run. Two fantasy games may have very similar descriptions, but if one is using “D&D 5th Edition” and one is using “Swords and Wizardry”, I know those are going to be two pretty different games.

Great, just what I needed, another project.