Last year I posted about the phenomenon of rising attendance at gaming conventions.  Unfortunately I only have numbers from GenCon to support this argument, other conventions don’t seem to publish their numbers, but I do attend some others and suspect it’s a general trend.  This year I wasn’t able to attend GenCon, but despite my absence it seems their numbers are again through the roof.  I got an email recently in which they claimed “more than 49,000 people attended the convention with attendees from all 50 states and more than a dozen countries.”

Here’s the updated chart from Wikipedia: 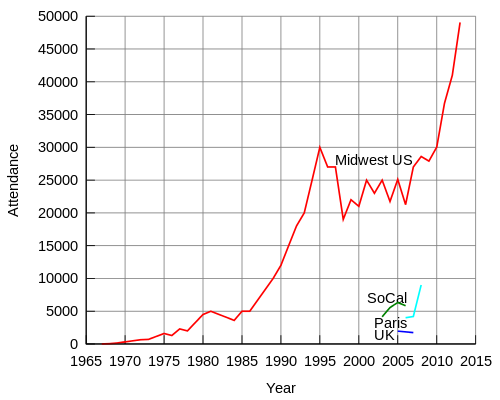 I cannot help but wonder how long this growth will continue, and what on earth is powering it?  Seriously, do I need to worry about a time in the future when the convention is so huge that it’s no longer enjoyable?  I’m not really sure if that is a legitimate concern.  So far GenCon has done a reasonably good job of keeping like activities in similar locations, which I think helps create the microcosm of “your convention” vs. the convention at large.  Unless your tastes are all over the map, chances are you won’t have to spend half the convention running back and forth across town as you’ll really spend most of the time in one of two or three hotels and the main dealer’s hall.  In fact, for the past couple of years I’ve only ever entered the TCG and Miniatures halls on the last day before leaving, just to see the splendor and say so long to the convention.

To put these numbers in perspective I decided to look up another convention which I had a vague idea was significantly larger: E3.  Turns out E3’s attendance last year was actually only 48,200, still a huge number, but actually lower than GenCon’s 49,000.  Another interesting fact is that the first E3 was held in 1996 and drew 80,000 attendees.  It is interesting to note that not only has it shrunk in its lifetime, but the year of the first one has an interesting parallel on the chart above, the first year that GenCon’s attendance started to flag.  Is it possible that in the mid 90’s interest in video games was stealing from tabletop, and that now almost 20 years later that trend has reversed?

All this is just a bunch of silly conjecture based on not nearly enough data I’m sure.  Still, I find this chart fascinating and am excited to see what the numbers are like next year.  More though, I’m just excited to get to go back to GenCon again.  I can’t believe I missed it this year.