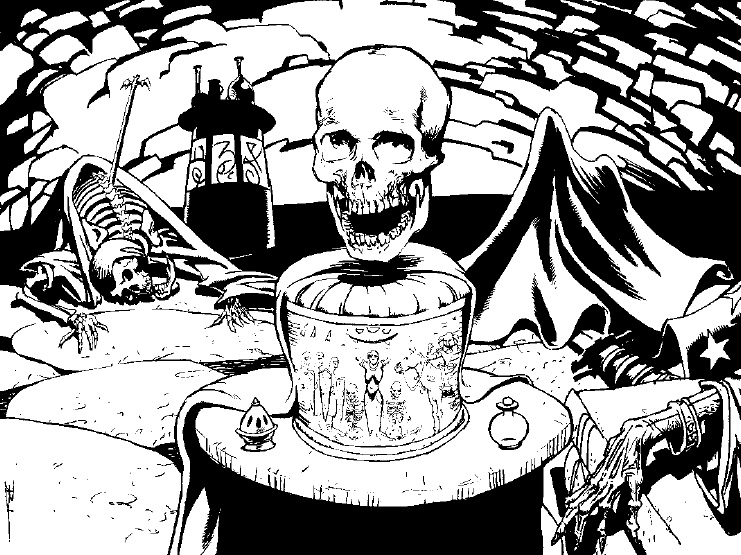 Way back in June I posted about joining a new group playing in a Demon Wars: Reformation campaign, and never spoke of it again.  But that’s not because it fell apart – oh no, I’ve been playing weekly in that game ever since.  For a while my silence was mostly due to simply being the FNG.  It was a new group and a new system and I wasn’t DMing, so I was content to sit back and enjoy playing without really thinking very critically about it.  Eventually I got comfortable with both, and eventually they asked me to DM.  Apparently this group rotates DMing responsibilities fairly regularly, or at least more regularly than any campaign I’ve played in before.  I was happy to take my turn behind the screen, especially knowing that it wasn’t a permanent position and I could look forward to being a player again in the future.

Before I get into discussing the system or the group, let me be clear.  I am friends with authors of this system, some of whom are in the group I’m playing with, and at least one of whom is likely reading this very post.  You’ll therefore have to forgive me if I restrain my critiques in favor of not alienating any of my friends.  And frankly, I’ve always felt the composition of the group far out-weighs the choice of game.  So while I have strong feelings about RPG systems, I’ll overlook a lot to play with awesome players, and this group has that in spades.

That sounds like I’m really dancing around wanting to be very critical of Demon Wars, and that’s not the case.  It is certainly a crunchier system than what I tend to prefer, but I recognize that’s more preference than a reflection of actual quality.  Demon Wars gives players a lot of options to tune their characters statistically, and anyone reading my blog probably knows that’s simply not my jam.  Long ago I wrote a couple posts about my dislike for skill systems, and in that regard Demon Wars has plenty of stuff that I would normally not want in my game.

That said, it’s a detail that’s very easy to overlook as a DM.  Something really unusual that Demon Wars has that I did not realize until I started DMing it is a pretty strong divide between how the game works for players vs. how it works for the DM.  A lot of that crunch is on the player’s side of the screen, and assuming I trust my players (which I do), I can just let them figure it out and not really bother myself with how it works.  It was easy for me to boil down monsters to the six or so stats I actually care about, and then layer in whatever I wanted to imagine, and my players bless them seem happy to roll with whatever I slap into the game on the fly.

We do spend more time moving minis around on a battle mat than my usual games, which makes Demon Wars feel more like 3e to me than old school D&D.  I have tried to infuse some old school concepts into the game though, and in fact convinced the players to let me rip apart the XP system, tying it entirely to treasure discovery rather than monster killing.  The players still do dig killing monsters, but they also really enjoy carousing with not very much prompting from me.  I have a whole plot line now around a rival group of adventurers that sprang up entirely from a carousing mishap.  And they have avoided a few fights when they correctly identified that there was not much treasure to be gained from it.

Knowing that we were going to spend a good amount of time in combat but still wanting to give my players an exploration heavy feel, I thought a mega-dungeon was the best candidate for content.  That way they can engage with the emerging plot as little or as much as they like.  If they get bored with it, it’s very easy to return to the dungeon and search for some more treasure, and so far that’s mostly what they’ve done.

And so, I’ve plunked them into Rappan Athuk.  It was a toss up between this and Stonehell, but I’ve run Stonehell before and was curious to see if I could remedy some of the perceived faults I saw in Rappan Athuk when I got to play it.  Since the group was starting at level one I dropped them into Zelkor’s Ferry first, even though Demon Wars characters are a bit beefier than D&D characters at low level.  I thought some easier stuff as an intro might be best, and I think actually it really helped, even in just making Rappan Athuk feel like the mythical yet bizarrely well traveled location it is.  It also gave me a little practice before we got to the real deal.

It has taken me some time to figure out how to easily translate D&D monsters and traps into Demon Wars, and I think early on I didn’t challenge the group very well.  I hope I’m getting better at that.  In our most recent session I pitted them against a spell caster with a lot of illusion magic and his 5 ogre minions, and I felt like that encounter was cooking better than stuff I’ve thrown at them in the past.  This was a translation of a Rakshasa in the original text, and I think I was so focused on the illusion aspects I forgot to also beef him up in combat, so maybe it wasn’t quite as tough as the text implied it should be.  I had fun though, and I’m looking forward to continuing to refine my ability to translate enemies on the fly while still challenging the players tactically.

The only place the dungeon is suffering is in a feeling of consistency.  I hear the players frequently mentioning how random the dungeon feels.  On one hand, Rappan Athuk does have a lot of stuff in it so jumping around to different locations can feel a bit disjoint.  On the other, perhaps they’re simply not engaging in as much conjecture as groups I’ve run with in the past and I need to push info onto them more.  But the back stories are there if they care to spend time with them, and if not I’m happy to let them continue to rip through monsters and find more loot.  It seems better to let them discover an “aha” moment on their own then try to railroad them into one.