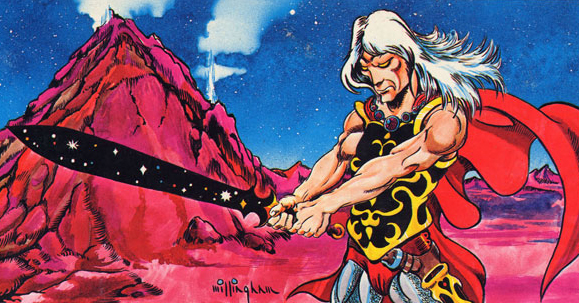 Oh my gosh, I’m writing a “Through the Ages” post!  You thought this was dead – so did I. I was just prepping for TotalCon and printing some character sheets, and I have a couple characters with intelligent swords.  Fun!  I remembered that this always trips me up at the table, especially around when and how to roll for control, so I decided to get out my books and review.  Maybe I should make a little something to go inside my screen to remind me.

As I read through the OD&D rules, I was struck at it sounding more complicated than I remember.  So I got out my B/X and sure enough, it’s different.  So, here we go, let’s start with OD&D (v2, p.29):

The referee adds the Intelligence and the Egoism of the sword (from 8 – 24 factors), and adds an extra 1 for every Extraordinary Ability (from 1 – 4 if applicable). This total (8 – 28) is compared to the total of the character’s Intelligence and Strength (6 – 36) modified by a variable based upon the physical state of the user. If the character is fresh and relatively free from damage (less than 10% damaged) from 1 – 6 points are added to his 29 total (from 7 – 42 then possible). It mentally and/or physically fatigued, or if damage between 10% to 50% has been sustained, from 1 – 4 points are deducted (from 2 – 35 then possible). If damage over 50% has been sustained, or the character has been under a severe mental strain from some form of magic, from 2 – 8 points are deducted (from 0 – 34 then possible).

The core here is that the character and the sword each have a total score we’re comparing.  The score for the sword is basically static.  The character’s score is based on two abilities, modified by a roll depending on how wounded they are.  It can swing anywhere from a positive 6 to a negative 8.  And conveniently sometimes this is linear (+1d6 or -1d4) and sometimes there’s a bell curve (-2d4).  Worse still, once we have the difference it’s not just high score wins, we have to make a second roll.  The player could beat the sword by 5 points and still have a 25% chance of being dominated by the sword’s will.

To make the control check, the DM must find the will score of the user and of the sword.  When the will scores are found, the being with the higher total will score, either character or sword will control the actions of the character.

So, gone is the +1d6 adjustment for being full up on hit points.  Gone too is the second roll based on the difference.  Instead, the sword gets a few more bonuses, based on the plus of the sword and a little extra if the sword is of different alignment.  Side note – in OD&D if a character even so much as touched a sword with a different alignment he’d take damage, though it wasn’t clear if this was repeated so long as it as held or a one-time effect.  Still, I suspect the expectation is the character would not carry around a mis-aligned sword thus it did not play into the fight for control.

The personality strength of a character is: INTELLIGENCE + CHARISMA + LEVEL OF EXPERIENCE. Note level is reduced by 1 for every group of hit points of damage taken equal to the character’s average number of points per hit die for total levels of experience (rangers, for example, getting 2 dice at 1st level). Example: A fighter of 7th level has 53 hit points: 53 / 7 = 7.6 – for every 8 points of damage he or she takes, his or her personality strength will be lowered by 1.

Excluded here is the math behind determining the sword’s personality score.  Similar to before it has an Intelligence and Ego stat that get added together, but then we get a lot more modifiers based on every ability of the sword (each plus, each language spoken, each special ability).  Oh geez, it gets half a point for each language.  Half?  Sheesh.

Interesting here though that we’ve taken away any rolling at all.  It’s a straight stat vs. stat with a penalty to the player based on how much damage they’ve taken.  Granted, the math for the penalty is a little obtuse, but it’s still a far more straight forward than any previous edition.  Also, isn’t it interesting that we can’t seem to decide what we want this final value to be called.  Is it Will?  Is it Personality?

I’m leaving out 2nd Edition AD&D, as reading it over it looks completely identical to 1st edition to me.  Let’s move on the 3.0 SRD:

When a personality conflict occurs, the possessor must make a Will saving throw (DC=item’s Ego). If the possessor succeeds, she is dominant. If she fails, the item is dominant. Dominance lasts for one day or until a critical situation occurs (such as a major battle, a serious threat to either the item or the character, and so on).

First off it’s interesting to note the generalization of “intelligent weapons”, not just swords. The weapon’s stat is now just called Ego, and again we have a nice big chart to calculate that stat based on powers of the item.  There’s no base stat anymore, and the only bit of Ego that does not relate to a benefit of the weapon is the “special purpose” chart, each one granting +4 to the Ego of the item.

On the player’s side, gone is any weird math around attributes and any modifiers based on damage.  It has been boiled down to just a straight Will save.  I guess that’s nice that it’s a common mechanic, but it also feels just a little watered down.  But at least we’ve also gotten back to adding in a random die roll instead of a straight stat comparison.

Also, this is the first time we’ve actually seen how long it lasts.  In AD&D we were given a specific list of the types of actions we could perform, which perhaps suggests we should keep making checks round to round until something happens to break the pattern.  In my own games I can’t say I’ve ever really worried about this, it always seemed pretty natural for when the domination would end.

OK, this is where I get off the boat.  Sorry 4th and 5th players, my experience with those editions is far too light for me to comment.

So where does this leave me?  I don’t know, I think I may have to customize a little here.  At first I was tempted to try and graph out the probabilities of losing control in OD&D, but there are so many factors I just got lost.  So likely I’ll just shift closer to B/X as it has all the elements I like – some randomness, some impact from taking wounds, but overall pretty easy math.  I may decide though to change the specific dice roll a bit.  The alteration between linear and bell curve really bothers me.  Also, I’m worried without the d10 for alignment difference the chances of losing control might be too light.

4 thoughts on “Ego Through the Ages”