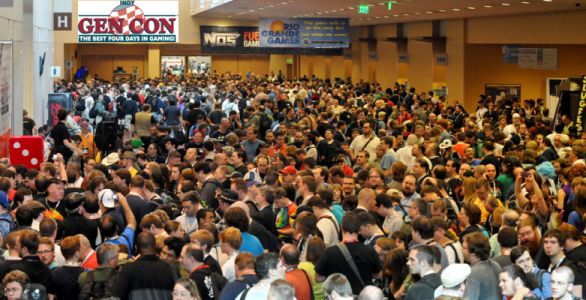 While it’s been several years since I attended GenCon, I find tracking its growth really fascinating.  Wikipedia maintains a nice visual graph of attendance numbers, which I posted in 2011, 2012, and 2013.  Last year was the 50th anniversary, which I surmised would actually attract an even larger crowd than ever.  Let’s check in on that graph and see if I was right. 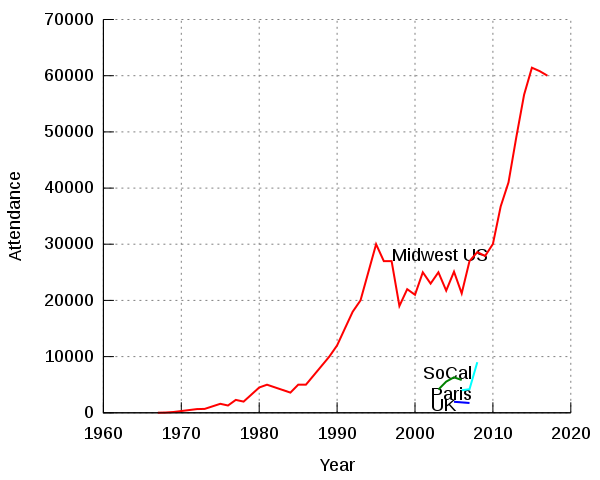 Huh, while the growth has been even steeper in the last few years than in the early 90’s, there’s an odd little downward hook at the end.  What’s that about?  I decided to dig a little deeper.  The raw numbers wikipedia is showing are 60,819 for 2016 and 60,000 for 2017.  That makes it seem like maybe just someone decided to round down recently.  To the source!

Gen Con celebrated its 50th convention with its ninth consecutive year of record turnstile attendance, reaching 207,979, an approximate 4% increase over 2016. The convention also sold out of all attendee badges prior to the show for the first time in its 50-year history.

Oh crap, is it 60,000 simply because that’s how many badges they printed and they sold them all?  Ugh.  I suppose that’s really inevitable, and something I myself have faced in planning my little house convention in past years.  Eventually you run out of room, so the only options are to move to a larger venue or put an artificial limit on attendance.  In fact, both I and GenCon decided on the latter, though in my own case it was more a theoretical limit that we have not yet hit and are able to keep in check by simply not extending the invite more broadly.

I’ve already given up on GenCon, and now attend Origins instead.  But what concerns me here is the idea that GenCon may just be the leader in a general trend.  I took a look the Origins Wikipedia entry, and while they don’t have a nice chart, they do have raw numbers starting in 2002, so it’s easy enough to produce my own: 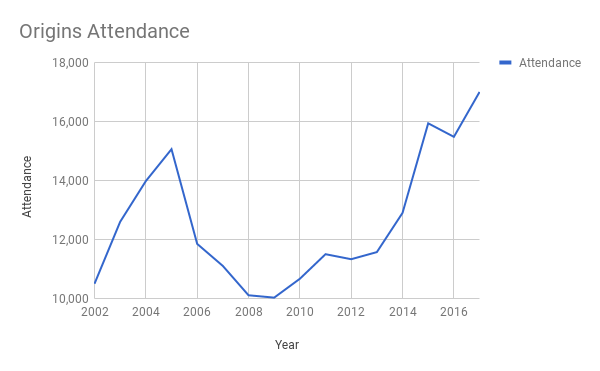 OK, something weird happened to Origins between 2005 and 2009, but from that point forward we’re seeing pretty steep growth.  Is it the same for smaller local conventions, like TotalCon or Carnage?  That’s hard to say, as they don’t publish numbers, but I wouldn’t be surprised.  Both of those conventions have moved locations in recent years, and while I’m sure space was not the only issue that made them move, I wouldn’t be surprised to learn it was one of them in both cases.

I have pretty mixed feelings on this trend.  On the one hand, I’m happy to see the popularity of my favorite hobby increasing.  On the other hand, I really don’t want to get shut out of going to conventions.  I suppose at some level if demand continues to rise then we should expect supply to increase as well, which should mean there’s always a newer smaller convention you could drop into when your favorite big convention gets too big.

What other options are there?  I suppose fragmentation is a possibility – more conventions could crop up with a stronger focus on a particular part of gaming (eg. RPGs, board games, miniatures, etc.)  But that’s actually counter to the trend I’ve seen.  If anything, the biggest conventions seem to be homogenizing.  What really is the difference these days between PAX, ComicCon, and GenCon?

Well, if history has taught me anything, it’s that I’ll always find a way to play games with cool people.  So probably I shouldn’t freak out too much.  Still, what a fascinating thing to watch.  I did not expect this direction when I first posted about this back in 2011.  I’ll be curious to see what my posts look like in 2025.