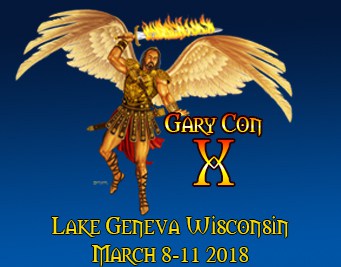 This year I am clearly over-doing it with the conventions – I have TotalCon in February, HelgaCon in April, and between them, GaryCon in March.  Yup, this year for the first time ever, I’ll be attending GaryCon.  I’ve wanted to go for many years now, so I’m super excited, and what better time to go than this their 10th anniversary?  Even better, I’m going with my good friend Delta, which is sure to make it extra fun.

Tomorrow is game registration so I’ve been spending a lot of time tearing through the event listings and winnowing down my choices.  As this is the first year I’m attending I’m not running anything myself, and I’m not sure what to expect from registration.  Will it be a mad rush with tickets to everything selling out in minutes, like GenCon?  Will it be more chill such that I have a reasonable shot of getting into at least some of the games I like?  Just in case I’ll be logging in right as the bell rings tomorrow.  In the immortal words of Mell Brooks, “hope for the best, expect the worst.”

There are few interesting twists going for this particular convention.  First, they sell premium badges that give you early access to registration.  This means some of the more popular games are in fact already sold out, which is both good and bad.  On the one hand, I’ve already missed out on getting into those games, on the other I can just dismiss them out of hand up front, and maybe the competition for what remains will be thinner.

Another thing going for GaryCon is the simply the sheer number of interesting sounding events.  I guess I’m just lucky in that the more narrow focus of this particular convention happens to line up right with my personal interests, so there’s just a ton of games I really want to play.  Of course this could make registration annoying if I have to keep plugging in choice after choice, but at least I have 4th and 5th choices for most time slots.

Finally, it looks like there are some quasi tournament like games being run.  These games have words like “Open” or “Invitational” in them, that harken back to the old D&D tournaments of the late 70’s.  Also, the sheer number of tickets (often in the 20-50 range) suggests that they’ll be running multiple separate tables of these games.  At least one even definitely has a second round that you can’t buy tickets for – you have to “win” the earlier round to get in.

Not only does this make it a little easier to get into those games (there are simply more tickets), but the idea of playing anything that replicates an old style tournament really gets me excited.  I mean, this very blog has a whole category devoted to Tournaments.  One of my primary time-machine fantasies is to go to early GenCons to witness the birth of D&D and the resultant early tournament scene.  This may be the closest I ever get to that.

Well, for now at least, that’s all I have to share about GaryCon.  At this point GaryCon is pure potential for me with no real facts to report.  But you can bet I’ll be posting details as they unfold.