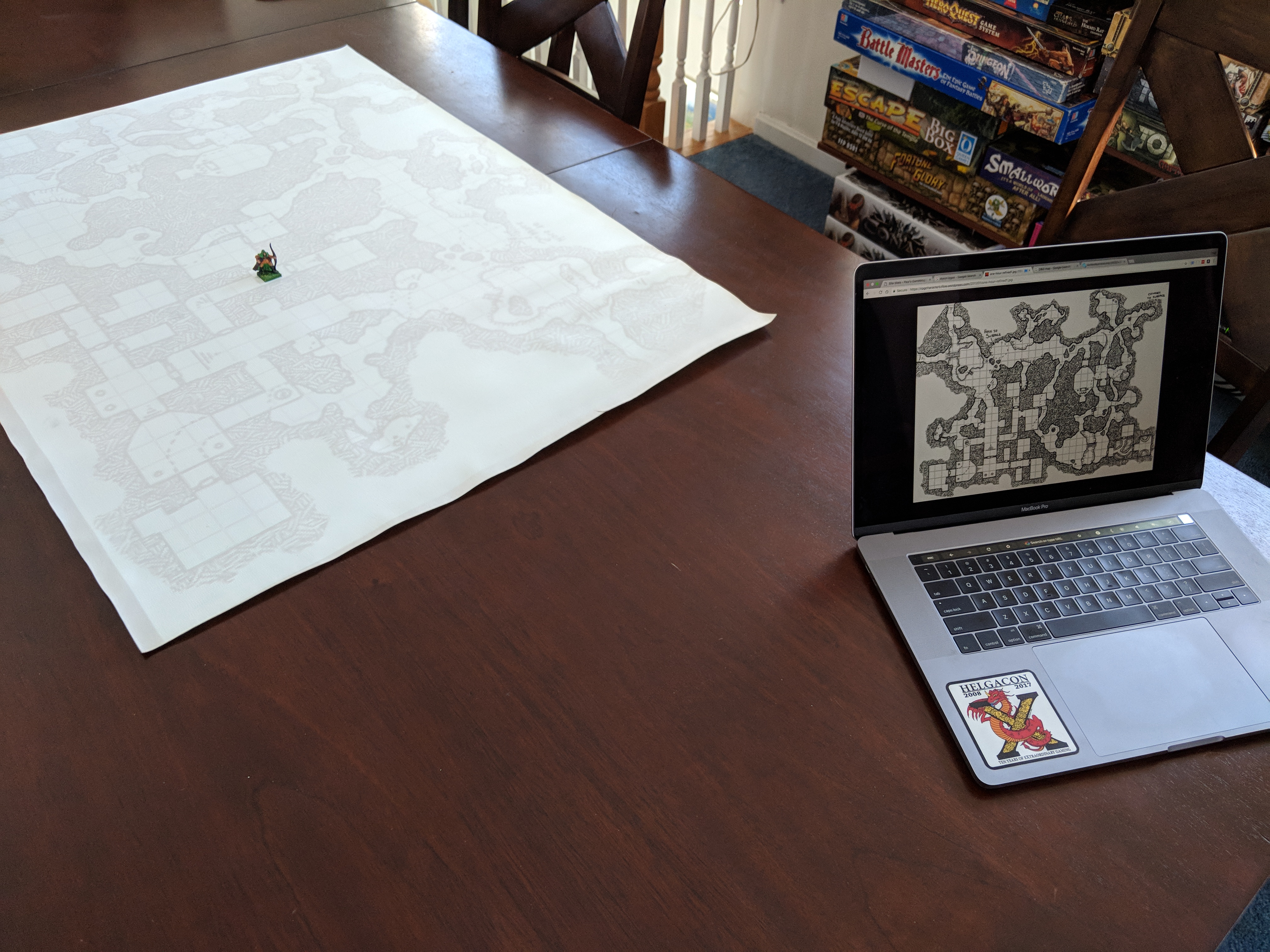 I finally had the chance this weekend to attempt a little gaming project I’ve wanted to do forever – rigging a projector above my gaming table to use as a battle mat.  I know a lot of folks have done something like this before, and probably much fancier than mine, but projectors have gotten very small, light, and cheap recently such that I thought I could give it a try without too much investment.  I’m not totally sure what I’ll use it for yet, but ideas are percolating.  Here’s what it looks like right now: 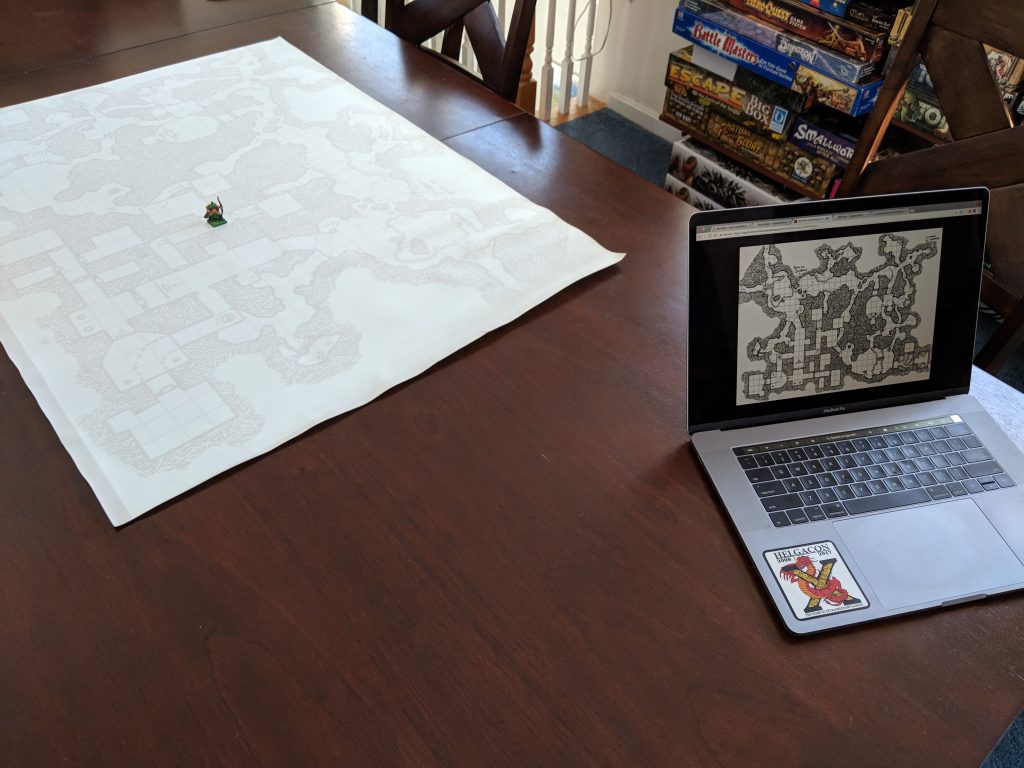 I’m using ChromeCast to project the image so there’s no cables needed.  The white cloth is a square of vinyl bought at the fabric store, which also conveniently can be drawn on with wet erase markers.  The projected image is a little washed out due to it being broad daylight right now.  Black and white maps look OK, but color maps are tough to read.  I did do some experiments last night and I know at night it’s going to look way better, but even this I think is pretty usable as is.  Here’s a closeup: 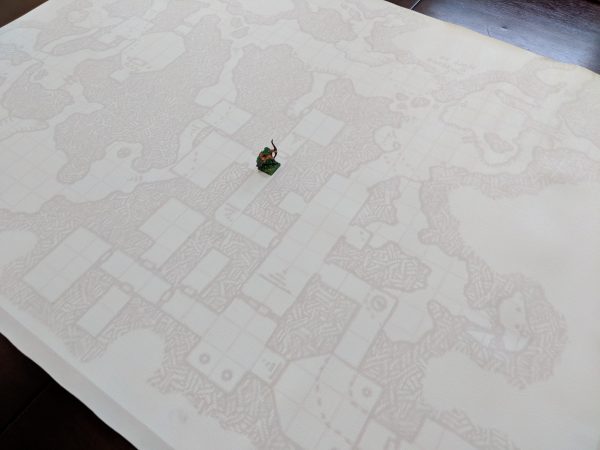 I want to replace the ChromeCast with something that supports AirPlay, so the projected image can just act as a second monitor.  I also need to look into some tech to flip the image.  I’m using a mirror to redirect the projector so the image is backwards. I imagine there must be software out there that will flip or rotate an entire screen, but I stopped myself from googling “osx pervert image” just in time.

Here are some images of the projector rig itself: 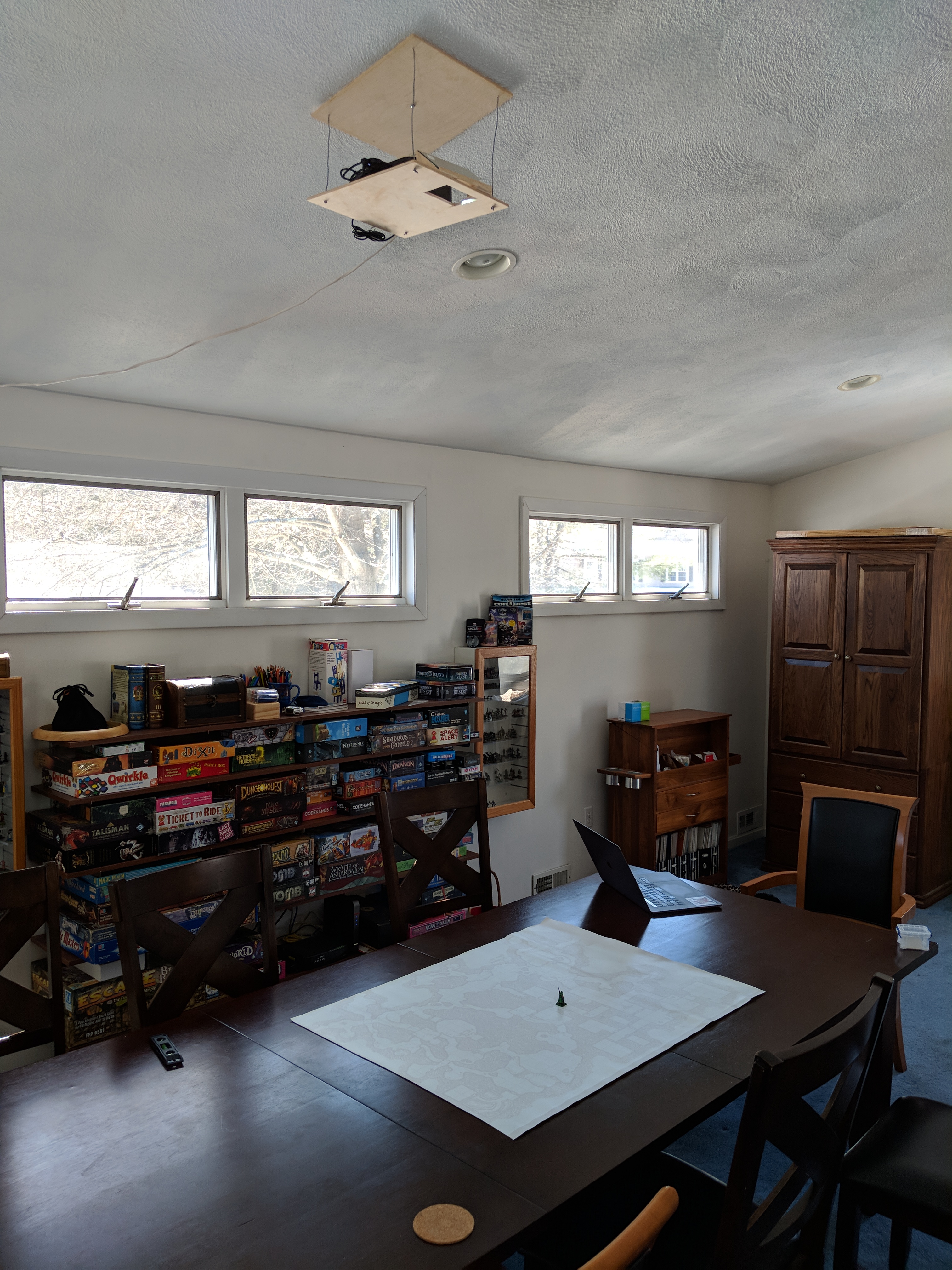 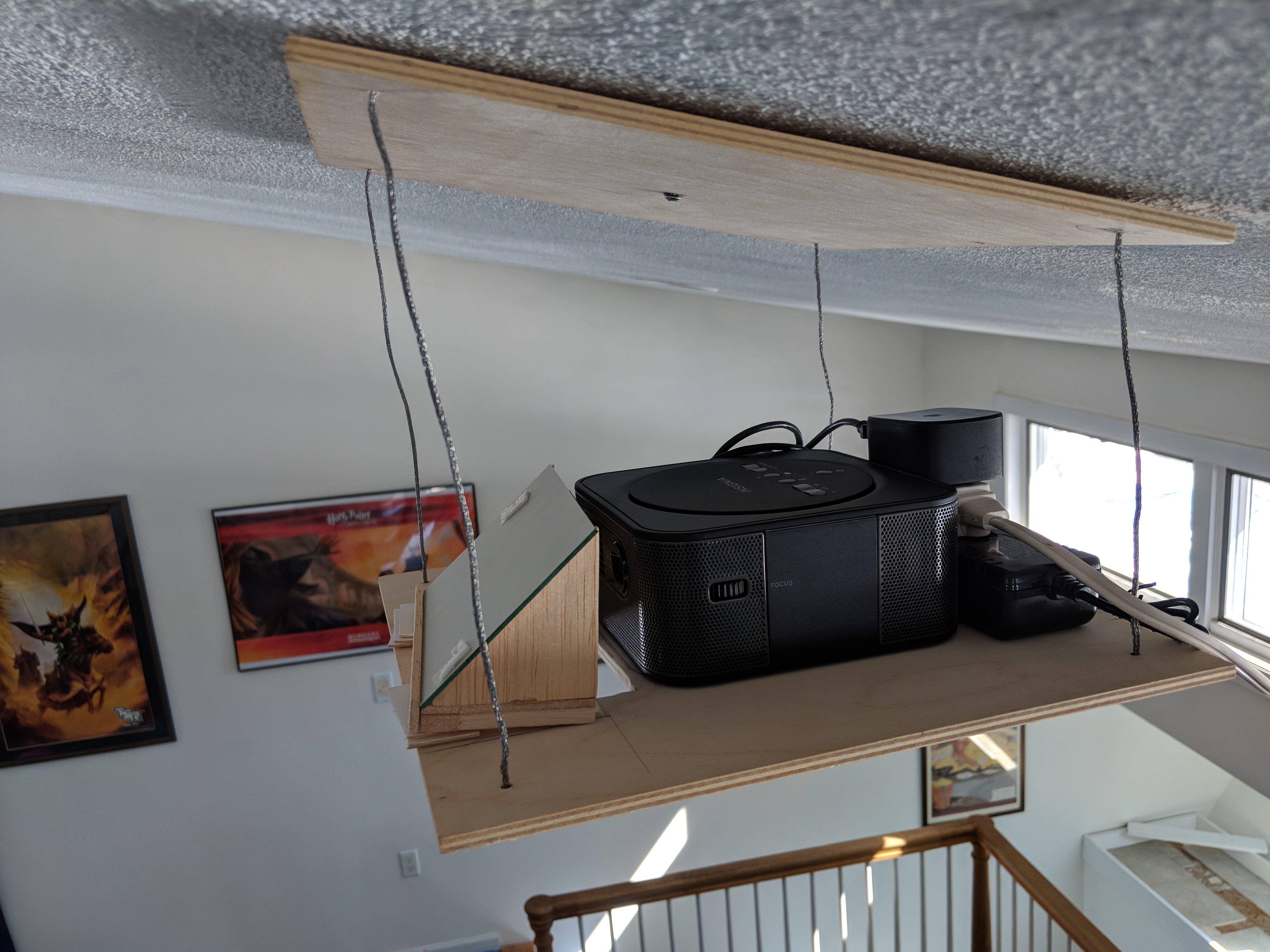 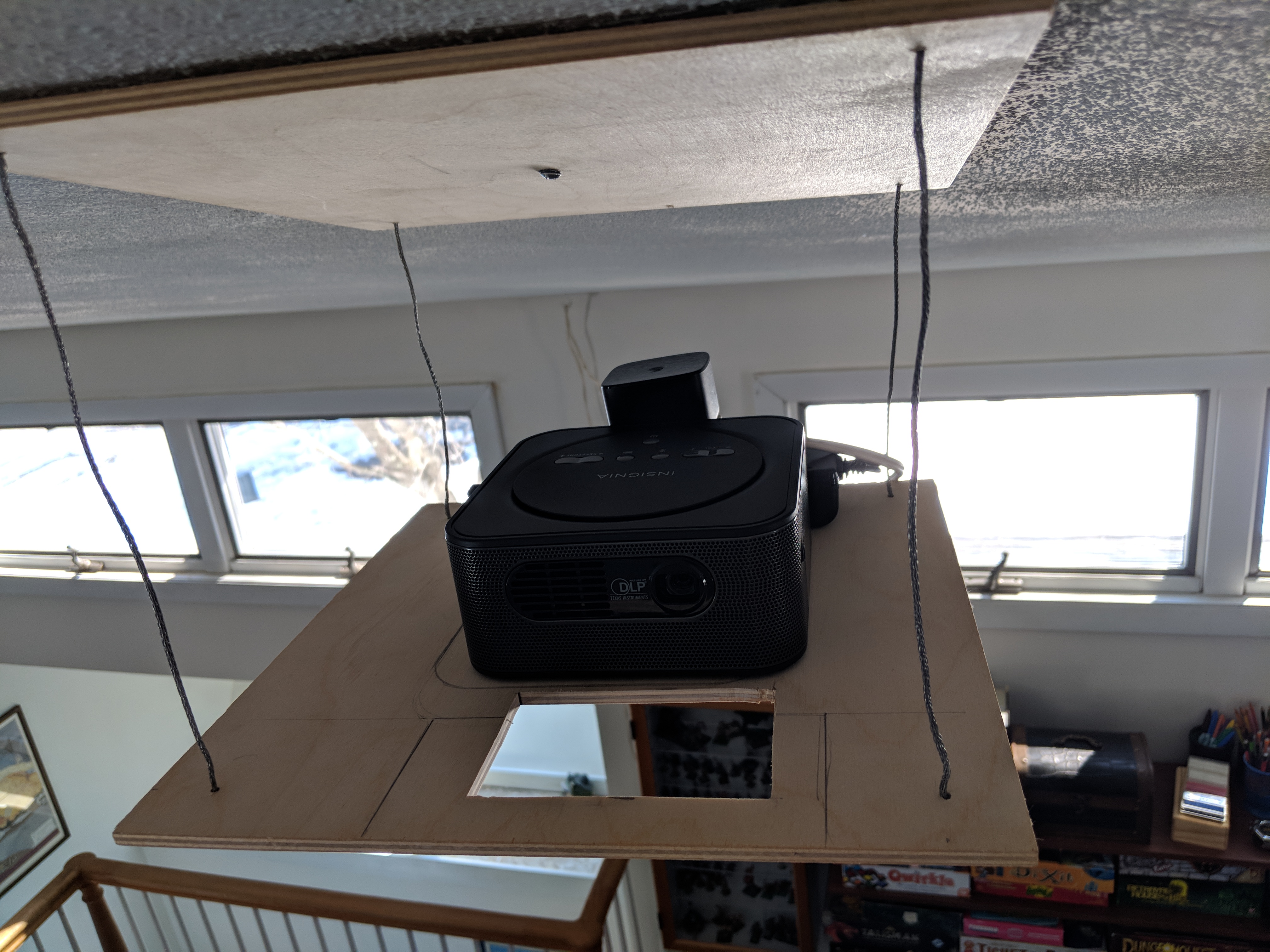 Basically it’s just a floating shelf attached to the ceiling.  My ceilings are quite high in my game room, which is nice to make sure the image fills a good part of the table, but the slope makes it kind of a pain for keeping the shelf level. I ended up using two pieces of wood, one to anchor to the ceiling and one to hold the projector, held apart by picture hanging wire.  The wire is stiff enough to feel stable while malleable enough to easily adjust individual lengths to get the thing level.

I cut a hole in the bottom piece of wood and built a little wedge thing to hold the mirror in place out of balsa wood.  The projector is quite small and light (fits in one hand), but I really wanted to keep everything as light as possible given that the whole thing is held up there with just a single heavy duty drywall anchor.  I wanted to keep the impact on the ceiling as minimal as possible.  When not gaming you can take the whole thing down and only a small bit of silver anchor is visible, and that I may touch with some white paint to really hide it away.

I went through a couple revisions before landing on this.  I had an ill-fated attempt with no upper piece of wood and the four corners held up by string to a single hook – the whole thing tipped while I was working on it and while I luckily caught the projector as it fell, the mirror hit the table, leaving a good ding on the table and breaking itself in half.  Fortunately the mirror is quite cheap and easy to replace — it’s a clip on mirror for a car’s sun visor bought at the local hardware store for $4.  I bought two more, just in case.

I’m looking forward to finding a real use case for this thing.  I’ll post a report if and when that happens.