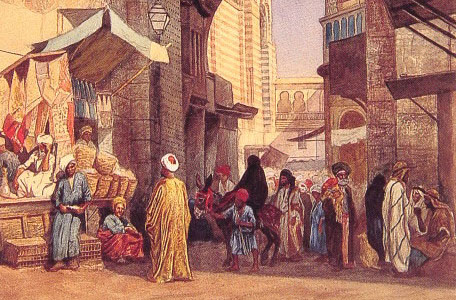 OK, as long as we’re talking about improv at the gaming table, let me tell you of the time the carousing table gave me D&D gold.  I was running an ongoing campaign for a group of friends and at the end of the night they returned to town.  My rule for carousing was that it had to be done in town and could only be done once per session, so they decided to end the night with some quick carousing rolls.  As we were packing up one player, let us call him Tom, missed his check and had to roll on the mishap table.  The result was as follows:

One of us! One of us! You’re not sure how it happened, but you’ve been initiated into some sort of secret society or weird cult. Did you really make out with an emu of was that just the drugs? Roll Int check to remember the signs and passes.

Now, we didn’t really have time to deal with the outcome as everyone was leaving, so I offhandedly said “Tom goes out drinking with some new friends and the next morning he’s not there when the rest of you wake up.”  Everyone went home with the expectation of dealing with this development next week.  Now, I know you’re thinking, this isn’t really improv if you had a whole week to come up with ideas.  But you see, once everyone left it was out of sight out of mind, and I totally forgot about Tom’s predicament until we sat down at the table the next week.  And to make things more interesting, Tom wasn’t able to play that week.  So what happened?

The players started wrapping up their town activities and prepared to re-enter the dungeon.  One or two of them decided to go out and ask around about what happened to Tom.  So I told them that some of the folks at the tavern they were hanging out at remember seeing him leave with a man in a purple turban.  Where did that come from?  I have no idea, I just wanted to give them some memorable detail they could follow up on later.  I was assuming they would let it lie since we all knew Tom wasn’t going to be able to rejoin the group regardless and maybe the next week they could follow up on where Tom and the man in the purple turban got to.

OK, thinking on my feet I told them about how there is a guild of silk merchants in town.  They are from far off lands to the East, but maintain their presence in the town for the purposes of trade.  They like to wear turbans and long flowing silken garments to show off their wares.  I think at this point the players figured out they could use a locate object spell on some of Tom’s gear to pinpoint his location.  As they make their plans I started flipping through the Monster Manual looking for something more nefarious for the players to deal with, and ended up on the Rakshasa.

Oh, that’s kind of cool, they eat people and have lots of illusion magic.  I decided that Tom was lured into a Rakshasa’s den who is using illusion magic to disguise his dungeon where he keeps his future meals locked up.  I also decided that a tiger head is a give-away, so I changed it to that of a bull, not even thinking that the players are going to mistake him for a minotaur.  Whatever.

The players invaded the basement of a building that appeared to be full of draped silks and soft cushions, at the center of which a man reclined smoking a hookah with Tom and several others.  Tom is clearly somewhat out of it, mumbling incoherently and the players are unable to pull him up to his feet.  One of the players, however, made his save and sees exactly what is going on – there are no cushions or silks, just bloody victims chained to the walls and a hulking bull headed creature where their smooth talking host stands.  After a few nervous moments he finally decided to throw caution to the wind, yelled a warning to his friends, and attacked.

Eventually the players killed the rakshasa and pulled a delirious Tom back to their inn.  They then start hatching plans – the silk guild must go down.  They send out invisible party members to stake out the main guild house while others rest and regain spells.  Crap, I didn’t realize that wasn’t the main guild house, but the players seemed convinced so I rolled with it.  I described a high walled enclave with interesting foreign looking onion-domed towers within.  Guards are stationed at the only gate through the high walls around the enclave.

One of the players decided to approach and question the guards as to who comes and goes through the gate.  Only members of the guild, of course.  But, the players ask, are there any events coming up where non-guild members might behold the wonders of this fabulous and exotic guild house?  Hmm, “yes and…” right?  OK:  “Why yes strangers, there is a masquerade this very evening!  Many tradesmen are coming to deliver the finest victuals and decorate the guild house for those lucky few who have warranted invites to our masters’ ball!”

So I gave my players an in, they can disguise themselves as delivery men and infiltrate the guild house, right?  Nope, they go back to their inn and then come up with ways to steal or forge invites to the party.  I don’t actually remember which they did, but either way they figured out how to get into the party and they’re stoked.  The silk guild is going down!  They’re so into it that I figure I can’t let them down, so I’m going to have to whip up the interior of that silk guild.

The first thing I figured I’d need is a map.  I searched through my content for something appropriate.  I remembered that Skull Mountain has a part with three connected domes, and I used some part of that adventure already with this group so I might as well scavenge this unused map.  I grabbed the map and started thinking about what might be inside.  I made a quick doodle of the walls around the buildings which don’t exist in the adventure it came from, and I decide there must be some lovely gardens between the towers and the walls.  Maybe it’s largely an outdoor party, still only guild members allowed in the buildings themselves, so the players will have to stealth in at some point.

Eventually someone alerts the guards, and I decided to keep with the Arabian Nights theme and make the captain of the guard an efreeti.  All the players flock to the fight and push their way through.  They eventually face down the seven sisters as well, and make their way into the large central circular room, looking for the guild master.

The map says there’s a big pool in the middle of a large circular room, built a bit like an enclosed amphitheater.  What can I put in there?  I wanted to keep going with my half-man, half-animal motif, and come up with a giant with a hippopotamus head.  I figured as the guild master he just reclines in his pool and issues orders, and since he’s mostly immobile I want to give him some good defenses.  Since everything is dome shaped, how about an anti-magic shell?  That’ll drive my players insane.

The players eventually killed all the guards, made it to the final boss, and killed him too.  The end result was so good that I actually use this final encounter now as one of my bossfights for breakfast, complete with anti-magic shell, hippo-headed guy, and seven alluring were-tigers.  My players were really thrilled with the entire thing.  It was one of the best session we had in that campaign, and the whole thing was off the cuff just trying to “yes and” my players.  They eventually went back into the dungeon, but I think to this day they still love to tell the tale of the time they took down the silk guild.

2 thoughts on “The Silk Guild”