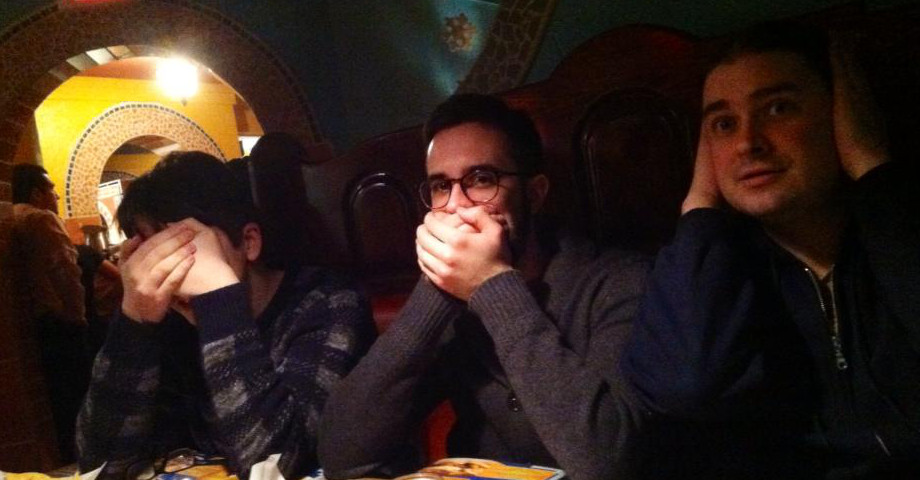 I am certainly not the first person to mention how much roleplaying games benefit from the improv concept of “yes and.”  Here’s a good post about it, but if you just google “yes and roleplaying games” you’ll find a plethora of articles.  The practice was on fine display at HelgaCon, perhaps because I played more with my brother Max’s friends than I have gotten to in the past, and many of them happen to also be pretty active in the improv comedy scene.

Max ran a game called “The Mechanics” at HelgaCon, wherein our heroes were a group of paranormal investigators, ala the X-Files.  Each character had a certain set of skills, but more importantly, a very strange piece of equipment or two.  Personally, I played a character who had a set of false mustaches, the hairs of which came from a certain esoteric creature with psychic abilities.  If I placed a mustache on myself and a target, I could read the target’s thoughts, and it wasn’t limited to just people – it was surprising how many things in the world it turns out actually have thoughts.  Why a mustache though?  According to the character sheet it was just for a bit of fun.

We also had a character who had a two dollar bill that could speak to all money across time.  Another had a demon trapped in a phone that he could call for prophetic advice, which he claimed was actually the spirit of his dead mother.  Another player could travel back in time exactly ten seconds — he tried eleven seconds once and accidentally started the War of 1812.  These wacky elements in turn encouraged a certain humorous style of play.  A lot of funny accents and idiosyncratic behavior emerged.  But the best part was, we all bought in to each other’s madness as if it was perfectly normal.

This lead to frequent encounters with an NPC who was having a fairly normal reaction to the strange events around him, who then had to deal with talking to eight insane people.  It turns out it’s kind of hard for one person to contradict a crazy statement when seven other people all agree with it.  The climax of this was halfway through the game when we decided to call in a nuclear strike on the town and thus basically completely destroyed Max’s entire game.

You see, Dan had a silly item on his character sheet labelled something like “launch code for a small tactical nuke”.  Max says he figured he would use it as a threat in arguments with the rest of the party.  Silly GM, he though the players might actually disagree on things – we pretty much never did.  So after ramming our van into the side of a mysterious weather station (how else would you avoid the killer eagles trying to swoop down on you?) we sent out an automated camera to spy around and discovered a dead body.  What was our reaction to this slightly spooky discovery?  Call in the nukes, of course.

Dan proposed deploying the nuke and everyone was immediately on board.  We even used the time travel a couple times to make the best possible escape.  As we fled from the mushroom cloud forming over the town we were meant to be saving, Max had to excuse himself for five minutes to “figure out what the hell to do next.”

Of course, these kinds of moments are basically what I’m constantly looking to introduce into my games.  What is the point of carousing tables if not to inject some pure chaos into the game and force me out of my comfort zone and down a road I never imagined or planned for?  The best moments in roleplay, the things we tell stories about, are never the carefully planned bits the GM authored ahead of time.  They are the spontaneous madness that erupts from half a dozen or more different viewpoints colliding in the context of a singular linear narrative.

The game was one of those games where I had to frequently catch my breath from laughing so hard.  Unfortunately I was so wiped out that by the last hour or so I simply couldn’t contribute any more, but honestly I didn’t have to.  There were still seven others pushing the envelope, and I was more than happy to sit quietly and listen to the exciting conclusion.  In the past I have been so wiped out that I’ve had to excuse myself from the Saturday night game to go to bed, but this time I moved only a few feet away to a couch so I could hear the game.  I am so glad I got to hear the end, and only wish I had enough energy to stay up and dissect it as I understand several players did.

What was that conclusion?  So, eventually as things started to fall apart and the players found themselves in a very bad situation, Dan swiped the time travel device in a last ditch effort to save us all.  He did exactly what you’re not supposed to do – he tried to wind back time at least a good ten minutes.  He lost control, time kept slipping backward, and soon he found himself back in the van having just deployed the nuke.  The missile was incoming, Dan hopped into the van, the driver hit the gas… and the van stalled.  The end.